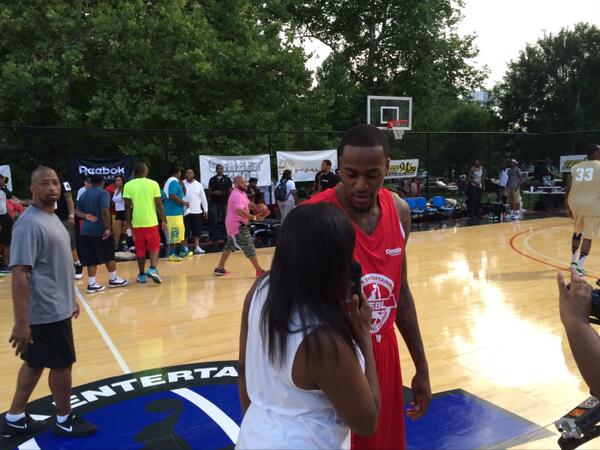 Yesterday afternoon, the city of Atlanta poured out to Central Park in the historic Old Fourth Ward to see some great outdoor basketball action.

Sponsored by Reebok, Kind Snacks, Land of Fly and Georgia Sports Physical Therapy, the Atlanta Entertainment Basketball League kicked-off their second season with a brand new court, new teams and some new treats for fans. Founded by Jah Rawlins, the league was introduced to the city last year. Combining basketball and entertainers, Rawlins bragged that, “the A.E.B.L is the closet thing you will see to the Rucker in the south.”

He didn’t disappoint this year.

One of the biggest surprise that he brought to the league this year was a hardwood court. Praters Flooring brought out the court. It took a few hours on Saturday to get everything laid down, but after they did, the games were ready to be played.

That was until the rain came. 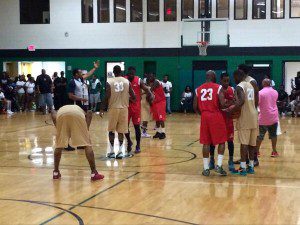 Atlanta’s fickle weather forced the games to be pushed back by an hour. Fans of the league didn’t budge. They stayed sitting in the park until the rain stopped. After the rain clouds passed, the tarp came off the court and the action began.

In between action, those in attendance were treated by a performance from Forbes Music Group/Atlantic artist Ques. The “OG Bobby Johnson” rapper performed his new hit “F*ck Around.”

After he wrapped his set, we got back to the game.

The highlight match-up of the day was a re-match of last years championship game between 2 Chainz’s Street Execs vs Trinidad James Gold Gang. Last year, Trinidad played through out the season for his team. He wasn’t present for last nights match-up due to a business conflict, but that didn’t stop the show from going on.

As the game was about to begin, the weather intervened once again. Rather than cancel the game, it was moved to an indoor court that was near the park.

In front of a jam-packed gym, Street Execs and Gold Gang gave the fans everything they came for.

Street Execs broke out to an early 18-6 lead over the defending champs. After Gold Gang coach J. Ross called a time-out, the squad came back out with a new attitude. They stormed back to cut tie the game before the end of the 1st quarter.

The game was tight from that point on. Both teams traded dunks, three pointers and highlight plays for the rest of the game.

When the final horn sounded, Gold Gang showed why they are still a team to be reckoned with. GG pulled out a 60-55.

The Atlanta Entertainment Basketball League will have games every Saturday and Sunday throughout the summer. The championship game will be played August 10th.

For more information, check out AEBLhoops.com