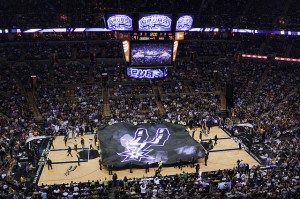 After the San Antonio Spurs’ masterful conquest of the Miami Heat in Game 5, FoxSports.com reported this on June 15, 2014:

“San Antonio will face questions — as it has for years — about the age of its core, and whether Duncan, Ginobili and Popovich want to stick around.”

One of those questions is: How many more championships will the Spurs win with their current core?

The biggest consideration for the future success of the current Spurs core is the one that has been there from the very first title in 1999: Tim Duncan.

The Big Fundamental has been the face of the Spurs franchise ever since he first put on that San Antonio fersey. David Robinson, the guy who passed the torch to him, was his partner when they played the role of the Twin Towers back in 1999. Robinson is now retired, and is an investor with the Spurs. After the Spurs won their fifth title, The Admiral said this about Duncan via SportingNews.com:

“And when you look at the NBA, this is a team that can still keep winning. It is hard to see who could beat them next year after a series like this. Tim is the leader in there. Of course we would love to have him back.”

Duncan is the leader of the Spurs. He isn’t statistically dominant as he once was in his prime, but he’s the big game player who’s always there when the team needs him the most. Added Robinson, via SportingNews.com:

“You saw him out there, how effective he was. Tim can turn it on when he needs to, when the team needs him to.”

Duncan turned it on in Games 5 and 6 of the Western Conference Finals against the Oklahoma City Thunder. He also did the same to the Heat in Game 1 of the Finals. Other than those games, Duncan played better than his regular season stats, but he let the rest of the team win the games for the Spurs.

A lot of people are speculating that Duncan will retire this offseason, and those people have grown in number after the Spurs won the title. However, the only valid reason these people have is that Duncan is 38 years old and that they all want to see the good guy ride off into the sunset with a title in his last NBA season. Other than that, Duncan was just as relevant to winning the title this season as he was in 1999.

So for the Spurs to continue winning, Duncan has to return, at least for next season. For that to happen, Timmy must opt in.

In a recent one-on-one interview with Kristen Ledlow of the Inside Stuff, Manu Ginobili hinted at his basketball future. In a report by FanSided.com on June 15, 2014:

“The native Argentinian has suggested in the past that he may soon call it quits, but it appears the return to winning ways has sparked Ginobili’s desire for the game as he recently stated he plans to play at least another year or possibly two as he told NBA Inside Stuff host Kristen Ledlow.”

2012-13 was the second-worst field-goal shooting season in Manu Ginobili’s career. It was also the second-lowest scoring season of his career. The Spurs also had just lost a heartbreaking seven-game series in Miami.

Endless injuries rendered Ginobili to miss games and play inconsistently at times. So it wasn’t any wonder why Ginobli hinted that 2014 could be his final season. However, the return to the Spurs winning ways and Ginobili’s stellar play in limited minutes has Manu itching for more wins and more rings. As reported by ExpressNews.com on June 4, 2014:

“Manu Ginobili says he’s coming back next season. ‘For sure,’ is the way he put it Wednesday.”

Winning has definitely changed Manu’s mind. Like Duncan, critics were calling for Manu to retire simply because he’s 36 years old and has been injury prone for the last few seasons. However, apart from his receding hairline, Manu didn’t look a bit his age when he played in the 2014 playoffs. Like Duncan, he was money in the bank when the Spurs needed big games, big plays, and big shots. Remember the killer three-pointer in the dying seconds of Game 6 against OKC? That shot forced overtime and stabbed the Thunder right through their hearts.

Duncan has kept his silence, but Manu’s played 11 seasons with Timmy. He knows the Big Fundamental like a brother. If Manu says he’ll be back, he’ll most probably be back.

Gregg Popovich has coached 18 seasons with the San Antonio Spurs. His head coaching tenure at San Antonio started the year before Duncan came to San Antonio. He is the only NBA coach that Tim Duncan has played for, and the one who’s won all five NBA titles for the Spurs.

When the question of retirement was popped to Gregg Popovich, he said this in a report by FoxSports.com on June 15. 2014:

“I don’t feel tired. I mean, I’m tired today, but I mean in general. I’d like to continue to coach (beyond this year).”

Popovich, like Duncan and Ginobili, were counted out by their critics for next season. 2014 for them was supposed to be winning and walking away, or losing and limping away, but like they’ve been counted out in almost all of the previous seasons, the Spurs have proven otherwise. With this fifth title, it looks as if they’ll be back next season.

To complete the return of their version of the Big Three, let us move to Tony Parker. Like Duncan, Ginobili, and Popovich, Parker has been with the Spurs all throughout his NBA career. Parker said this in via MySanAntonio.com on December 29, 2013:

Parker was talking about the end of the four-year contract, which he signed in 2010. Parker said that he wanted a contract extension, but without his guys, staying beyond 2014-15 still hangs in the balance.

Two of the Spurs key reserves will be unrestricted free agents in the offseason, Boris Diaw and Patty Mills. With the way they played in the Finals, they could become hot commodities in the free agency market.

A third free agent is Matt Bonner, but his role with the team has decreased and he could be easily signed by the Spurs.

As for Mills and Diaw, SpursNation.com reports:

Help is the best thing that $5 million can do. And with the other teams willing to pay more to upgrade their rosters, that may not be enough. Diaw is aging and is French, like Parker, which could entice him to stay. Mills is young and confident; things may be different for him.

Surprisingly, all the other Spurs are signed only up to 2014-15, with the exception of Tiago Splitter. Splitter is signed until the 2016-17.

Blueprint For the Future

If we look at the current contracts for this Spurs team, it’s pretty clear that they anticipated a rebuilding process after the end of Duncan’s contract, if he opts in. Duncan’s contract is co-terminus with Manu and Parker, and since these three have been the pillars of the team for the last decade, the Spurs franchise was preparing for the end. Without these three, the Spurs would be a different team. As former Spurs star Sean Elliott said via ESPN.com:

“‘All I know is they’re irreplaceable,’ said Spurs lifer Elliott, now San Antonio’s color broadcaster and a close friend of Duncan’s to this day. ‘You can’t replace ‘em. It’s gonna be an entirely new era here in San Antonio (when they’re gone).’”

No one can replace Duncan, Ginobili, and Parker when they leave. That is why the Spurs have left 2015 and beyond a huge blank.

The Spurs are one of the most calculated franchises in NBA history. Their continued success since 1999, along with winning titles in three different decades with the same core of players, is a testament to that. However, they also know that they cannot fight father time.

It is perhaps 99 percent clear that everyone returns next season, except maybe for Patty Mills. If Mills leaves, that would be a huge loss, but knowing Pop, he already knows his next move. The Spurs looked scary this season because they dominated the regular season and won 62 games without a single player logging more than 30 minutes per game. They won with a formula and a system, and that is tough to beat.

In the Finals, they demolished the two-time defending champion Miami Heat by an average margin of 18 points per game. They swept the Heat on their home court, and they beat a team with three NBA All-Stars in their primes. They showed mental fortitude to just even make it to the Finals after last year’s heartbreaking loss. It’s tough not to say that the Spurs are the favorites to repeat next season. In fact, it would be an understatement to call them favorites. The Spurs are expected to dominate next season and win back-to-back titles.

That being said, beyond 2014-15 is a question that will be answered in due time. Even Manu said it will only be one or two more years for him. Most probably, it will be one year.

Malik Rose, a former Spurs player and a good friend of Duncan said this via ESPN.com:

“I would bet money Pop and Tim leave together, and it’s gonna be really, really cool.”

What about all of them splitting up except for Splitter? That’s possible, but not probable. When Duncan and Ginobili leave, the money and the team will be turned over to Kawhi Leonard and Danny Green. The point guard role will be Parker’s if he stays, but that would be a totally different team.

Yet with the Spurs and the system that disregards superstars, we all know now that anything is possible with teamwork.