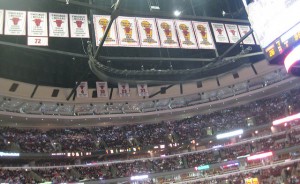 Image courtesy of Tony B/Flickr. Can the duo of Kevin Love and Carmelo Anthony bring another championship banner to Chicago?

There was a time long ago when the Chicago Bulls were the face of the NBA, and for die-hard fans of the Bulls those memories of glory never seem far off when reminiscing.

Taking over the NBA throne seemed like destiny for the Bulls when Derrick Rose won MVP back in 2011. A star player with the drive and talent that only comes along every so often, coupled with an amazing supporting cast and an amazing defensive-minded coach in Tom Thibodeau spelled out championship team in gold ink. Life has a funny way of derailing destiny. A few significant injuries and trades here and there, and the expectations plummeted.

Well, it’s the offseason once again, and Rose is apparently healing well. No more flashy hype to promote his return and that means no more lofty expectations from fans around the world. During Rose’s absence from the team, Joakim Noah became the Defensive Player of the Year, and Taj Gibson evolved to become a Sixth Man of the Year candidate. Rose is coming back to a team that’s stronger, and more dedicated than ever. Although some key players are gone, the Bulls are capable of redesigning their team to knock off the top dogs of the East.

Rumor has it that both Kevin Love and Carmelo Anthony may be thinking about going to the Chicago Bulls. The words “maybe” and “possibly” are thrown around a lot, but what if one of these superstars makes it to the Windy City? Anything is possible in the NBA, and both of these players would make the Bulls better.

Let’s first take a look at Anthony. Noah apparently has been trying to hook him in to the idea of wearing red and black since back in February, during All-Star Weekend. Anthony can definitely be the offensive juggernaut that the Bulls need. Last season he had a pretty amazing line: 27.4 points and 8.1 rebounds, shooting 45.2 percent from the floor and 40.2 percent from behind the arc. Rose will definitely get his points, but having another player that has the ability to create his own shots will really help the Bulls on the offensive end. There were times this past season where they just struggled to produce on offense because there were no players that could efficiently and consistently create their own shots. In 2011, the gameplan to stop the Bulls was to stop Rose. The team is definitely stronger now, although they do have to re-mesh with a rehabilitated Rose, but adding Anthony would relieve them of their offensive woes.

On the other hand, is Love. Rose and Kevin Love are actually workout partners, according to the Sun Times, and rumor has it that Rose prefers Love over Anthony. The big man is a rebounding machine, and is also an offensive threat that even has a three-point bomb in his back pocket. This past season, Love averaged 26.1 points, 12.6 rebounds and 4.4 assists per game. Imagine both Noah and Love holding down the paint. Any player coming down the lane would have to think twice before rising over those two bigs; it may even be the best front court since David Robinson and Tim Duncan.

So, who would be the better fit for Chicago? Love has the edge because he is an offensive threat, but he can do more than just get buckets. Of course, Anthony has that clutch factor, but Love is also capable of draining shots when the game is on the line. From a defensive perspective, Anthony isn’t going to make any All-NBA Defensive teams any time soon. Thibodeau’s intense defensive system might be too much for Anthony. As of right now, it seems like the Bulls are trying to acquire Love, and that means they may have to sacrifice some talent.

According to NBC Sports, the Bulls have put together a trade package of Taj Gibson, Tony Snell and their 2014 two first round picks to Minnesota to get Kevin Love into a Chicago uniform.

All the Bulls need is Love. Or do they need to keep it Melo? We’ll sit back and relax as the NBA offseason unfolds.