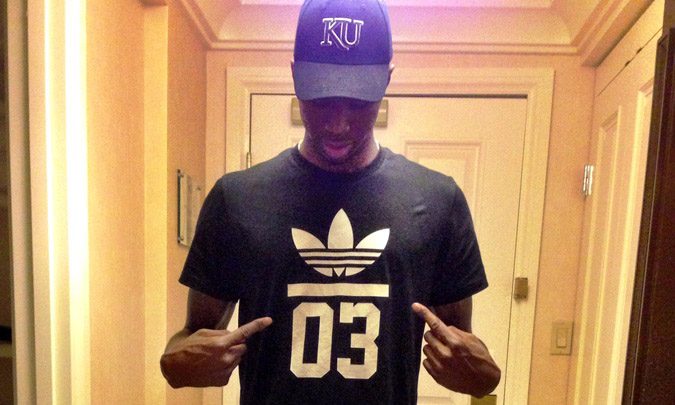 adidas today announced an unprecedented partnership with Andrew Wiggins, the No. 1 overall pick of the 2014 NBA Draft by the Cleveland Cavaliers. The 19-year-old, 6-foot-8-inch wing out of The University of Kansas is expected to make an immediate impact in the NBA with his superior athleticism, smooth transition game and strong ability to drive the lane.

“Joining the adidas family is a blessing and an honor and I am extremely excited for what lies ahead. Knowing that this elite brand is welcoming me into the family with such esteem gives me a great deal of pride. Our collaboration couldn’t be more organic both personally and professionally and I look forward to moving to the next level with the brand,” Wiggins said.

Wiggins, a Toronto, Canada native, racked up an impressive list of accolades during his freshman campaign at Kansas. The highly anticipated NBA prospect was named the Big 12 Freshman of the Year, first-team All-Conference and second-team All-American. During the 2013-14 season, Wiggins averaged 17.1 points per game, the highest scoring average ever for a Jayhawk freshman. Prior to his career at Kansas, Wiggins earned 2013 Naismith Prep Player of the Year, Gatorade National Player of the Year and McDonald’s All-American honors. Elite athleticism runs in Wiggins’ family, his mother, Marita Payne-Wiggins, was a two-time silver medalist sprinter for Canada in 1984 and his father, Mitchell Wiggins, was a first-round pick in the 1983 NBA Draft.

“Partnering with an elite talent of Andrew’s caliber continues our momentum and investment to the future of adidas,” said Chris Grancio, adidas head of global basketball sports marketing. “With our recent partnership success with first-time NBA All-Stars Damian Lillard and John Wall, and cultural icons Kanye West and Pharrell Williams joining the brand, we’re excited to welcome Andrew to the adidas family and we look forward to him contributing to our brand’s success for years to come.”

Wiggins is the second member of the 2014 Draft Class to join the adidas team alongside Danté Exum, who was drafted by the Utah Jazz as the No. 5 overall pick. The two will add to a group of elite adidas Basketball stars highlighted by Derrick Rose of the Chicago Bulls, John Wall of the Washington Wizards and Damian Lillard of the Portland Trail Blazers. Wiggins will be featured in a variety of upcoming adidas initiatives and will play a critical role in the development of basketball footwear and apparel.