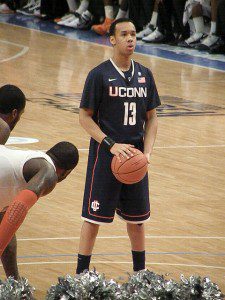 Brought to you by our friends at Fantasy Basketball Money Leagues

The 2014 NBA draft was considered one of the richest and deepest in terms of talent. Most experts agreed that there were 35-40 players who could step in right away and land a spot on any NBA team. That being said, like in any draft, there is always the cream of the crop.

Here are the top 10 NBA draft picks that will produce immediately, and should highly be considered for your 2014 fantasy basketball team:

Andrew Wiggins looked every bit of a star on draft night. His floral suit defied the laws of fashion. A report by NESN.com:

His tailor Waraire Boswell — who also has dressed LeBron James, Blake Griffin and Chris Bosh – told Women’s Wear Daily that the white rose print usually is reserved for European royalty. It’s super-exclusive, and we were told it was for when royals vacation or go to a country club,” Boswell said. “It’s a European bird’s-eye fabric. I guarantee no one will have anything even close to what he’s wearing.

His style and taste are a preview of his game. No doubt, even with the high-scoring Kyrie Irving in town, Wiggins will dazzle the NBA with his moves and scoring. Wiggins became the highest scoring freshman in the storied history of the University of Kansas with his 17.1 points per game. He can go on a scoring spree at any time, as when he scored 41 points against West Virginia, or he can do it on both ends of the floor, as when he scored 17 points and grabbed 19 rebounds against Iowa State.

That being said, of course, Wiggins has had his lows, like his three-point output against Oklahoma and his four-point performance in Kansas’ season ending loss to Stanford. However, if he was confident about wearing a floral suit on draft day, he’s going to have one big rookie season ahead of him.

Every expert conceded that Jabari Parker is the most NBA-ready among the current crop of NBA freshmen. Hence, there is no reason he won’t produce immediately for your fantasy basketball squad next season, and his numbers will attest to that. Taken from ESPN.com on June 26, 2014, this excerpt is about Parker:

Parker is one of three freshman in the last 15 seasons to average at least 19 points and eight rebounds per game while shooting 35 percent from beyond the arc, according to ESPN’s Stats & Information. Kevin Durant and Michael Beasley were the other two.

At 6’8″, Parker can play multiple positions with his skill set and will cause a lot of matchup problems. Parker can create his own shots, run the break, and post up. He is probably the most complete offensive player in this draft. The chink in his armor is his defense, but it’s not a glaring weakness. Parker should have no problem adjusting to the NBA game.

Many expected the Orlando Magic to pick Dante Exum with the fourth pick, but there must be something about Aaron Gordon that made them change their mind.

I think initially when he enters the NBA he’s ahead of the curve for a rookie with his ability to defend, because he can defend multiple players and he’s a great defensive rebounder. He’s really intelligent off the ball, and he can do a lot of different things that usually you get with a veteran, older player. Aaron’s going to come in and he has amazing talent on that end of the floor. Same thing with rebounding. His rebounding numbers speak for themselves.

Gordon averaged 12.4 points, 8.0 rebounds, 2.0 assists, 0.9 steals, and 1.0 blocks per game in his lone season at Arizona. His scoring numbers won’t be Wiggins-like, but they’ll be fairly decent, and his rebound numbers, along with other defensive stats, could be elite already.

Just as we were surprised with the Magic picking Gordon, the Utah Jazz were surprised to see Dante Exum available at No. 5. Although they have Trey Burke, they drafted on talent and not position.

But isn’t Exum a “tweener” guard? Yes, and here’s what he said on draft night about playing with Burke per NBCSports.com:

The Australian team, Patty Mills and Matthew Dellavedova, and I’m in that system, and those are both point guards. So you work around it. I think I already spoke to [Burke], and he’s excited to have me, and I’m excited to be there. I know we’re both going to give up something a little so everyone’s happy.

Utah coach Quin Snyder was a point guard at Duke University, so he’s the best guy out there to utilize Exum. Unlike the other NBA draft picks, Exum doesn’t have many stats available, except those of his much publicized 2013 FIBA under-19 World Championship stint where he averaged 18.2 points and 3.8 assists per game. The lack of info on Exum may scare many fantasy basketball owners away at first, but numbers don’t tell the story on his true potential.

Does Marcus Smart mean the end of the Rajon Rondo era in Boston? Not necessarily. In a report from NESN.com on June 27, 2014, Celtics’ managing partner Wyc Grousbeck said:

Here are Smart’s numbers at Oklahoma State: 16.6 points, 5.9 rebounds, 4.5 assists, and 2.9 steals per game. The Celtics worked him out three times before draft day, so they have a clear idea of who he is and how they want to utilize him, with or without Rondo.

We like the fact that he’s an instigator. Red [Auerbach] told me that you need instigators, not retaliators. He’s a bull.

If he’s indeed a bull, we might need a matador to tame his stats.

Julius Randle is the Los Angeles Lakers’ highest lottery pick since James Worthy, who was taken No. 1 overall back in 1982. The 6’9″, 250-pound power forward has an NBA type physique that looks ready to rumble with the big boys in the NBA.

Randle averaged 15.0 points and 10.4 rebounds per game while shooting 50 percent from the field as a freshman at the University of Kentucky. He led the nation last season with 24 double-doubles, which is the second-highest ever for a freshman in NCAA history, behind Michael Beasley’s 28. Randle may only be 19 years old, but the Lakers believe he is ready.

In particular, Randle turned heads with his tenacity in a game of one-on-one against Lakers assistant coach Mark Madsen, followed by two-on-two against members of the Lakers’ support staff.

If the kid can rumble with the Mad Dog, then he’s going to be a beast, and may even be a steal in 2014 fantasy basketball drafts.

The 6’6″ Stauskas led Michigan in scoring at 17.5 points per game as a sophomore, while scoring at least 20 points in 14 games. He also dished out a team best 118 total assists last season for the Wolverines.

Stauskas hit more three-point baskets than two-point baskets during his sophomore season, and he was one of the nation’s best three-point gunners. That three-point shooting is what will make him contribute right away, not only for the Sacramento Kings, but for fantasy teams as well.

That being said, Stauskas is more than just a shooter, as ESPN’s Jay Bilas reports, via MLive.com:

Nik Stauskas, I think, is the best shooter in this draft. But he’s far more than a shooter. He’s got a complete offensive game. He’s got a swagger to him.

The Kings were 28-54 last season, and if there was something obviously missing from that team, it was swagger, not talent. Stauskas changes that picture, according to ESPN.’s Bill Simmons on June 27. 2014:

Remember when Manu (Ginobili) came in with the Spurs he just came in with an attitude? He was a little bit fearless, always an irrational confidence guy offensively. I like this pick for them. I actually support this one.

The mystery of passing on Dante Exum was answered when the Magic traded for Elfrid Payton. Orlando needed a point guard more than a power forward, and they knew that all along. Here is Payton, as described by NBCSports.com on June 23, 2014:

Payton averaged 19.2 points, 6.0 rebounds, 5.9 assists, and 2.3 steals per game during the 2013-14 collegiate season. With Jameer Nelson in the final year of his partially guaranteed contract, Payton is the point guard of the future for the Magic. And without depth in the 1 spot, the Magic will break him in right away, which could be a sign of a steal for fantasy basketball enthusiasts.

The Chicago Bulls traded picks Nos. 16 and 19 for Doug McDermott. BleacherReport.com (June 27, 2014) has the reason behind the trade:

Three-point shooting was one of the Bulls’ biggest problems last year. They finished 26th in made three-pointers and 24th in three-point percentage in the 2013-14 season. In McDermott, Chicago receives one of the best long-range specialists in the draft.

The Bulls were looking for a fix, and they may have a fit. McDermott was a career 45.8 percent shooter from three-point distance in four seasons at Creighton. He made a total of 274 career threes and scored a total of 3,150 points during his collegiate career.

Undoubtedly, McDermott is the best scorer in this draft with his 26.7 points per game last season. Aside from that, he also averaged 7.0 rebounds per game and shot 86.4 percent from the foul line.

The Bulls will benefit from the maturity of the 22-year-old McDermott as they gear towards a championship run with the return of Derrick Rose and the possible addition of a big-name free agent. McDermott was National Player of the Year last season while leading Creighton to a 27-8 record.

What the King wants, the King gets. When LeBron James was salivating over Shabazz Napier’s winning pedigree and championship experience, the Miami Heat moved heaven and earth to get him. So when the trade to land Napier was consummated, James had a simple reaction via Twitter:

My favorite player in the draft! #Napier

Napier averaged 18.0 points, 4.9 assists, 5.9 rebounds, and 1.8 steals per game last season for UConn. He was voted as the Most Outstanding Player in the 2014 NCAA tournament after leading the Huskies to their second title in his four seasons there. Unfortunately for Napier, LeBron wasn’t long for Miami, packing up and moving back north to Cleveland. Fortunately for fantasy owners, however, that leaves more touches for the UConn product.