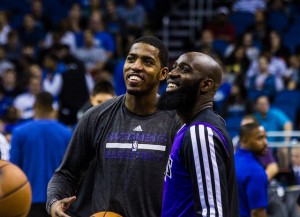 Image courtesy of RMTip21/Flickr.  Jason Thompson (left) and Quincy Acy (right) chat it up during warmups.

Two of the Sacramento Kings’ most team-oriented and energetic players have been traded to the New York Knicks.

A trade being finalized on August 8 will send Quincy Acy and Travis Outlaw to the Knicks in return for guard Wayne Ellington, forward Jeremy Tyler and a second round pick in the 2016 draft. Pete D’Alessandro and the team’s front office announced the trade early Wednesday afternoon.

“We want to thank Quincy and Travis for their contributions to the Kings organization,” D’Alessandro said. “We all wish them great success in their careers moving forward.”

Acy was sent to Sacramento during the 2013-14 regular season, as he was involved in the same transaction which dawned the arrival of Rudy Gay and Aaron Gray from the Toronto Raptors. Many hoped for Acy to be developed into a stretch four to play alongside DeMarcus Cousins in the Kings’ frontcourt, but it may have been in the plans from the start to trade away his contract. He will be owed just shy of $1 million in the 2014-15 season.

Outlaw has spent three of his eleven years in the NBA with the Kings, with whom he spent most of his time as a role player, leaving most of the ball handling to his point guards and utilizing his length on defense. He was never a special player with the Kings, but his willingness to fall into any needed role is scarce in a league full of such loud personalities.

The arrival of Tyler and Ellington will not have any immediate impact on the team. Tyler, a bulky power forward with unpolished post moves, signed a minimum contract with the Knicks. His two-year, $1.5 million contract will not likely affect the Kings. The team will most likely waive him to save as much as possible, which is the reason for the trade overall.

Whether or not the Kings are looking to attract a free agent after this season remains to be seen, but it is not out of the question that these attempts to clear as much cap space as possible could be part of a bigger picture.

It could also be the reason that the Kings are reportedly looking to use a stretch provision on Ellington, a shooting guard out of North Carolina who has averaged 6.4 points over his five years in the league. He is owed $2.77 million next season.

Sacramento will likely continue making transactions to clear as much space as possible, as the list of possible free agents who will likely be available has been rising steadily. Whether the Kings aim to extend Rudy Gay’s contract or attract another piece to the team is unknown, but fans can rest assured that the team’s management and ownership has something in the works.