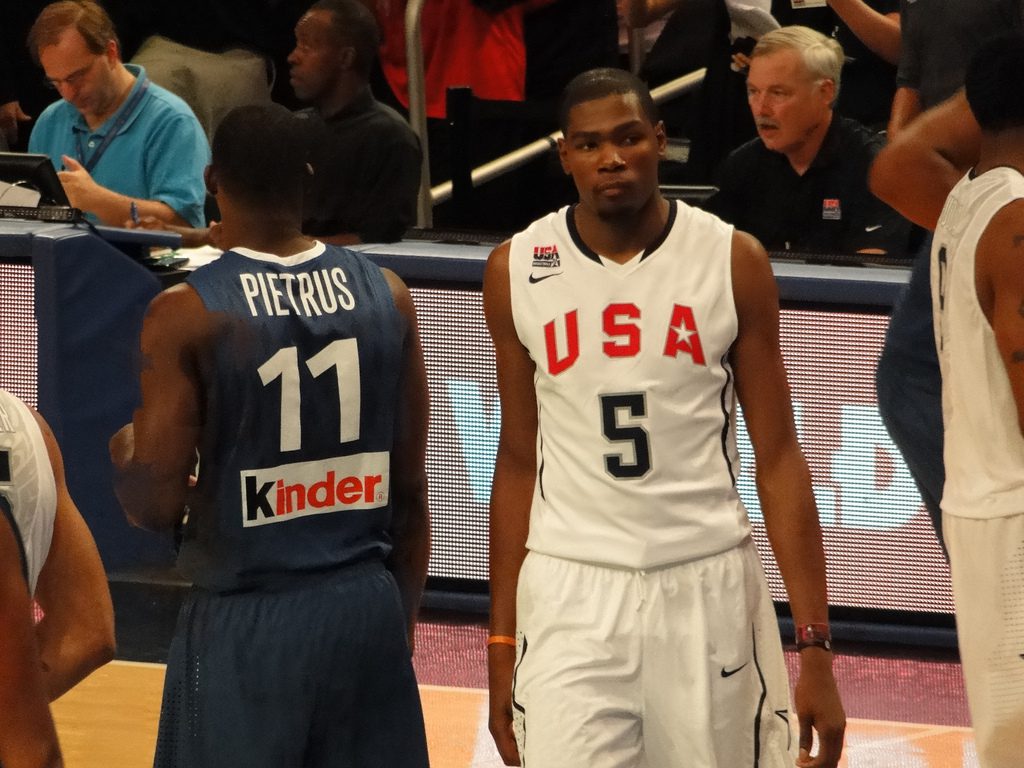 Calm down, Indiana Pacers fans. I know this summer has stung, but the Paul George injury and even the pullouts of Kevin Durant, Blake Griffin, Kevin Love, Russell Westbrook, and LaMarcus Aldridge will barely dent Team USA’s chances of striking gold at the 2014 FIBA World Cup.

With a young, vivacious squad that includes the likes of Kyrie Irving, Derrick Rose, Anthony Davis, James Harden, Stephen Curry, and Kenneth Faried, doubts are minimized in the lead-up to the Cup. Coach Mike Krzyzewski is hoping the new team layout will mend the damage left by these late extractions from the roster.

Not to mention, the remaining five seats on the flight to Spain are unfinalized, but will include more bright young athletes such as guards Damian Lillard and Demar DeRozan, centers DeMarcus Cousins, Andre Drummond, and Mason Plumlee, plus the likes of second “Splash Brother” Klay Thompson, as well as Rudy Gay, Chandler Parsons, Kyle Korver and Gordon Hayward, all of whom are under fervent consideration while vying for spots in training and through the team’s friendly exhibitions.

In short, it may not have been the original “Dream Team” that had you excited when it was initially comprised, but, my goodness, it’s still a remarkably talented team when put to scale with anyone else.

That said, nobody dismisses the FIBA second-ranked Spaniards as no-hopers. They are the hosts of this sixteen-day tournament. They also have two of the most talented centers in the NBA with brothers Pau Gasol and Marc Gasol, as well as nifty point guards Ricky Rubio and Jose Calderon.

Not to mention, they also have the strong, physically disruptive power forward that is Serge Ibaka, who established he has fully recovered from the playoff-ending injury he had with the Oklahoma City Thunder.

That’s a mean team, the clear frontrunner positioned behind the US, but who else is liking their chances at winning?

Argentina is ranked third globally in basketball, according to FIBA, but lost their marquee talent and playmaker in Manu Ginobili, and, currently, are left with center Luis Scola, point guard Pablo Prigioni, power forward Salem Safar, guard Nicolas Richotti, and small forward Marcos Mata – a modest array of players unlikely to strike fear into the Americans, or even the much larger Spanish force.

Also, while the FIBA rankings categorize Brazil as tenth in the world, aside from Spain, they are the US’s biggest threat.

The Brazilian team have two quality NBA centers in Tiago Splitter, who made his mark during the NBA Playoffs for the San Antonio Spurs, and Anderson Varejao, who is expected to play an important defensive role in the Cavs 2014-15 championship run.

For a reality check, let me also make a side note that the US men already closed out Brazil in a 95-78 win on 8/16, where the expected Brazil lineup was fully intact and equipped with all of these weapons, although this was only a friendly exhibition match.

It’s safe that Brazil are a great distance behind the states, as well as Spain, but are positive about trying their chances elsewhere.

Let me scatter about some bits and pieces about some other participants:

– The Lithuanian national representative is ranked fourth worldwide, and has a reliable, but very fresh roster that has players competing in many top leagues from all corners of the world. One team highlight is towering NBA center Donatas Motiejunas, who is currently contracted to the Houston Rockets.

– Milwaukee Bucks breakout star Giannis Antetokounmpo the “Geek Freak” will be the headline maker for a solid European participant in fifth-ranked Greece.

– Seeing top NBA draft pick, guard Dante Exum in action for ninth-ranked Australia is fascinating. No Patty Mills or Andrew Bogut, though. Those losses could be crippling for the Aussies.

– Spurs star Tony Parker is sitting out this FIBA World Cup, but hope remains for France, who still have another piece of the deep San Antonio in power forward Boris Diaw, as well as NBA players Evan Fournier and Nicolas Batum. Flawed team, but with some potential to make it through late in the tournament.

– Serbia well-rounded as always with the likes of shooting guard Bogdan Bogdanovic, guard Nemanja Nedovic, center Rasko Katic, but likely to flounder with few key pieces to guide them.

– Slovenia have one of the hottest shooters of 2013-14, Goran Dragic, but he may be expected to carry this team a bit.

– Turkey are the biggest threat to the US in the group stage, featured along with New Zealand, Ukraine, Finland, and the Dominican Republic.

Now that I’ve digressed onto opinions and thoughts on the rest of the tournaments participants, I go back to the very thesis offered in the title, “Are the Team USA dropouts a blessing in disguise?”.

For the competitive nature of this event, comparable to the FIFA Soccer World Cup in layout, but certainly not stature or, well, competitiveness, absolutely.

While the injury of Paul George left many fans grief-stricken, the chain of pull-outs by the aforementioned Durant, Love, Griffin, Aldridge, and Westbrook assures the safety of these superstars for the upcoming league season, all while promoting this extra-curricular activity for some of the nation’s finest developing players, and perhaps assuring some impediment for the US team throughout.

It’s us against the world, and, maybe now, the world seems a little less dwarfed, and our patriots will have to dig a little deeper than expected to secure advancement through the stages.

The players will have to earn the mirthful fulfillment of victory, which will be evermore sweet being tasked for something with as much pride surrounding it as your home nation. It is an experience that won’t be forgotten by any involved, and a crucial part of maturation for these players ahead of their upcoming NBA seasons, as well as possibly a part of the 2016 Olympic team – we shall see.