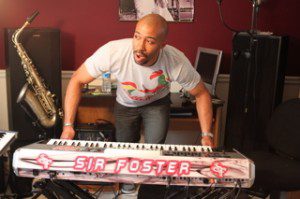 The news out of the 404 was devastating. On the heels of the Donald Sterling racial scandal came to light a revelation of a leaked email of Atlanta Hawks part owner Bruce Levenson making questionable statements concerning race. Despite being in the spirit of business decisions for a franchise floundering near the cellar of attendance for as long as anyone can recall, they were in very poor taste.

Does this man simply want out? Does he even watch or attend games? We can’t be sure after the inclusion in the email of slamming the music in the arena. He certainly paid no attention to the breakout star of the 2014 NBA All-Star Game, one Sir Foster, who happens to play DJ in his very own Philips Arena.

“… the music is hip hop,” states Levenson in the email. “while i (sic) don’t care what the color of the artist is, i want the music to be music familiar to a 40 year old white guy if that’s our season tixs demo.”

Well, that wasn’t hip-hoppy at all. That was just plain bitchin’.

Then again, I’m a white 40-something so I just might be out of touch in Levenson’s mind. Wait, that’s not how it’s supposed to go.

Personally, I’ve been a big fan of Sir Foster for a couple of years now, just happening to hear his organ sing in the background of a Utah Jazz-Atlanta Hawks game one evening and inquiring on Twitter who it was that was making me smile and tap my foot on the hardwood floor of my living room. This was the most electric background noise I’d heard at a sporting event since I was a child hearing an organ played live at a baseball game.

This man is a treasure. To imply the music at Hawks games is out of touch with virtually any demographic is ludicrous and wreaks of lunacy.

Sir Foster became a celebrity for his breakout performance at the last All-Star game, leading him to be profiled many places including GQ Magazine:

NBA All-Star Weekend came and went, but one thing that basketball fans can’t get out of their heads? Covers of hip-hop classics like “Stay Fly, “Public Service Announcement,” and “Whistle While You Twurk,” as played by Sir Foster, the in-house organist for the Atlanta Hawks, who was given the gametime keys at NOLA this past weekend. SB Nation reports that Atlanta fans get treated to his pop covers on a regular basis, and the man’s repertoire ranges from hip-hop, to rock, to even cult pop culture tunes. Just check out his covers of Hulk Hogan’s ’90s theme song “Real American” that turns into Bon Jovi’s “Livin’ On A Prayer,” which he busted out at halftime during a Hawks vs. Bucks game in 2010.

So, it’s not all “hip-hop” after all? Anyone that’s a fan of the man could have told you that. Sir Foster has been the organist for the Hawks since 2010, so the musical assertions of the 2012 email from Levenson aren’t even accurate.

How does he decide what to play? Last year PeachTreeHoops caught up with Sir Foster before he was the most popular musician literally in the NBA:

It never happens the same way twice. Sometimes I’ll listen to the radio on the way to a game to get some ideas, but most of the time I decide what I’ll play when I get to the arena. I try to approach the game as if it were a Broadway play and I am the orchestra scoring the action. Letting the mood of the game dictate what I play allows the music to always be timely, and it allows me to really accentuate what’s happening on the floor.

Any complaints about some of the selections?
I can honestly say that I’ve never had a complaint. My goal is to make the games feel traditional while sounding new. The organ itself is traditional, but always playing the most current songs is a complete contrast to what people are used to hearing at a basketball game! I enjoy pushing the envelope, and people tell me that my playing helps to make their game day experience fun and unique, which always makes me feel good.

Never had a complaint until now, thanks to Bruce Levenson, who seems to be on the Isle of Musical Discontent under a coconut palm by himself.

Foster’s YouTube channel is a healthy mix of him performing various covers from Alicia Keys to Michael Jackson to Lady Gaga and even Kings of Leon. And he’ll even take in-game requests from fans if you tweet him @Sir_Foster, asking only that you tweet him back when you hear your tune played.

It’s a terrible shame what’s happening to this team right now. The Hawks were one of the best surprises in 2013-14. And Sir Foster only enhanced that experience for fans of any race and age. I, for one, hope he is retained for a very long time by the Atlanta franchise. If this gem is a casualty of stupidity we will all be poorer for it.