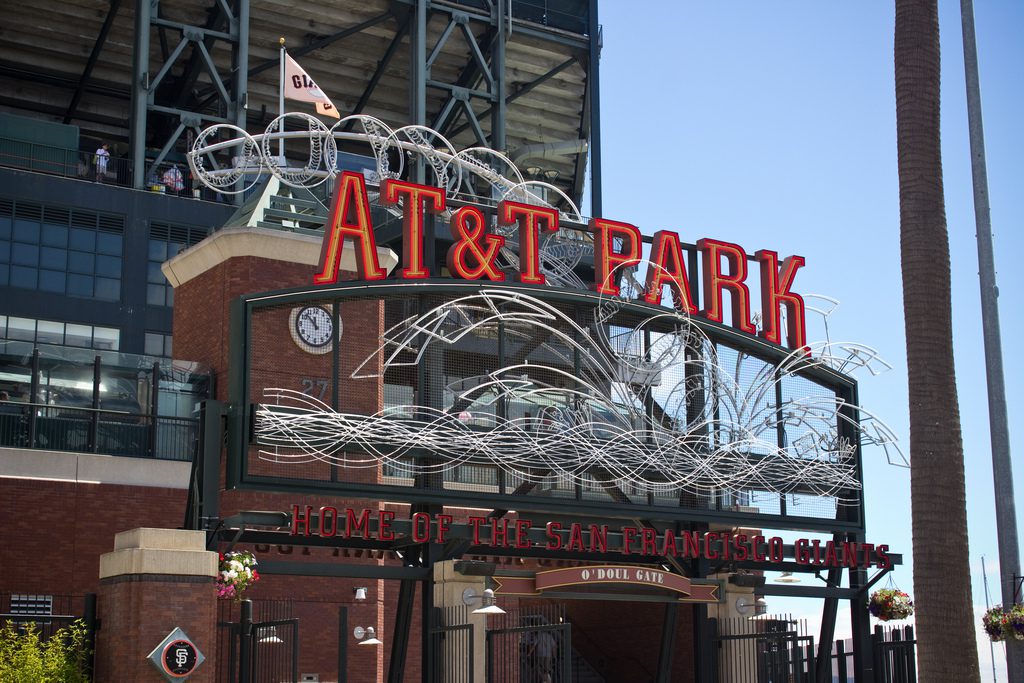 It’s hard not to fall in love with the San Francisco Giants after attending one game at AT&T Park.

You watch as the silvery fog rolls onto the drab base boards of a probing pier, its boards clearly needing a casual once over with a hammer as they creak with the patter of Giants fans’ feet as they stand on the outskirts of the park, patiently waiting for the Vallejo ferry to mosey over the now nighttime reflected onyx seawater in order to return folks to their vehicles after a testy Giants game during the regular season. Light banter dies as the welcoming Northern California nighttime nip brilliantly flows through the air, causing fans to pull their jackets closer to their bodies. That’s when it sounds inside the heart of the ballpark – the opening cords to Tony Bennett’s “I Left My Heart in San Francisco”. People stop and relish in the echo of the ballad, lost in its familiarity as seagulls circle their heads, illuminated in the shadows of the park’s overhead lights. The echo of Bennett’s voice appears almost haunting because the winning game they so recently attended is done, the fans on the pier take in a breath at the cords bouncing off the walls of their beloved park. They know the words by heart:

“When I come home to you, San Francisco…”

They know the lyrics all too well. It’s familiar, it’s powerful, it’s peaceful to the ears of die-hard fans. It’s also the last of the customary songs played by the Giants’ organization, the piece not-so-timidly following game time Journey familiarities “Don’t Stop Believing” (if the team is losing) or “Lights” (if they’re winning) during the middle of the eighth inning. Considering that they only play the ballad following a win, fans on the pier feel a sense of pure calmness while hearing those lyrics. It means they were home, surrounded by auspicious peers who wanted only one thing – to see their boys in orange and black advance.

Considering that passion that comes from fans and non fans alike, I have to ask just one question: What the absolute holy hell crawled up your ass, ESPN?

On Wednesday night during the National League Wild Card game between the Pittsburg Pirates, much like the visiting team, those same Giants fans received no such comfort at PNC Park. But hey, they’re actually used to it. They were surrounded by crestfallen Pirates fans who sullenly watched left handed pitcher Madison Bumgarner throw a shutout game in order to advance his Giants to the NLDS against the Washington Nationals. They watched shortstop Brandon Crawford hit his third career grand slam off of a one-two hanging curve thrown by Edinson Volquez in the fourth to push the visiting team ahead 4-0. They groaned helplessly as another Brandon (Belt) drove in two more insurance runs during the seventh and winced when third baseman Pablo Sandoval flipped over the Pittsburgh dugout railing in order to nab a popup foul ball off of Russell Martin’s bat.

But was ESPN impressed? Not at Crawford’s slam, no. And not at Panda’s phenomenal land-on-your-feet flip, no. Not even the ESPN Twitter feed was impressed, having failed to cover the NL wildcard game like they did the AL wildcard game. ESPN Commentators John Kruk and Dan Shulman sounded almost bored at times, while reporter Buster Olney was his usual Giants loving self. Okay, so it was a shut out game and nothing like the ass-clinching AL game, which was a damn nail biter.

I’m not too positive where the cool animosity against San Francisco came from. Did Tim Flannery run over John Kruk’s mother with his car? Did Tim Lincecum get Shulman’s kids high? Did both witness Buster Posey punt a herd of Chihuahua puppies into a wood chipper? Did Brandon Belt purposefully give away the ending of Breaking Bad to the entire staff? Whatever it is, ESPN appears to be comfortably nestled against the groin of whoever the Giants are up against. And come Friday, that groin will belong to the nettlesome Nationals, a team that the Giants have struggled with all season. Pitcher Jake Peavy will take the mound opposite Stephen Strasburg in the first of possibly five games. Games one and two will be played at Nationals Park before heading back to the city by the bay, where SF fans can ignore the torpid negative rants of outside commentators and bask in the roseate glow of their own sweet torment as that San Francisco fog rolls in.

“… your golden sun will shine for me.”

For the sake of Giants fans, let’s hope that last Bennett lyric holds up.