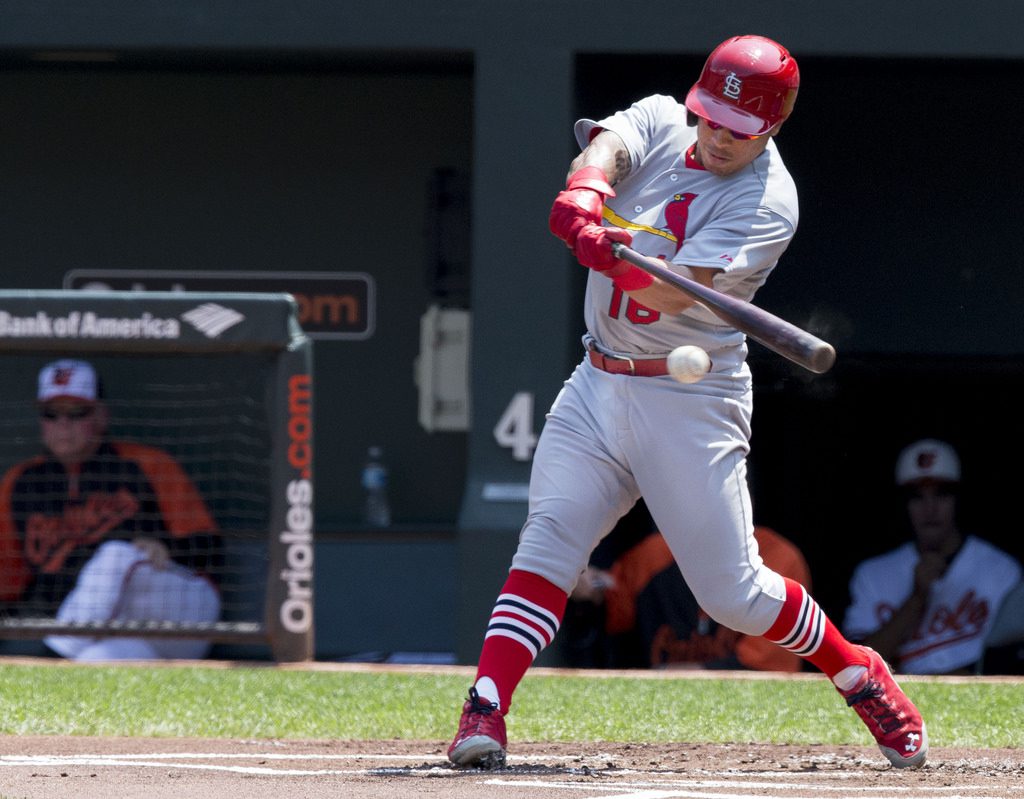 Did Lance Lynn or Jake Peavy pitch in this game? Given all the madness that occurred after they exited, it’s easy to forget who the St. Louis Cardinals and San Francisco Giants had as starting pitchers.

In a wild contest with no central narrative, a game that showcased rapidly swinging momentum shifts and lead changes, the Cardinals won 5-4 on a walk-off home run by Kolten Wong in the bottom of the ninth. His blast to right field was hit against Giants’ reliever Sergio Romo. It was the fourth solo shot of the night by the Cardinals, a team known for an extreme lack of power during the regular season.

There were enough quirks and oddities in this game for an entire series. Let’s start with the basic and expected type of plays though. St. Louis had a Matt Carpenter home run in the third inning that made it 1-0. Randal Grichuk‘s RBI single in the next frame tacked on an additional run. The Giants came back later on a Joaquin Arias RBI ground out in the fifth inning that plated Brandon Belt. They tied it 2-2 when Hunter Pence knocked in Pablo Sandoval on a base hit in the sixth. The damage both teams did at that point came against a below average Peavy and a relatively sharp Lynn.

In the bottom of that inning, St. Louis catcher Yadier Molina exited the game due to an injury. He grounded into a double play without being able to leave the batter’s box. An ominous silence emerged in the stadium as Molina was assisted off the field by the Cardinals’ training staff. After the soul and leader of St. Louis was forced to exit, the Giants took a 3-2 advantage on a run scoring knock by Gregor Blanco. Being down in the game and without Molina, it almost felt over for the Cardinals.

Oscar Taveras had something to say about that. Pinch hitting in the pitcher’s spot against Jean Machi during the seventh, the 22-year-old rookie blasted a hanging breaking ball into the right field seats. Fans exploded as the sadness from Molina’s injury was counteracted by the unexpected home run. This power surge continued in the eighth as Matt Adams destroyed a Hunter Strickland offering. After three straight sliders, Strickland inexplicably gave in with a fastball that Adams was likely waiting for throughout the whole at-bat.

In a shocking momentum shift, it now felt over for the Giants. They were down 4-3 heading into the ninth inning as the Adams blast had the feeling of a death blow. But as Cardinals’ fans know with certainty, nothing is safe when closer Trevor Rosenthal is on the mound. His performance was, in a word, ghastly. After surrendering singles to unlikely sources in Andrew Susac and Juan Perez, Rosenthal retired Blanco on a sharp lineout that nearly reached the outfield. After Jhonny Peralta made that catch at shortstop, madness reigned over Busch Stadium.

With two outs successfully recorded by the shaky closer, pinch runner Matt Duffy took his lead from second and Perez did the same from first. On a full count pitch to Joe Panik, what proceeded to happen next was truly unbelievable. Rosenthal uncorked a wild fastball that bounced well in front of home plate. It ricocheted away from Molina’s replacement Tony Cruz and sent the crowd into a collective sense of anxiety. Duffy was able to score from second due to excellent baserunning and Rosenthal’s late jump in covering home. On an insanely unlikely play, the Giants tied the game 4-4.

Rosenthal walked Buster Posey to load the bases after the game tying wild pitch. When he was pulled by manager Mike Matheny, the Cardinals’ closer, who could soon be the team’s former closer, heard a ripple of boos from the home fans. Seth Maness appeared in relief and retired Sandoval on a ground out. Sandoval’s missed opportunity proved to be critical as Wong ended the game only minutes later. On Romo’s second pitch of the night, Wong took him deep with a line drive homer.

Just like that, after the game appeared to be over in both team’s favor multiple times, Game 2 of the NLCS was officially over for good. Romo walked off the mound as Wong’s teammates prepared to mob him when his feet graced home plate. Next up in this suddenly exciting series is a Tuesday contest in San Francisco. The pitching probables are Tim Hudson for the Giants and John Lackey for the Cardinals.