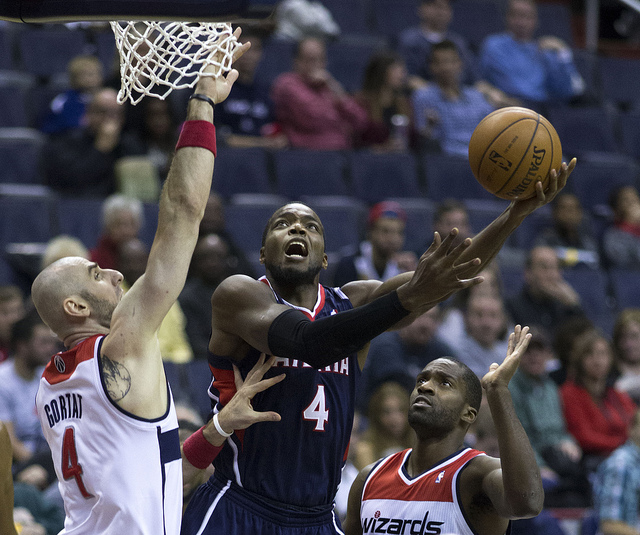 Sonny Giuliano: New Orleans Pelicans
This answer comes with the classic “If they stay healthy” caveat. Last season, the Pelicans could’ve been the answer to this question too, but they were bit hard and often by the injury bug. Anthony Davis, Jrue Holiday, Tyreke Evans, Ryan Anderson and Eric Gordon missed a combined 151 games last season and never had a chance to gel. Hopefully things will be different during the 2014-15 campaign. Add Omer Asik to the mix, who will likely be less pouty than last year, and the Pelicans have a playoff caliber top six… if they can stay healthy.

Corey Quincy: Milwaukee Bucks
The Bucks are not a playoff team. You already know this by now. The worst team in 2013-14 has Greek phenomenon Giannis Antetokounmpo, who continues to improve, and bright rookie Jabari Parker. This should be a much better year for a struggling franchise. How much better can they get? Well, maybe we’ll see something anywhere between 27-30 wins. It’s still better than last year, and probably more than you’re expecting after their previous display.

Steven Covella: Atlanta Hawks
Despite making the playoffs with a losing record, the Atlanta Hawks showed some fire last season. They put an admittedly off-kilter Indiana Pacers team on the ropes with strong point guard play from Jeff Teague, dominant showings from Paul Millsap, and some deadly three-point shooting from everyone else. If that was all the Hawks had to build on coming into this season, it would be plenty, but they did it without their best player, who’s coming back this season. Al Horford is one of the best all-around centers in the league, and one of the NBA’s most underrated players. He’s coming back from an injury, but if he’s right, Atlanta could nab as high as a three-seed in the Eastern Conference.

Aaron Lanton: Los Angeles Lakers
Surprisingly good for the Los Angeles Lakers would mean having a puncher’s chance of making the playoffs. That’s laughable to many fans, but here’s the reality: The Lakers won 27 games with Mike D’Antoni as the head coach (bad coach for last season’s roster), and despite Kobe Bryant missing 76 games. They have a better coach, more talent, and Kobe is back. That’s good for at least 10 more wins even if things go bad. If things go really well, the Lakers could win 20 more games which would put them at 47 wins, not good enough to make last season’s playoffs, but close. The Lakers won’t be a juggernaut, but they won’t be the embarrassment everyone is making them out to be.

Bryan Brandom: New Orleans Pelicans
This squad is young, but has talent everywhere. It’s frontcourt has it all: complementing defensive beastitude in Omer Asik and Anthony Davis, as well as the latter’s ability to score in varied ways, plus the quick-release marksmanship of Ryan Anderson off the bench. It’s also returning the highly-underrated Jrue Holiday at point guard and features talented if not ill-fitting wings. How Eric Gordon and Tyreke Evans coexist will be the difference between the Pelicans and a winning record. Barring an injury to Stephen Curry or one of LaMarcus Aldridge and Damian Lillard, they’ll be on the outside looking in come playoff time. But a winning record would be no small feat in a stacked West.