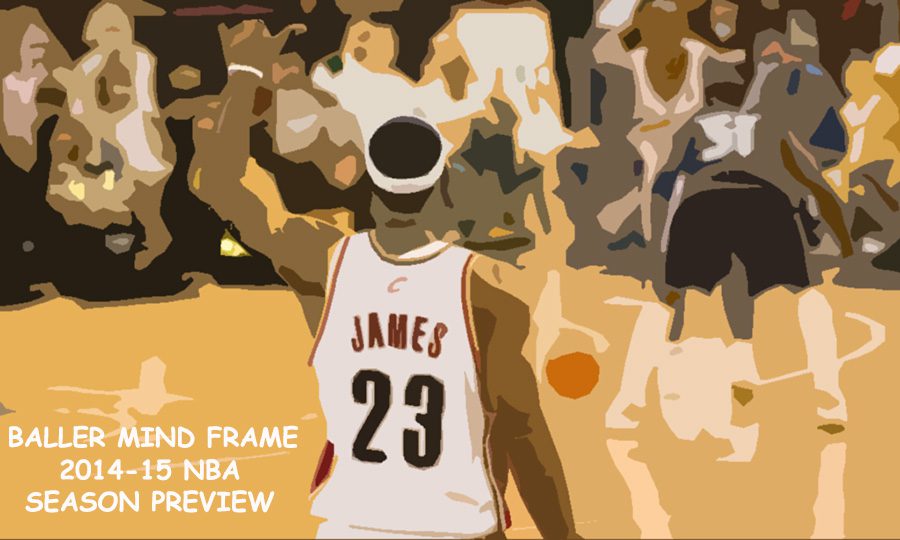 The 2014-14 NBA Season Preview from Baller Mind Frame is here! Read and be merry because we have you covered for all things you want and need to know about the upcoming NBA season!

EASTERN CONFERENCE
The NBA’s Eastern Conference saw a bit of internal shakeup as LeBron James went back home to Northeast Ohio, leaving the Miami Heat and rejoining the Cleveland Cavaliers. The addition of Kevin Love, combined with the talent of Kyrie Irving, makes for a tantalizing Big Three. However, the Chicago Bulls acquired Pau Gasol, making for a versatile PF/C combination with Joakim Noah! If Derrick Rose stays healthy, look out! What else is going down in the East? Check the below division previews and find out!

The champions reside in the West, so the question is, can the San Antonio Spurs actually win back-to-back NBA titles? The Western Conference is a punishing conference, and the Oklahoma City Thunder (when Kevin Durant gets back), Golden State Warriors, and of course the Los Angeles Clippers will make things very difficult for the Spurs to do what they’ve never done before, repeat as champions in consecutive seasons. Read more about the ultra-competitive West!

Everyone loves a good Top 10 list, right? Well, we’re here to fulfill your need as we look across the various positions, as well as who the top sixth men, rookies, contenders, and many more are for this coming NBA season.

Apologies for the long header, but basically, that’s what the below articles are about that hit on some touchstone topics, such as the possibility of the Boston Celtics trading Rajon Rondo, this being the final season for Durant and the Oklahoma City Thunder to live in harmony, how this could be a turning point for James Harden, and many more.

We were fortunate enough to participate in several NBA teams’ respective Media Days and get an inside look into the franchise before the season gets underway – their hopes, the changes within, and getting an overall feel of the dynamics surrounding the team.

Thank you for giving our NBA Season Preview a look! If you’re not at least a mediocre expert on the NBA after reading all of the above, well, we suggest you read things again… we can use the page views! Ha! Enjoy the upcoming season and, please, keep on coming back to Baller Mind Frame for opinions and analysis on the NBA, as well as the other major sports we all dig! Tell your friends and family about us!