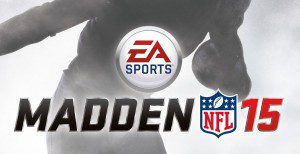 Every year EA Sports releases their latest version of Madden NFL, and every year it’s basically the same game. There are always a few tweaks, but really the basic gameplay hasn’t change much since Madden jumped over to the Xbox and PlayStation game consoles back in the 2000’s. That jump gave the game a lot more depth, and the wizards at EA have been trying to find the bottom of those depths for years now. It looks like they found a way to dig even deeper with the Madden NFL 2015 release.

This year the defense seemed to be the focus as the play calling on the defensive side has a lot more finite control. As someone who prefers the defensive side of the game (I used to play with a buddy where he would run the offense and I would run the defense as we played against others online) the defense now feels more impactful and less reactive. The new camera on defense that has the viewpoint toward the quarterback helps tremendously in this aspect. The change allows you to be a presence on the defensive side of the ball, instead of controlling the defense looking at things from the offensive vantage point. You now also get to control how you tackle a player. You can tackle low or high. You can wrap up or try to put a player on his backside. All of it makes the game more realistic (and a bit more difficult, but that’s half the fun). Those of you hoping to use this new camera when playing your buddies at home won’t get the chance to as it only works when playing alone, or multiplayer in an online environment. The offense still gets the preferential treatment when it comes to camera angles when playing local multiplayer.

One of the other fantastic adaptations in this year’s Madden is the concept of contextual play calling. EA has been struggling to find that balance between having you fumble through immense playbooks and spoon-feeding you a very limited selection of plays. Now the system provides a limited number of plays that are suited for the down, distance and location on the field. You can amend the plays if you have strategies in mind, and with all that together this might be the system that sticks for several generations of Madden.

Connected Franchises and Ultimate Team are still a part of this Madden, and the game tries to keep you engaged with friends and other gamers by making the interactions with others almost like a Fantasy Football environment. I personally always liked playing my own franchise and simulating the majority of games. I like pretending to be the Owner and General Manager and drafting and trading players. You can still do this, but EA isn’t putting a lot of resources in developing this part of the game.

The graphics are one area that EA doesn’t skimp on, and every year it gets harder and harder to tell if you’re watching a video game or the real thing. This year the uniform textures got a solid revamp, and look far better than they did in last year’s release. The environment lighting is more noticeable in the look and feel of the field and on the players. Natural day light compared to stadium

lighting is all tangible in Madden 15. Along with the lighting the stadiums themselves seem more realistic as well. This includes fans being more vocal for prime time games. The only down side is that the level of detail stops at the audio and the venue as the fans in the stands have had less work put into their rendering than I put into my manicure. The fans are lackluster and repeat far too often from section to section and stadium to stadium.

The 25th anniversary of Madden was last year, and to many fans of the franchise it seemed like a bit of a letdown. Madden 15 sought to correct this with a revitalized take on one of the most successful sports games in history. It’s clearly not perfect, but the team at EA Sports very clearly has that as their goal. The game is exciting to play for the seasoned Madden veteran and the rookie and shows that this is still a game worth purchasing. I’d add it to my Christmas list, if I didn’t already own in.