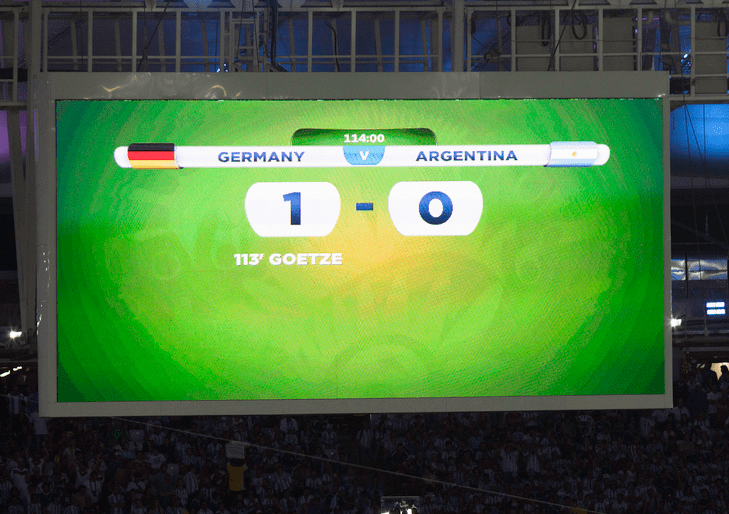 We’re approaching the end of a remarkable, unforgettable year in the soccer world. There were records broken, trophy droughts ended, and some shocking results in 2014. With a few weeks left, and plenty of matches left to play, here’s a look at the top 10 matches of 2014 (so far).

The 33rd edition of the Asian Football Confederation (AFC) final saw Australian club, Western Sydney Wanderers face-off against Saudi Arabian club, Al-Hilal. There was only one-goal in the two-legged final, scored by Tomi Juric, who had come on as a substitute . Al-Hilal were the more dominant side, but they couldn’t crack their opponent’s defense. The Wanderers put in a disciplined defensive performance, and they went on to win the tie on aggregate becoming the first Australian club to win the tournament. They also qualified for the FIFA Club World Cup, but have since been eliminated. It will still remain a memorable year for the club though, no doubt.

Argentinian club, San Lorenzo won the Copa Libertadores trophy for the first time in their history after they triumphed over Paraguayan team Nacional. The first-leg of the tie ended in a one-all draw, but San Lorenzo won the second-leg in front of their home fans. Interestingly enough, it was Paraguayan, Nestor Ortigoza who scored the winner. With this victory, San Lorenzo qualified for the FIFA Club World Cup and are scheduled to play Real Madrid of Spain in the final on December 20. The club have a chance to make 2014 even more memorable.

A fierce rivalry over the past decades, Madrid versus Barcelona rarely disappoints. However, Madrid fans will have been disappointed with the absence of Cristiano Ronaldo in the team line-up—the Portuguese star was unavailable through injury. Some Madrid fans may have been a little worried as well. Angel Di Maria put in a man-of-the-match performance, scoring the opening goal to give Madrid the lead. Barcelona eventually found their way back into the game, finding a goal through defender, Marc Bartra. With five minutes of regular time remaining in the match, Welsh superstar Gareth Bale collected the ball in his own half before making a 50-yard dart towards the Barcelona goal, finishing coolly past Jose Manual Pinto in goal to send the fans, staff, and players in eruption. After the goal, folks were comparing Bale’s speed (who ran 50-yards in 7.2 seconds) to Olympic runner Usain Bolt’s.

Gameweek 36 of a long, competitive Barclays Premier League season saw Liverpool enter the match top of the table, three points clear of Manchester City in second, and five clear of their opponents Chelsea who were third. Liverpool enjoyed most of the possession, but Chelsea defended well, and were showing glimpses of their threat on the counter-attack in the early stages of the match. But it wasn’t until the stroke of half-time where Liverpool captain Steven Gerrard slipped in an attempt to collect a pass. Chelsea striker Demba Ba was lurking and took full advantage of the slip, moving the ball forward and slotting past Simon Mignolet in net. Liverpool pushed men forward, searching for the equalizer, but Chelsea took advantage of their high-pressing and scored a second. The defeat ended Liverpool’s 16-game unbeaten run, where they had won 11 in-a-row during that streak. They went on to finish second in the league, conceding the title to Man City.

Bayern Munich have been the dominant force in European soccer over the past few years. They have appeared in three Champions League finals over the past five years, lifting the trophy once. Many thought that the two-legged semi-final would be really close, but Madrid were completely dominant in the second-leg, thumping Munich in their own backyard. Madrid were already three goals up at half-time through Sergio Ramos’ double and Cristiano Ronaldo’s strike. After the break, Ronaldo scored his second of the night to seal a five-goal aggregate win and send Madrid to the final. He also become the first player in Champions League history to score 16 goals in a single campaign. Memorable, indeed.

The stage was set for a re-match of the 2010 final, Spain entered the tournament as defending champions. The Spanish were still considered a threat despite their FIFA Confederations Cup Final loss to Brazil the previous summer. Spain took the lead from the penalty spot, but Robin van Persie scored the equalizer one minute before half-time with a stunning header. After the restart, Netherlands ran riot scoring four more goals. Netherlands showed no mercy, and took their revenge. Spain were left deflated after this defeat, and they went on to lose their second game to Chile effectively dumping them out of the tournament at the group stages. The players and fans will always remember this match, as much as they will try to forget it.

It came at last. The moment every Arsenal supporter, and those involved with the club were waiting anxiously for. It had been nine years since Arsenal last won a trophy, lifting the same FA Cup back in 2005. However, it wasn’t to be a walk in the park, and Arsenal were down two goals before the 10th minute mark. Hull City were bouncing after their early goals, but when Santi Cazorla scored a crucial free-kick after 17 minutes, Arsenal were right back in the game. They forced extra-time when defender Laurent Koscielny scored from close range. It wasn’t until the second-half of extra-time when Aaron Ramsey sent a low shot past Alan McGregor, in goal for Hull, that proved to be the winner. This was Arsenal’s 11th FA Cup title, equaling Manchester United’s record. Gunner’s fans will be hoping that the team can avoid another trophy drought after a memorable 2014.

The tournament hadn’t seen two teams from Spain face-off since Real faced Valencia in 2000. Atletico came into the match having already won the domestic league title. They were champions of Spain, and had a chance to become champions of Europe as well. Real, meanwhile, were searching for a victory that would see them win their 10th European title—the only club to reach this feat. Atletico scored first, and thought they had done enough to beat their rivals, but it wasn’t to be as Sergio Ramos scored the equalizer deep into stoppage time. Real went on to score three goals in the second-half of extra-time, routing their rivals. Cristiano Ronaldo, who scored the fourth from the penalty spot, finished the campaign with 17 goals, breaking the record he had set in the semi-final. Real Madrid were crowned champions, as they finally claimed “La Décima”.

The Germans entered the final after dumping out the host nation, Brazil. The last time Argentina faced Germany was during the quarter-finals of the 2006 World Cup—the game was won by Germany on penalties. This final was in Brazil, and Argentina had a chance to attain ultimate glory by lifting the trophy in Brazil’s iconic stadium. Argentina scored first, but their goal was disallowed for offside. Striker Gonzalo Higuain ran off in jubilation, but had to cut his celebrations short after he saw the linesman’s flag. Lionel Messi had the opportunity to end all arguments about the current best player in the world once and for all, but he couldn’t lead his team to victory. The Germans triumphed in extra-time when Andre Schürle’s cross into the box was met by substitute Mario Gӧtze, who scored with a volley. Germany went on to lift their fourth World Cup, and became the first European team to win the tournament in South America.

Brazil were within touching distance of the final. They had the opportunity to lift the World Cup trophy in their home nation. They had reached the final in 1950 the last time they were hosts, only to lose to Uruguay. Victory over Germany would have possibly put them up against rivals Argentina who were in the second semi-final. How sweet would lifting the trophy be then? Players and fans may have been dreaming of this, but the Germans came to wake them up. The Germans were five goals up before the half-hour mark. Brazil were left stunned. Fans were confused, some broken. When the teams came-out for the second-half, Brazil showed some life, and came close to scoring. But the Germans were ruthless, and added two more goals before Brazil finally got on the score sheet in the last minute. For a moment after the final whistle, it seemed that the soccer world had stood still. The famous Samba Boys were beaten, and left dusting off their boots, while the mighty Germans were clanking mugs, giving cheers to a dominant reign that has been overdue.