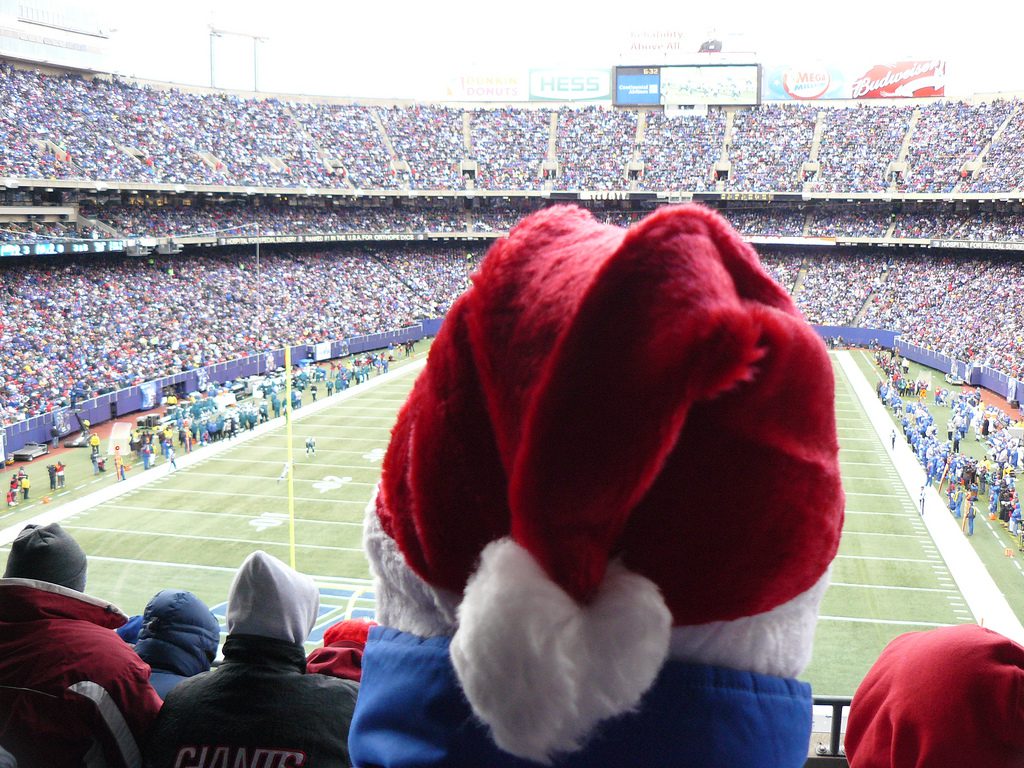 I’m making my list, and checking it twice. Some NFL teams are safe bets and others a roll the dice.

San Francisco 49ers – Please bring us a new head coach and a quarterback. Maybe one that doesn’t make bad decisions and have more tattoos than our coach has kaki’s (and our current coach has a $#!+-ton of kaki’s).

Chicago Bears – A defensive tackle, defensive end, a linebacker…actually, could we just get a whole new defense? We’ll give you our first-string quarterback. You can take the guy on the bench making 14 million a year too if you want.

Cincinnati Bengals – Is it too much trouble to get a division title? I mean, I know your elves would have a hard time constructing that in the workshop, but it would be really nice. Maybe a machine that turns ties into wins?

Buffalo Bills – A time machine. We want to go back to the start of the season and let Kyle Orton play every game as our starting QB. That, or some kind of magical dust that makes everyone forget that we haven’t been in the playoffs for the better part of 20 years.

Denver Broncos – Could we get Peyton Manning and Demarcus Ware from seven years ago? Otherwise we’re good.

Cleveland Browns – Could we have Peyton Manning from seven years ago? If you’re already giving that to someone we would be happy with Peyton Manning now.

Tampa Bay Buccaneers – It’s been a rough year for us. The list is too long for us to start naming positions and things of need. Maybe just bring back those creamsicle uniforms. That way people will focus on how bad the uniform is and not the team.

Arizona Cardinals – Some kind of quarterback protector? We’re on our third one this year already, and we keep finding ways to break the other two. Even once they get healthy, we find a new way to break them, again.

San Diego Chargers – Just get us into the playoffs. We promise to be good, this totally counts as our present, and we’ll be soooo nice to everyone next year, promise.

Kansas City Chiefs – A wide receiver would be nice. We haven’t had one of those catch a touchdown since last year (seriously). Also, could we get a move to the AFC or NFC South?

Indianapolis Colts – Just keep all the other teams in our division as basement dwelling pushovers and we’re all good. OK, maybe a makeover for our quarterback, he’s looking a little Amish lately.

Dallas Cowboys – We got so much more than we expected this year. I suppose if we had to ask for something it would be reasonable contracts for Dez Bryant and DeMarco Murray, but we don’t want to push our luck.

Philadelphia Eagles – Could we please get a do over on the year? If not, maybe just that last game against the Cowboys?

Atlanta Falcons – Could we have like two more wins? I mean,  8–8 gets you in as a division leader this year. We’re trying not to ask for much, like say a whole new coaching staff, offensive line, defensive line and defensive secondary.

Jacksonville Jaguars – Who us? You remembered we exist! That is a present in and of itself.

New York Jets – We already know we’re getting a new head coach. He’ll probably want a shiny new Quarterback (all our other ones are a little beat up). Ummm, could we get away from the AFC East? Even if it was just for a season or two.

Detroit Lions – All we really want is a win next week.

Green Bay Packers – A good playoff run would be a real nice way to close out the year. Maybe some help on defense (we really need it).

Carolina Panthers – Could we please go back to September? We’ll be better, I mean better enough to win the division. Please, pretty please!

New England Patriots – Is there a way to freeze time? Tom Brady is getting up there and this could all fall apart without him. If we could keep him around forever we’d be set.

Oakland Raiders – Can we ask for the power to save us from ourselves? I’m not even sure what that means (as we are the Oakland Raiders), but in some way I feel like it applies here.

St. Louis Rams – Our quarterback keeps breaking, could we have a new one please? Maybe some wide receivers and a dependable running back? If that is all too much to ask, could we at least be relocated to the NFC South?

Washington Redskins – We’re not really picky. Whatever is overpriced and over-hyped, we’ll take buckets of that until we choke on it. That is so us!

New Orleans Saints – I know your body double is our defensive coordinator, so could we get a little something extra? A whole new defense and coordinator would be great. A little O-line help would go a long way too. A win next week is a must.

Seattle Seahawks – We’re in good shape. Perhaps do something for those less fortunate. Ummm, a nice cake for the 49ers would be lovely.

Tennessee Titans – Could we please get Jeff Fisher back?

Minnesota Vikings – Adrian Peterson, wide receivers that don’t remember meeting Jesus and our defense from five years ago. Oh, and a head coach that can do something. And a bicycle.