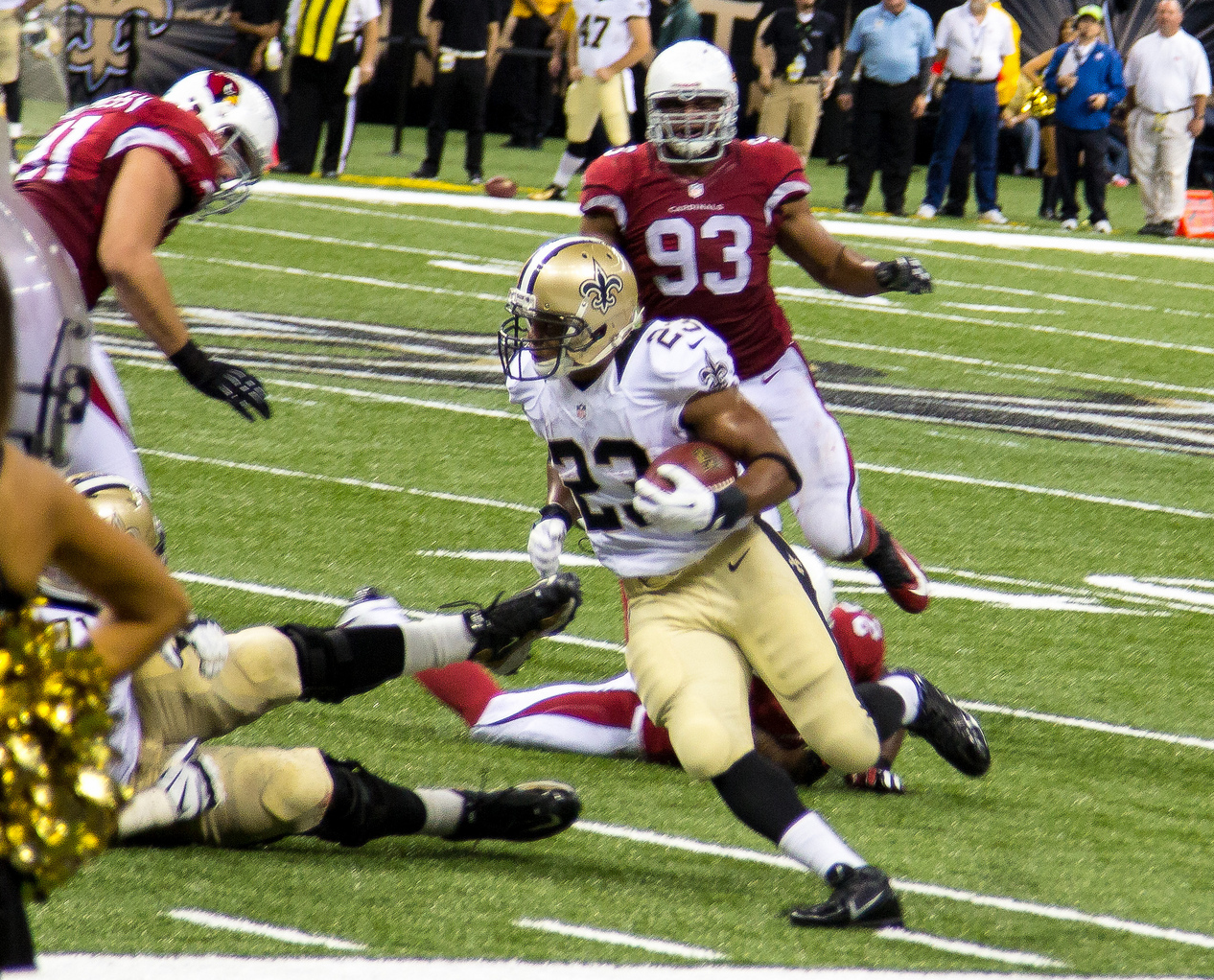 The Pro Bowl is over, and the NFL again succeeded and putting on a display of athleticism while making the game close and entertaining for the fans to watch. Turnovers, mistakes, spectacular plays, it all came together. It should be no surprise that rushing the football took a back seat to the high-powered passing attacks. The league has been steadily slanting the rulebook in favor of passing for the last few years. One rusher did manage to stand out a bit.

Running behind my pick as the better offensive line between Team Irvin and Team Carter, running back Mark Ingram achieved 72 hard-fought yards on 11 attempts. Compare that to the just 18 yards on a mere three carries for team captain DeMarco Murray. With 60 percent of the line being Dallas Cowboy players and the coach of Team Irvin being Jason Garrett, it’s hard to not think about Garrett trying out a potential new piece for the offense in Dallas.

Both Murray and Ingram are set to be free agents. It’s amazing to look at some of the parallels and disconnects with two running backs drafted in 2011. Ingram was a first-round pick by the New Orleans Saints. Ingram was the only back taken in the first round. There were no questions surrounding Ingram when he came out of college. He did everything well, had good size, speed, and quickness. Some small injuries were noted in his scouting profile, but everyone cast these aside as insignificant. Murray was selected in the early part of the third round. As the sixth back taken overall there wasn’t a lot of expectation for Murray in terms of production. Scouts saw him as a capable runner that lacked vision and football IQ. “Murray runs high, can’t get the tough yards and lacks the quickness to make the first man miss” were all common descriptions of the leagues top runner.

As different as their draft notes were their team situations were even more uneven. The Saints had just come off of a crushing loss in the playoffs, and realized they needed more balance to help the team advance. Ingram was the solution to this, and was brought in to be the starter from day one. Dallas was coming off a mediocre season and really just needed someone to help an aging Felix Jones in the backfield. Murray was drafted for need more than want. Both backs suffered injuries in their rookie seasons, neither starting more than seven games. Dallas finished 2011 a disappointing 8–8 whereas the Saints finished 13–3 and were ousted again in the playoffs.

The next few years look very much the same. Both players missed time virtually every year due to injuries. While none of these injuries were such that it forced their teams to consider an all-out replacement, but the sheer volume of injuries had both managements concerned about the long-term commitments to their players. Both clubs (Dallas or New Orleans) could have offered either player a contract in the neighbourhood of $1.5 million for the next three or four years at the end of last season, and either player likely would have taken it without a second thought. It’s amazing what difference a year makes.

Ingram did not make it through the 2014 season without missing a little time, but did manage nine touchdowns and nearly 1000 yards. The Saints woeful season record was not the result of a lack of skill or will at the running back position. Murray, well we all know what Murray did. The verdict on what Ingram will make is unclear. I can’t see him getting more than a two-year deal in the area of $2 million a season. Murray is set to cash in somewhere north of four million a year (the current offer on the table from the Dallas Cowboys). Back to the Pro Bowl, did Dallas find their replacement in Ingram?

Certainly I think Jerry Jones has enough ammunition if he decides that Ingram is the back he wants. Really, any free-agent running back will want to come to Dallas if the price is right. The idea of running behind the best offensive line in football, compounded with a passing attack that is supportive makes Dallas the ideal spot for most guys looking to post solid numbers and get their touches. Dallas will want someone that can both catch and run, but also someone with good ball security as Murray did lead the league in fumbles by a running back.

The other option here is Dallas uses a draft pick or two. With the way other teams are devaluing the running back position the first overall back may not go until the second round this year. Either way, expect Dallas to use at least one pick on a running back with a long-term goal in mind. If they do manage to sign Ingram, look for them to draft a player to be used as a change of pace. I’d be thinking of a smaller speedster that may also return kick-offs and punts. If they don’t sign a veteran then it will be a bruiser back, the sort of player that you’re expecting to run over people, rather than around them. Ingram might be a great fit for the Cowboys, but injury concerns will limit his value on the open market. As for Murray he’ll get to watch what someone else does with his offensive line. He’s hoping that the team that picks him up has some green in the uniform so the envy doesn’t clash.