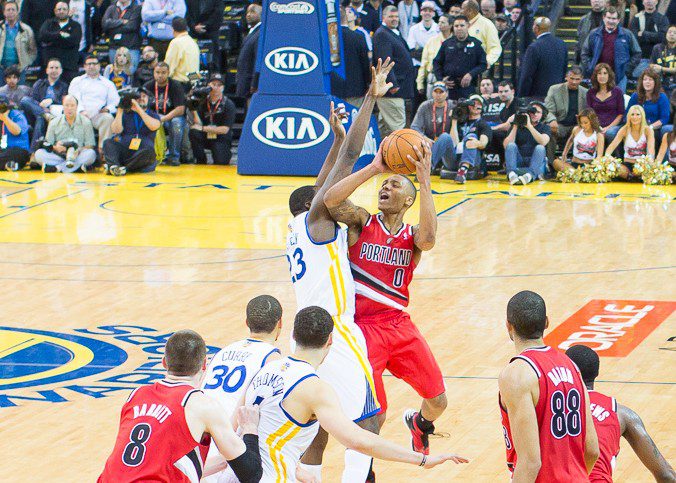 Believe it or not, the end of the NBA’s regular season is just two months away. After the annual, and now extended, NBA All-Star break, the stretch run of the season begins. All 30 teams will be jockeying for some sort of position, whether it be for a favorable spot in the standings or for a more favorable draw in the draft lottery, and there will certainly be a number of players who are making late-season pushes for awards, honors or in some cases just a consistent spot in the rotation. So without further ado, here are five players who could be ready to break out after the All-Star festivities.

Lillard was passed over by the coaches and once by Adam Silver for a Western Conference All-Star spot, so I’d warn you not to be naïve and think that his notorious Eff-You edge will be a thing of the past just because he now has a spot thanks to a Blake Griffin staph infection. Lillard has a chip on his shoulder the size of Kanye West’s ego and he typically doesn’t need any provocation, so being twice passed over for an All-Star reserve spot should be more than enough ammunition for him to unleash a fair share of cold-blooded performances over the rest of the season.

Two weeks before the start of the regular season Lillard had 80/1 odds to win the MVP Award, and even though he probably wouldn’t be considered a favorite right now, a particularly vengeful final two months of the season aren’t out of the question, and that would put the third year point guard right into the thick of the conversation.

The Brow currently boasts a PER of 31.7, a figure that would rank somewhere around the third best in NBA history if it were to hold up for the rest of the season. That’s really all the justification needed for Davis to be mentioned on this list, but on top of that the Pelicans are right in the thick of the race for a playoff spot in the bloodbath that is the Western Conference, and Davis’ play is obviously the biggest determining factor in whether the Pelicans are playing in late April or hoping for some lottery luck in mid-May.

It’s worrisome that Davis is so frequently nicked up by minor injuries (most recently a shoulder sprain that came as a result of a nasty fall after an alley-oop dunk), but when healthy The Brow is just as impactful as any other player in the league. As long as the Pelicans are within arms reach of that eight seed, Davis is must-watch basketball and a serious MVP candidate.

Maybe I’m bending the rules by including a four-time MVP in a breakout players discussion, but LeBron hasn’t looked like peak LeBron for the majority of the first half so that leaves room for a break out of some sort. With a rejuvenated roster and a golden opportunity to move up in the standings in the Eastern Conference, the twelve year vet might be poised for a big second half that leaves those who wondered whether he was past his prime feeling foolish.

My first three picks have been predictable, so let’s take a shot with Lance Stephenson for number four. He might be traded. He might only get 20 minutes per game. Or maybe he finally finds a role with the Hornets. Who knows? Kemba Walker is out for the next month or so and at some point it seems like the Hornets offense is going to need some sort of off-the-dribble creativity. Even though he’s been abysmal this season–and that might be an understatement–Stephenson is Charlotte’s best option to fill Walker’s void for the stretch run.

The offense will continue to run through Al Jefferson, as it should, but Stephenson’s role should be expanded, and thus, a breakout of some sort will result. Even though Lance is a wild card and an abrasive personality, he brings too much to the table not to find a spot on a team fighting for one of the last playoff spots in the East.

If the Atlanta Hawks starting five can win Eastern Conference Player of the Month, then I can include the entire San Antonio Spurs team in a breakout players section. Go ahead, fight me on it. The Spurs remind me of Michael Myers. Just when you thought Mike was dead, he’d pop up out of nowhere, walk slowly behind you as you sprint in the opposite direction. Somehow he just kept getting closer and closer until he mercilessly stabbed you to death. In NBA terms, it goes something like this: just when you think the Spurs are too old and too banged up to remain a title favorite, they rip off eighteen wins in a twenty-game stretch and find themselves at the top of the Western Conference standings.

It’s almost a foregone conclusion. The Spurs are coming, and the rest of the teams in the West can run as fast as they can. Ultimately it won’t matter. San Antonio will catch up.