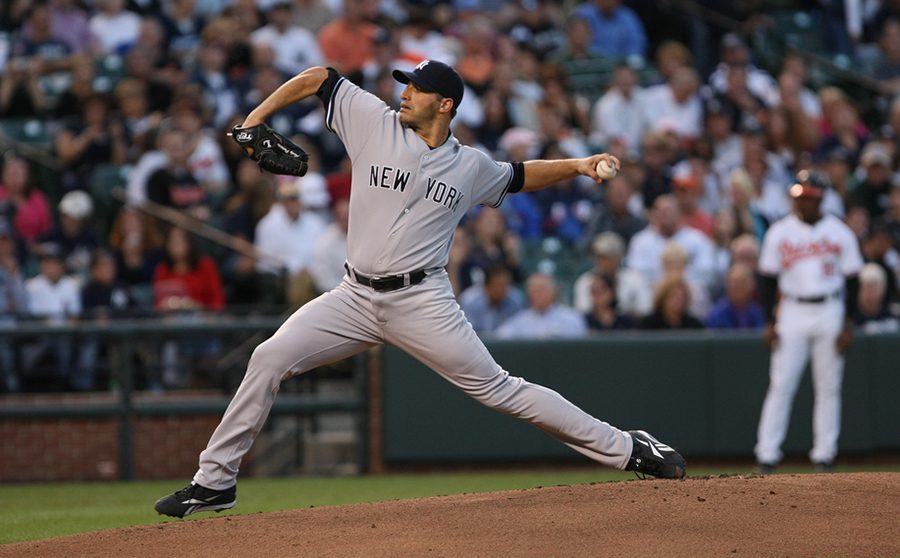 The New York Yankees are baseball’s manifestation of William Blake’s concept of Hell: specifically that Hell is not a source of punishment, but rather the manifestation of unsuppressed desire. The Yankees continuously defy the heavenly construct of austerity in order to engage in celebrations of excess that would make Dionysus’ cheeks shamefully turn crimson.

Consider the Yankees’ plan to retire Andy Pettitte’s number. What exactly has Pettitte done to earn the honor? He’s not a Hall of Famer, and his record of postseason wins exists entirely because of baseball’s expanded playoff format. Pettitte also is the first of baseball’s “PED class” to have his number formally retired. Pettitte pitched in the heart of baseball darkness for 15 years, amassing 219 wins and three All-Star appearances. He never won a Cy Young Award, and the totality of his individual honors include leading the American League in wins during the 1996 season and winning the 2001 ALCS MVP award. Pettitte’s achievements, according to baseballreference.com, compare similarly to just one Hall of Famer, Carl Hubbell. Pettitte’s closest statistical references include Mike Mussina, David Wells, Orel Hershiser, and Jack Morris. Morris and Mussina are the only players on the Hall of Fame periphery and the others have been dismissed as legitimate candidates. Pettitte is one of the game’s “very good,” not great.

There is no evidence the Yankees’ postseason wins exist because of Pettitte’s intercession. Then again, Pettitte truly overwhelmed postseason opponents with his dental-floss thin ERA of 3.81; his astronomical winning percentage of .633 struck fear into the hearts of postseason opponents throughout the land; the complete absence of postseason shutouts fails to capture how dominantly Pettitte controlled all 19 of his postseason wins. But Pettitte is a winner! He was an integral (?) part of five World Series championship teams and eight pennant winners.

Yankee fans, as they are wont to do, will argue that Pettitte is a “true Yankee” because he won five World Series titles, but will conveniently forget his sojourn to the Houston Astros along with his “misremembering” of his conversations with best friend/pitching guru/PED pal Roger Clemens. Honoring Pettitte is disgraceful, especially when the Yankees not-so-privately explore the idea of voiding contracts such as Alex Rodriguez’s and Jason Giambi’s on the basis of their PED use and admissions. Honoring Pettitte is the Yankee way: winning uber-alles. It stands to reason Giambi and A-Rod will never have Monument Park plaques and retired numbers because they didn’t win enough. Pettitte has five rings, but A-Rod’s tainted achievements rub elbows with guys named Babe Ruth, Willie Mays, and Hank Aaron. A-Rod writes cursive apology letters, and the Yankees celebrate Andy Pettitte Day this coming August!

The retiring of Pettitte’s number vindicates the pitcher’s cheating. Chuck Knoblauch’s tweet about the retiring of misremembered testimony seems that much more appropriate. The only difference between Pettitte and A-Rod is four World Championships – the Yankee brass that honors Pettitte is the same group of nefarious bridge-dwellers seeking to break their contract with the guy who owns a portrait of himself as a centaur. The Yankees shameless excessive parody of their history extends beyond a cheating pitcher that has a coincidental run of success to a centerfielder notable for his exploits on the jazz guitar.

Bernie Williams is also slated to be honored at Yankee Stadium this summer. Pettitte owns inflated postseason records, but Williams’ accomplishments make Pettitte the second coming of Randy Johnson. Williams is a five-time All-Star and appeared in the top ten of the MVP voting once. Baseball Reference’s similarity score places him amongst a group headed by Paul O’Neill – assuredly no Hall of Famer. An interesting comparison is former Red Sox “great” Reggie Smith. Though Smith spent half of his career with the Red Sox, he is a seven-time All-Star and twice was in the top five in the MVP voting. Suffice it to say, there are no ceremonies planned to honor Reggie Smith, then again Smith did not have the musical career of Williams. Williams has worked with Paul McCartney and Paul Simon, he’s sold tons of albums, and was nominated for a Latin Grammy. In Yankeeland, having a career similar to that of Reggie Smith means that your number gets retired. After all, four World Series wins, five All-Star selections, and one top ten MVP year with the Yankees is better legacy than the career of Magglio Ordonez (a player that compares favorably to Williams). Pettitte and Williams are symbols of Yankee excess while Jorge Posada is more of an interesting, complex case.

Pettitte and Williams may lose value because of their positions, but Posada’s career compares to that of Gary Carter, Bill Dickey, and Joe Gordon – three Hall of Fame catchers. Posada earned two top ten MVP votes along with five All-Star selections. He also compares to Benito Santiago and Javy Lopez – two decidedly non-Hall of Fame catchers. The Yankees retired Dickey’s number, but never retired Gordon’s number. Gordon and Carter were recently elevated to the Hall of Fame, Dickey achieved the honor in 1954. A case can be made for either the retirement or reissuing of Posada’s number. The Yankees, in their Steinbrenner-ian edict of championships being the only accomplishment of any worth, value Posada not because of the consistency he brought to a demanding position, but rather because he was part of four championship teams. Posada’s .248 batting average and 11 postseason home runs are the stuff legends are made of and how championships are won. That there’s even talk of retiring the numbers of Posada, Pettitte and Williams is proof the Yankees understand William Blake far better than literary scholars.

The Yankees have retired, including the three for this summer, 21 numbers. They’ve retired the number 8 twice! Of the 21 numbers that are retired, only eleven are Hall of Famers, with Mariano Rivera definitely being number twelve, and whenever Derek Jeter’s number is retired, number thirteen. Billy Martin’s number is retired, and Martin’s contributions to the Yankee franchise include setting records for how many times a manager could be fired by an owner, as well as alcohol consumption. Martin’s death occurred three years after his number was retired, and all accounts of Martin’s life do little to portray Martin with any adjective that has a more positive connotation than “colorful.” Roger Maris is another Yankee with a retired number. Maris is one of baseball’s tragic figures – his pursuit of the single season home run record was a joyless endeavor and that he’s been usurped by the cheaters Mark McGwire, Sammy Sosa, and Barry Bonds is an affront to his integrity. The least the Yankees could do is retire his number – they allowed the media to accelerate the recession of Maris’ hairline, and ultimately dispatched Maris with little care after he ceased being a draw with Mickey Mantle. Phil Rizzuto is a Hall of Famer, but really? Rizzuto is a Hall of Famer in the way that the last kid is picked for the pick-up baseball game is a baseball player because it’s just wrong to see him openly pining for something he’s really not qualified to do, so you pick him, hold your nose and hope he doesn’t make you regret it. Rizzuto is not qualified to be a Hall of Famer – his stats make Mario Mendoza look fearsome – but the Yankees retired his number! There are retired numbers for Don Mattingly (overrated except in facial hair matters), Elston Howard (in fairness, Howard’s contributions to the Yankees’ championship teams were significant, but he’s not a Hall of Famer), and Ron Guidry (Louisiana Lightning’s nickname was the only notable part of his career). The Yankees also retired Thurman Munson’s number – which makes sense, Munson was a fabulous player that lost his life way too soon, except the Yankees didn’t retire Cory Lidle’s number and he also lost his life in a plane crash. Clearly the Yankees’ number retirement policy is whimsical. Further illustrating the whimsical nature of this policy is that fourteen of the retired numbers occur under the Steinbrenner error… I mean era.

The Yankees hide behind words like “aura” and “mystique” – the words Curt Schilling also noted are names of nightclub performers – to burnish their legacy. Yet Yankees hypocrisy knows no bounds. A team so deeply invested in their legacy to the point avaricious self-promotion ran straight to New York City to extort tax money for the building of their new stadium when the original Yankee Stadium lacked structural deficiencies that necessitate a new stadium. A government handout makes abandoning “aura” and “mystique” that much easier. This hypocrisy isn’t new – when Steinbrenner bought the Yankees the first order of business was to renovate Yankee Stadium! History has a price.

Andy Pettitte Day, Jorge Posada Day, and Bernie Williams Day should be seen as what they are – shameless cash grabs. The Yankees’ attendance is sagging so the team reverts to their most valued asset to raise money – their history. If the Boston Red Sox or Los Angeles Dodgers did the same type of shameless self-promotion, the first group of fans to decry the move as classless would be Yankee fans. Yet these fans are so myopic they’ll gladly fork over hard-earned money to sit at a sterile, tradition-less edifice while simultaneously attempting to conjure up excitement from twenty years ago. The Yankees upcoming season and next few seasons look so glaringly bereft of “championship uber alles” credibility that I’ve compiled a list of personnel who should have their numbers retired (besides, of course, Derek Jeter Day which will probably be a month-long orgy of New Yorkers who can’t get out of each other’s way to praise “The Captain”):

David Wells Day: Boomer did pitch a perfect game, and for a long time he was the only fun thing about the Yankees. He also never cheated unlike that dirty cheater Pettitte.

Scott Brosius Day: Brosius was the hero of the 1998 World Series, and since he was the big hero of that World Series, and as everyone who knows everything will attest, the 1998 Yankees would beat any team ever, including a team handpicked by God, Brosius’s time in the sun is long overdue.

Byung-hyun Kim Day: He is the reason behind Jeter’s Mr. November moniker.

Ken Phelps Day: The Yankees traded Jay Buhner for him, and as Seinfeld taught us George Steinbrenner has an excellent sense of personnel, look no further than hiring George Costanza as Assistant to the Traveling Secretary.

Aaron Boone Day: He did ruin the winter of 2003 for Red Sox fans. That is major points in the Bronx.

George Costanza Day: His imprints on the organization should not be understated – cotton uniforms, his work on Danny Tartabull’s swing, and the Kung Pao – George likes his chicken spicy.

Alex Rodriguez Day: 600+ homeruns, a World Series title in 2009, along with winning an MVP during his time in Gotham, A-Rod’s number 13 should rest right next to Pettitte.

William Blake’s most enduring maxim from his book, The Marriage of Heaven and Hell is “the road of excess leads to the palace of wisdom.” The Yankees have spent the better part of a century attempting to separate themselves from the rest of baseball due to their achievements (perhaps the best example of this separation is the advertisement they ran after the 2000 World Series win showing their 26 World Titles with the tagline “We’ll try to do better next century”) and they’ve succeeded – they’re a parody of their own success.