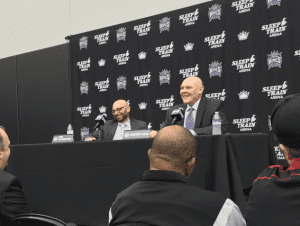 George Karl’s debut as head coach of the Sacramento Kings brought immediate improvements to what had been a team in decline, as he orchestrated a 109-101 win over the Boston Celtics.

The first few minutes of the game featured a broken Sacramento offense in which DeMarcus Cousins was shut down and all shots were contested. Boston locked down the Kings in this first portion, altering shots from inside the paint on every trip to go up 16-2.

Turnovers were an early problem for the Kings, as there were miscommunications on simple passes which should have been made easily. They committed 24 turnovers on the night compared to Boston’s 11.

“We gave them free-throws and we gave them points off of turnovers. If we had been 30 percent better in both of them, it would have been a pretty easy game for us,” said Karl.

After taking a timeout, the Kings managed to make a run to close out the first quarter, taking the lead 28-27. Omri Casspi and Derrick Williams were main contributors, breaking into transition on every opportunity, which is a mainstay in George Karl basketball.

“The bench came in and saved us. They were great,” said Karl. “They passed the ball and moved the ball very well. Andre [Miller] gave us an assistant coach on the court.”

Sacramento delivered the ball to Cousins on the block on most possessions after the first quarter. Boston managed to force nine turnovers from him by sending double teams from Marcus Smart and wing defenders, but Cousins still managed his usual scoring load. He had 31 points on just 18 attempts from the field, and gathered 15 rebounds. He also had two steals and a blocked shot.

Rudy Gay also contributed a good offensive game which carried into the fourth quarter, as he improved upon his shot selection which had been poor in the first quarter. He shot an efficient 9-for-18 from the field to finish with 28 points. He also had five rebounds, four assists, and a steal.

Gay’s presence at the free-throw line was integral to the win, as he stepped up and made all eight of his attempts.

The Celtics mounted a comeback in the fourth quarter, as Marcus Smart hit a three-pointer to reduce the lead to six with just over a minute left. Sacramento’s defense softened up slightly in the final period, but it was not enough to give up a win.

“We got tired. Everybody on the court, at times, looked like they could’ve used an extra timeout,” said Karl. “But we made some three’s tonight, and we made our free-throws when it counted.