When the Toronto Maple Leafs began the 2014-2015 season hopes were as high as ever in “The Six”. The 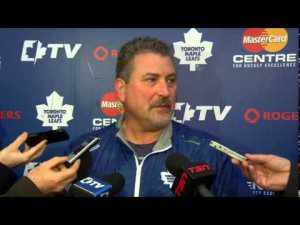 team barely missed the playoffs the year prior, and injuries had played a part. With a new year and a clean slate, the team was expected to at least sneak into the postseason, and that would have been enough for fans of the most lucrative hockey team in the world. Expectations were shattered at the beginning of the season when the Leafs were scoring the most goals per game in the league, and were in contention for the top spot in the division. The fan base became a-buzz with excitement for a team that perhaps had turned a corner and made a tremendous leap to the next level of excellence.

Sadly, the illusions of grandeur fizzled into nothingness, and the team began to slide downhill faster than the Jamaican Bobsled Team. It was about this time that recently extended head coach Randy Carlyle was given the boot, making way for newly signed assistant Peter Horachek. A strong performance coming out of the All-Star break would have allowed the Leafs to maintain a low playoff spot and obtain the expectations set forth by fans at the beginning of the season. Alas, this is not the way events transpired.

Since Horachek has taken over the team, the Leafs have the worst record in the NHL, including the most recent loss to the New York Islanders. The Leafs are now the fourth worst team in the league, and have almost a one in ten shot at the top overall pick in the draft lottery this year. And for this I say, “Thank you, Peter Horachek.” I say that thank you with all the honesty and sincerity I can muster. I am a Toronto Maple Leaf fan, born and raised in “The Six,” and will continue to blindly support the Leafs until the day I die. Blind support does not mean blind agreement or irrational thought process.

The Leafs (under proper management and guidance) should have made the playoffs this year. However, even given Dali Llama type guidance and Donald Trump type management, this team does not win the Stanley Cup this year. Given the current roster, the team would be unable to win four of seven games against teams like Montreal, Boston, Los Angeles or Chicago. The best the Leafs can do is make it to the division finals, lose in six games, and end up with a very low round draft pick in a draft year fat with talent.

The losing streak and poor play have allowed the Leafs the luxury of intense self-scrutiny (as if the Toronto Media doesn’t do that enough for them) and the wisdom to fix some of their past mistakes. Trading away David Clarkson, and his insane contract, wasn’t a good move. It was a miracle! Trading away various players that were entering free agency and the team knew they couldn’t or wouldn’t resign them is one of the smartest things a team can do.

With even a glimmer of a chance at the playoffs I’m not sure the Leafs make any of the trades they did. A glimmer of a chance and the Leafs are likely buyers, rather than sellers, mortgaging their future yet again.  A glimmer of a chance and the cap space that the Leafs now have is likely still tied up in dead weight like David Clarkson. Peter Horachek made this possible. In a weird way this hiring is like asking Inspector Jacque Clouseau to guard and hold your Faberge egg collection worth $1 billion dollars (that is insured for $2 billion). You’ve lost the collection at the end of the evening, and it’s in pieces, but you’re net worth has increased as a result. The Leafs head into next season in a much better place than they did the year before by being MUCH worse. We have Peter Horachek to thank for that.