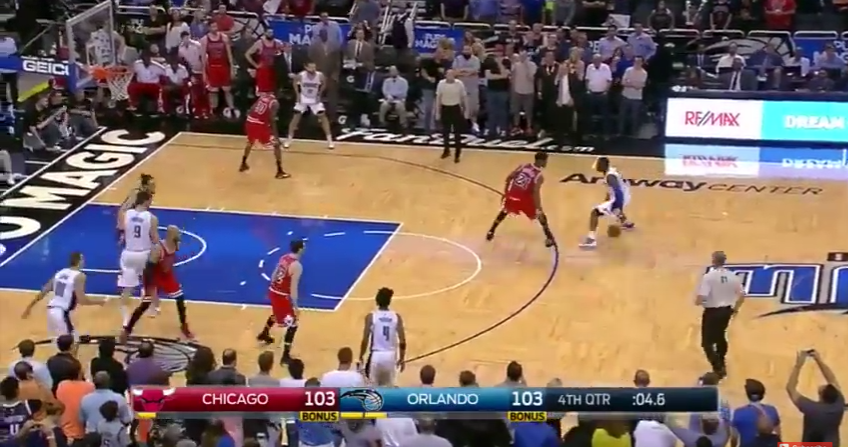 The Orlando Magic returned to action Wednesday night to face the Chicago Bulls for the final time in the regular season. The two conference foes battled ferociously down to the final seconds. There, with the game in his hands, Victor Oladipo would take the game with the go-ahead drive and layup to lift Orlando over the Bulls.

With Derrick Rose back in the starting lineup for the first time since February 27th, the Bulls got off to good start.  The visitors were able to get their offense into a good flow, attacking the Magic while notching seven assists on their first 10 made field goals. Their defense also gave the Magic fits, as they were able to force five turnovers for 11 points. Fortunately, the Magic also returned Evan Fournier, who missed just as much time as Derrick Rose with a hip injury. The Magic trailed 21-29 after the first quarter.

Going into the second, the Bulls began to put the clamps down on the Magic, pushing their lead to as many as 15 points a few minutes in. However, with the help of Victor Oladipo and Elfrid Payton, Orlando fought their way back into the game. Having their lead cut all the way down to the as little as three, the Bulls settled down and get their lead back up to seven.  Just before both teams would get ready for halftime, Elfrid Payton gave the Magic a much needed momentum swing with an emphatic put-back slam over Taj Gibson.

Coming out of halftime, Orlando rode the momentum from the second quarter to cut into the deficit and take the lead for brief moments throughout the quarter. Just when things seemed to go Orlando’s way, the Bulls ripped off a 12-2 run heading into the fourth to lead the Magic by six. In the fourth, the Magic would amp it up defensively by holding the visitors scoreless for the first three minutes. Orlando was unable to capitalize until late in final minutes where a three ball by Fournier cut the Bulls lead down to two, followed by a driving layup tie things up.

For the Magic, Victor Oladipo led the team with a game-high 23 points. Nikola Vucevic followed with 22 points. Elfrid Payton flirted with another triple double with 17 points, nine assists, and nine rebounds. Evan Fournier, in his first game back from hip injury, finished with 11 points.