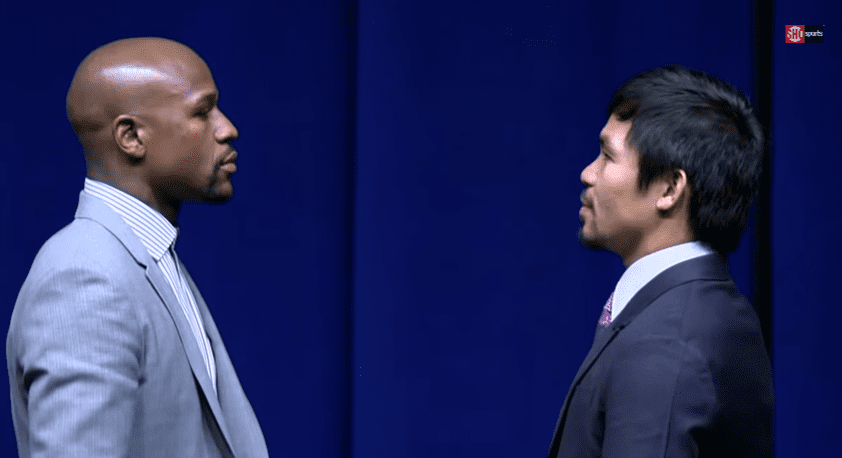 The most anticipated fight of the 21st century we have all been waiting for is finally here!

Floyd “Pretty Boy” Mayweather Jr. (47-0), (a.k.a. The Money Train) will square up toe to toe against the “fighting pride of the Philippines”, Manny Pacquiao (57-5-2) at the MGM Grand in Las Vegas come May 2nd. A bout that will go down as one of the greatest fights in all of boxing history, stamping claim on exactly who is entitled the best P4P fighter in the world. A classic art piece depicting both the beauty of offense and defense between two decorated fighters of our time.

The Sarangani congressman will be entering the fight as the proverbial underdog, possessing a deadly straight left hand, superb footwork, an awkward angle approach, and that blindingly fast hand speed advantage. Let’s not forget his developed right hook and quick in and out, side-to-side movement. His main forte in dictating tempo is literally throwing over a hundred punches per round to overwhelm his opponents. The majority of those flurries are either power punch combinations or those devastating body blows. The right jab will be a key factor when it comes to setting up Pacman’s lead left hand; especially when Mayweather orchestrates his signature shoulder-roll defense. If that’s the case, the current eight-division world champion needs to focus on his volume punching to outscore Mayweather on the judges’ scorecards.

Switching the tables, we have the Grand Rapids, Michigan native “Money” Mayweather, who is listed as the potential favorite to win the May 2nd clash residing in his hometown of Las Vegas. The ’96 Bronze Olympian epitomizes the saying, “a strong defense is a good offense.” The defensive-minded prowess and overall ring generalship of Mayweather has earned him the right to be called one of the all-time greats in the world of boxing. His masterful orthodox shoulder-roll technique allows him to slip, deflect, and block most of his opponents’ incoming punches, even before they happen. Moreover, his ability to use the ring to his favor in terms of range and pace is something to behold. This gives somewhat of an edge to Mayweather if he is able to contain Pacquiao’s offensive output in the earlier rounds. Landing those counter lead right-hand will be Mayweather’s golden ticket if a unanimous decision has to be made.

For Pacquiao, the thoughts of size disadvantage in regards to height and reach should be laid to rest after dismantling both Chris Algieri (5’10) and “Tijuana Tornado” Antonio Margarito (5’11). However, expert boxing analysts will always relay the comparison that both these fighters are in no way in the same category or pedigree as the great Floyd Mayweather. Algieri and Margarito don’t have the same swiftness and agile elusiveness as Mayweather, a problematic factor for the Filipino slugger. The “Pac-Man” will have to corner the American in order to land his formidable left hook. Nonetheless, Mayweather being the savvy veteran he is will always be ready to bring Pacquiao back to the middle of the ring, where he will systemically get back on the scorecards one precision point at a time. Pacquiao’s Hall-of-Fame trainer and long-time friend Freddie Roach will need to concoct up a clever strategy to keep Mayweather by the ropes.

Both of these fighters come from different backgrounds, but are commonly intertwined in a sense that they did everything they could through the sport of boxing to pull through the rough times in life. Whether that be living through extreme poverty on the streets, getting by without a father figure, struggling financially, drug involvement, and other rough circumstances. After undergoing many years of hard work, dedication, and resiliency, both fighters are now at the top of their class in today’s boxing world, influencing and impacting other amateur boxers that literally anything is possible if they put their mind to it.

Just from the fight alone, through the split-purse agreement (60-40), Pacquiao will be taking the small purse of roughly ($120 million) dollars; compared to “Money” Mayweather who will racking in a whopping ($180 million) in guaranteed dollars. According to Forbes, Mayweather is now the highest-paid athlete surpassing Cristiano Ronaldo and “King” LeBron James.

From the public eye, many people have speculated that these two Hall-of-Famers are way past their prime and that this fight should have materialized five years ago. In spite of all the controversial claims regarding the Olympic-style drug testing, promoter issues, and purse size disagreements, differences were finally set aside on account of both the Mayweather and Pacquiao’s individual camps. Negotiations were made and standards were met, resulting in the binding agreement that the clash between these two gifted titans has finally come to fruition.

“It’s all about timing and I think we couldn’t choose a better time,”

– (Mayweather said according to the Associated Press)

“We don’t want to leave a question mark in the minds of fans of boxing, it’s also very important this fight is for the honor of my country.”

– (Pacquiao said according to Sports Illustrated)

Can the ruthless Filipino Southpaw pull off the upset or will the American perfectionist improve his record to (48-0)?

One option remains certain for both these legendary icons after their historic matchup: retirement.