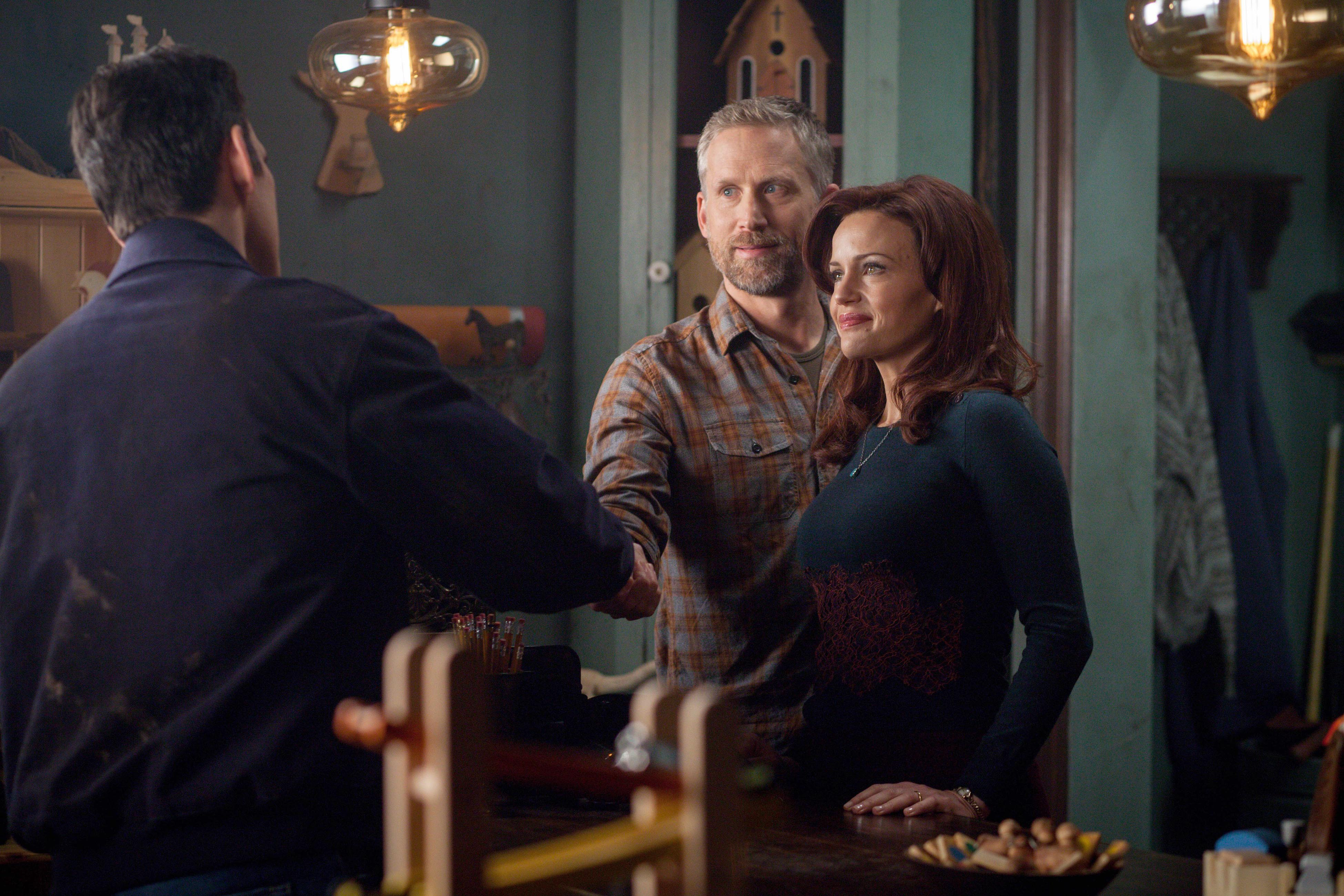 Wayward Pines features Burke and Sheriff Pope squaring off in its opening scene. With no identification or evidence to support Burke’s claims, Sheriff Pope disbelieves everything his suspect offers him. This tells us what we expected would happen following last week’s episode: Burke’s escape attempt was unsuccessful. Burke later leaves his hotel to investigate the murder of his colleague. This infuriates Pope, an odd character who seems to go about his police business in mysterious ways.

We then see Burke and Beverly dancing in her place of work. The dance is a not-so-subtle way to talk without being heard. As Kate mentioned last week, eyes and ears are everywhere. This adds to the allure of Wayward Pines. The show also continues its usage of flashbacks, most of which examine Burke’s domestic life. In the present, his wife and son are unable to track his whereabouts. Burke’s absence fuels rumors in Theresa’s head that perhaps he’s once again having a rendezvous with his ex-lover, Kate Hewson.

Burke meets with Hewson at the toy store where she works. Her last name is now Ballinger, and any effort by Burke to crack the truth about her personality shift is undermined. Nothing in Wayward Pines comes easily. Doubt is constant. Answers are fleeting. The audience does begin to receive added insight into the thought process of these nutty townspeople, though. The past is not to be discussed, and no one is to leave. Your life before reaching Wayward Pines is meaningless. Discussing it equates a sinful move in the twisted mindset of these people.

The confused Burke meets with the wife of one of his fellow agents. According to this woman, the missing agent did landscape for a living, and he wasn’t murdered, his death was a suicide. It’s difficult to comprehend whether or not any of this information is true. Meanwhile, Wayward Pines furthers its commitment to giving Terrence Howard’s character ice cream cones. He menacingly works his way through a cone as Burke meanders through this bizarre environment. Burke and Pope have tense, engrossing dialogues that stand as the show’s top scenes over these two episodes.

Pam, Melissa Leo’s character, returns in predictably ominous fashion. Burke is prowling through the town hospital in search of the coroner. He’s conveniently unavailable for the time being, leaving Burke with no use for the creepy hospital. Pam makes an odd comment that borders on cringe-inducing when discussing Burke’s wife in a passive-aggressive tone. She states how she bets Burke will “want to bang her brains out” in reference to when he reunites with Theresa. This caught my ear because sexually charged dialogue doesn’t usually have a place on networks like Fox. That’s typically reserved for HBO level networks without the worry of greater restrictions.

After thinking he spots Theresa, Burke’s need to remain in the hospital comes back. Dr. Jenkins tells Burke how there aren’t any new patients around, implying to the agent that he’s verging on insanity. The psychiatrist then tells Matt Dillon’s character that surgery will be necessary to eliminate these delusions and schizophrenic ideations. Surgery will have to wait, at least for now, as Burke maintains his sanity enough to avoid allowing a nutty psychiatrist to perform on him.

Burke and Beverly reconnect to remove a chip from Burke’s arm. Wayward Pines has no issue delving into the paranoia of this town. With eyes, ears, and microchips everywhere, no character is free to think independently. Burke starts to realize part of the mystique this community carries. New information isn’t brought in. Current events, and even less current occurrences like Barack Obama’s presidency or the 9/11 terrorist attacks, aren’t known in this environment. Frustratingly enough, Wayward Pines doesn’t care about the past of its occupants, yet the collective town remains stuck in that time frame.

The episode journey of Burke and Beverly has a strange vibe in this week’s installment. Every resident of Wayward Pines realizes how misplaced Burke appears to be. Why then would Beverly have a heavy interest in spending time with him? As Burke and his new friend brainstorm how to escape their psychologically imprisoning surroundings, Theresa decides to find her husband on her own. This would be a welcomed plot addition to the show since Burke doesn’t have many supporters in his corner. It seems that Burke’s son will also be accompanying Theresa on this expedition.

It came as a surprise when Kate and her husband invited Burke and Beverly over for dinner earlier in the episode. Using this as an opportunity to gain information, Burke devises a plan for he and his friend to ditch their chips in the Ballinger’s bathroom. Harold, Kate’s fantasy land husband, exchanges small talk with Burke as the agent sets his plan into motion. While Burke excuses himself after sticking a chip under the dinner table, Beverly makes the mistake of referencing her past. She excuses herself as well during a brief fit with anxiety.

“You think they’re going to run?” That’s the question Harold asks Kate right when their dinner guests leave. When the screen flashes to Burke and Beverly, the bartender acknowledges her dire error. Talking about the past is forbidden. This causes Burke and Beverly to run through the streets as telephones ring and lights flash throughout town. A signal of some sort was evidently triggered during the fateful dinner interaction. When fleeing proves obsolete, Beverly is captured by the locals after she and Burke split up. A barbaric ritual is the following scene. Chained by the hands, Beverly’s sin of discussing the past is the reason Pope slits her throat. This gruesome scene ends a captivating Wayward Pines episode in alarmingly violent fashion.