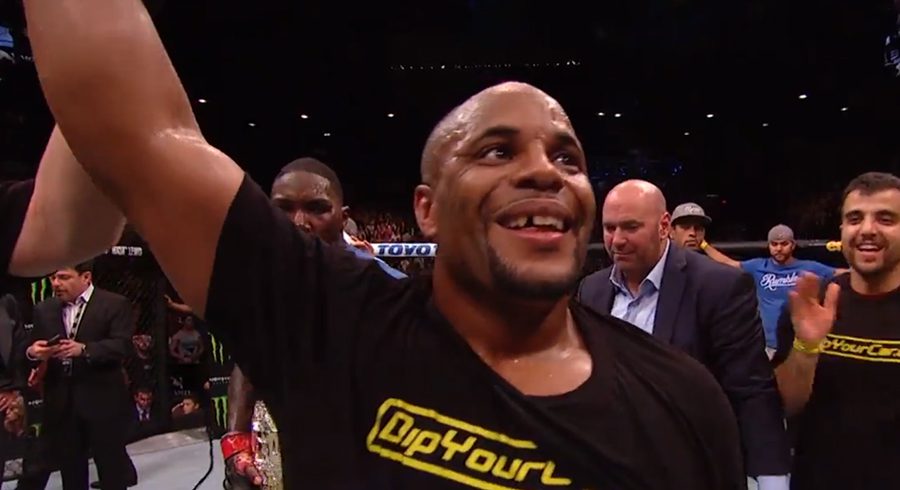 For all fighting fans that had a bad taste left in their mouth from a less than exciting, $100 dud of a boxing pay-per-view, Dana White and the UFC had you covered. If the UFC has not been declared the most popular fighting organization in the world, UFC 187 made it official. Three weeks after the Floyd Mayweather/Manny Pacquiao disaster, the UFC set up a magical fight card that proved to be the best pay-per-view by a wide margin in 2015, if not the last few years. With two title fights as the headline and an undercard that was packed tight with brawlers, UFC 187 was well worth the $59.99 and even more.

The night kicked off with with a flyweight brawl between arguably the two most aggressive fighters in the weight class. Joseph Benavidez against John Moraga was the spark which ignited the wick that was the explosion of UFC 187. A healthy mix of stand up, clinch work, and ground game that was never boring. Moraga kept the fight close by seemingly always landing a big shot when Benavidez was about to take total control of the fight. By the end of the fight the significant strikes landed were identical, but Benavidez ended the fight with a lead in total strikes landed by a ratio of 3:1. Moraga put up one helluva fight, but the judges would unanimously agree on Benavidez as the winner. Without one boring moment in the opening bout, it was but a sign of the excitement that would ensue as this would be the only fight of the night to go the distance.

Unlike the umbareable gaps in between fights on a recent boxing card, once a fight was over it was only minutes before the fighters for the next match were making their entrance.

Next up was a slobber-knocker between heavyweight juggernauts Andre Arlovski and Travis Browne. If I was a betting man (which I am not) I would have bet the farm on that fight not making it out of the first round, regardless of whose hand would be raised in the end. They certainly would not disappoint.

Neither fighter had any intention of taking the fight to the ground as they squared up and in middle of the octagon and proceeded to bash each other with each exchange. The first flurry of punches would prove helpful for Arlovski as he would temporarily rock Browne with a swooping right hook to the temple sending Browne stumbling. He would soon recover and the brutal exchanges would continue through the first round, the majority of which ended with an Arlovski hook that would send the six-foot-seven Hawaiian reeling into the cage. With the round coming to a close and everyone in the building out of their chairs this was clearly becoming a strong favorite for “fight of the night.”

Another collision of monstrous men would end in Browne being hurt by an Arlovski punch, but this time Arlovski pounced on Browne, throwing haymakers. In the tornado of hand grenades being thrown, Travis Browne landed a powerful punch that sent Arlovski to the mat. With the momentum shifting to Browne and Arlovski clearly hurt, Browne jumped all over him throwing looping hooks as he collapsed onto Arlovski’s back. With fatigue steadily showing itself, Browne would throw a sloppy punch missing Arlovski altogether sending himself to the mat, allowing Arlovski to get to his feet and gather himself. This would prove to be the biggest mistake of the fight for Browne. With the seconds ticking down in the amazingly exciting round Arlovski turned up the heat. He had his opponent cornered against the cage and was landing every punch he threw – left hook, right hand, right uppercut, left hook – all landing and all hurting Browne. Browne refused to go down forcing the referee to stop the fight with two seconds remaining in the first round.

The crowd was electric and the atmosphere was heavy, even in the living room I watched from. What a way to begin the night, two fast-paced fights. One of which was already being called fight of the year on social media. Dana White was not finished though. With two title fights still to come, the final fight before the co-main event featured one of the world’s top lightweights: Donald “Cowboy” Cerrone.

Cerrone was set to take on John Makdessi who took the fight on short notice after an injury to Cerrone’s original opponent. One minute into the fight, it couldn’t be more apparent that Makdessi took the fight late because it was all Cerrone from beginning to end. Utilizing his extraordinary reach for his weight division, Cerrone kept Makdessi on the outside with his long jab and skin-slapping leg kicks. Halfway through the second round Cerrone landed a strong head kick on Makdessi. To Makdessi’s credit he didn’t go down, but he did look out on his feet and was attempting to call a timeout with his hands. For those who are unsure of the rules, unless it is in between rounds or a low-blow, there are no timeouts in the UFC. That timeout gesture from Makdessi was all the referee needed to see before putting a stop to the fight declaring Cerrone the winner, extending his current win streak to nine and putting him in title bout conversations with lightweight champion Raphael Dos Anjos.

The first three fights alone had been worth the price of admission and pay-per-view. Now that the first of two main event title fights was approaching, fans around the world refilled thier beers and stocked the popcorn bowl because sparks were sure to fly… and fly they did.

As if the first title fight of the night between Vitor Belfort and middleweight champion Chris Wiedman wasn’t big enough, the testosterone levels of Belfort were publicly questioned by Wiedman and his camp in the days leading up to the fight. Whatever the case was, Wiedman was seemingly taking on a “sheriff” role, as if he was “cleaning up” the UFC. And Belfort was not happy about it.

With the introductions complete, the fight was underway, and just as expected, Belfort was not wasting any time. After what seemed like mere seconds of feeling each other out, Belfort sprang forward with a barrage of punches. Wiedman crashed into the fence covering his face with his forearms. The bottomless tank of stamina in Belfort was showing off early as he threw about 30 punches to the head and body, connecting with more than half. Wiedman was visibly hurt and his eyebrow exploded into a gash that began to leak. With the champion showing signs of defeat, it seemed all but over, until Wiedman took the fight to the mat.

Although Belfort is a black belt in Brazilian Jiu-jitsu, the superior wrestling of two-time collegiate level division I champion Wiedman would negate any attempt of Belfort to get to his feet. The champion had almost immediately advanced to the mount position and began to beat the challenger down. Belfort throughout the years has been known to have a granite chin so referee Herb Dean gave him ample chances to defend himself, he could not. With two minutes remaining in the first round the fight was stopped and Wiedman was the winner. Meaning he beat MMA legend number three… consecutively.

If that had been the end of the UFC 187, fans still would have left happy. But in what has become the norm for the UFC, another awesome fight was in store. The battle for the light heavyweight championship, recently vacated by Jon Jones. Anthony “Rumble” Johnson vs Daniel “DC” Cormier. If styles make fights, this bout was perfect. The dangerous seek-and-destroy brawler in Rumble, who in my opinion is the most powerful puncher in the fighting world since Mike Tyson, against the Olympic wrestler turned calculated MMA assassin Daniel Cormier, who was everyone’s only choice to take the spot that Jones left open. Cormier had let his chances at the title slip away to the judges five months earlier against Jones, so he had made it abundantly clear he would not relenquish his chance at MMA immortality again.

Once the bell rang, the two champion hopefuls wasted no time engaging each other. Cormier was clearly the less muscular fighter and the punching power advantage belonged to Rumble as well. He showcased that ability early in the first round with a well-timed, perfectly-placed right hand that sent Cormier off his feet and flying across the octagon. Without question, any fan of the UFC that has seen Rumble Johnson fight has also seen many of his opponents in this same situation before the fight ends. The difference in this fight was Cormier. His perseverance and mental strength was able to allow him to stay safe and regain his bearings.

After gathering himself, Cormier began to implement his gameplan by grinding Johnson down. He clinched up, drove Rumble into the fence and started to wear his foe down. Constant pressure and relentless takedown attempts was proving exhausting for Rumble by the end of round one. Although Cormier had gone down in round one, he controlled the remainder of the round and would look to do the same in round two.

With hardly any resistance from Johnson, Cormier would lean on and grind him to the ground slowly, using the fence before picking him up over his shoulder and driving him into the mat. Cormier was clearly in control of the bout and Rumble was visibly shaken up from the Olympian being in dominant ground positions. Before the end of round two, Cormier would land two short elbows from side control that would open up a gash on the left eyebrow of Rumble, which would prove disastrous for him.

Wincing in pain, Rumble reluctantly stumbled into round three only to be submitted by eventual light heavyweight champion Daniel Cormier. In the classiest show of trash talk, maybe in the history of fighting, after Cormier was announced champion he took the mic from Joe Rogan and said simply:

“No disrespect for you Joe, or the 16,000 here, but I have a message for one man. JON JONES! Get your sh*t together boy, I’m waiting for you!” He then promptly ran out of the octagon, ending a spectacular event with a bang, the same way it started.

My hat is off to the UFC for saving the Spring season for fighting fans around the world. Without question Dana White has managed to catapult his fighting organization into the top spot in the world. UFC 187 proved that undoubtedly.