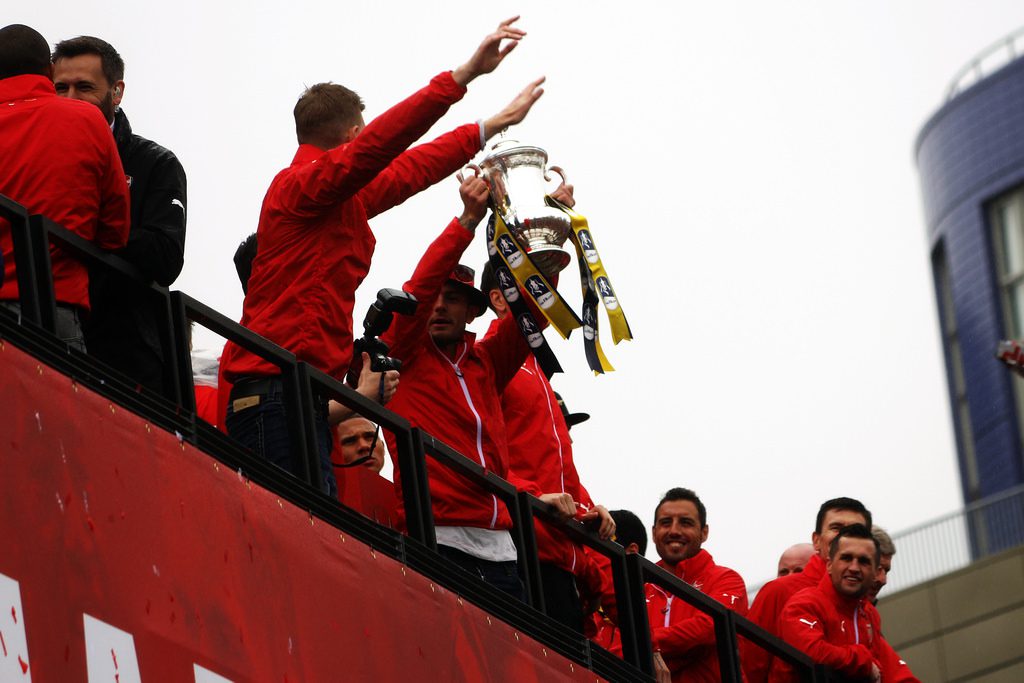 Arsenal became the first club in England to lift the FA Cup 12 times after defeating Aston Villa 4-0 in the final on Saturday at Wembley Stadium.

Villa came into the match on the back of a final day league defeat to relegated Burnley, but managed to avoid relegation at the end of the season. Tim Sherwood’s side had been in good form before the defeat with striker Christian Benteke, in particular, enjoying a formidable goal-scoring run. The striker had netted in the semi-final victory over Liverpool last month, helping his team reach the final.

Arsenal, on the other hand, finished the season in third, defeating West Bromwich Albion 4-1 on the last day. The Gunners were eager to defend their title and seal their season with silverware.

Arsenal manager Arsene Wenger decided to start the in-form Theo Walcott, who had scored a hat-trick against West Brom, instead of striker Olivier Giroud. The decision nearly paid off immediately as Walcott was eager to attack, nearly catching the Villa defense off guard with his pacey runs.

Villa were always going to threaten Arsenal on the counter-attack, as they switched play well between the wings. Their first cross into the box, however, was claimed well by returning goalkeeper Wojciech Szczesny. Benteke’s first sight of goal was cleaned up by Szczesny before the striker was called back for offside moments later after running through on goal. Villa showed early signs of aggression in their play, but they were sloppy in possession and failed to keep the ball.

The first corner of the match was awarded to Arsenal after Alexis Sanchez caused the Villa defense problems with his dribbling. Villa defended but couldn’t prevent another corner, with Laurent Koscielny this time heading wide.

Arsenal began to enjoy plenty of possession and passed the ball well around the pitch. The Gunners were awarded another corner as they piled the pressure forcing Villa into mistakes. The corner was played short, and tricky-winger Santi Cazorla was fouled just outside the box as he dribbled past Benteke.

A poor Arsenal free-kick led to a villa counter-attack, but again Szczesny was well positioned to punch the ball clear. Villa’s target-man was clearly Benteke, Arsenal knew this, defending well to prevent the striker getting on the end of the ball.

The best chance of the half fell to Arsenal after Sanchez did well to get a cross into the danger-zone, but Villa keeper Shay Given produced a brilliant reaction save to deny Koscielny an opener.

It was end to end football with Villa breaking again, but Szczesny was on hand to catch the cross before Bellerin broke down the right-flank, crossing to Aaron Ramsey who could only slide his effort wide of the post. Ramsey was involved again moments later, finding himself through on goal, but the Welshman couldn’t keep his composure and instead clipped his effort over the net.

Arsenal continued to dominate in all areas of the pitch with Villa’s only threat coming from crosses that the Gunners’ goalkeeper had no problems dealing with.

Arsenal thought they had taken the lead on 24 minutes, but Villa left-back Kieran Richardson did exceptionally well to read the play and get a block in on Walcott’s effort to keep the scores level.

Arsenal continued to push forward and looked the more likely of the two sides to grab the lead, suffocating Villa in their own half and keeping them away from their 18-yard box.

The goal eventually came in the 40th minute when Walcott smashed home a Sanchez flick-on to send the Gunners fans roaring in celebration behind the Villa goal. Walcott began the play, collecting the ball from a brilliant Francis Coquelin diagonal pass before finishing with a vicious volley.

Arsenal began the second-half intent on adding to their lead with Ramsey coming close, but he could only shoot straight at Given. Villa looked to have changed their approach as young midfielder Jack Grealish began to keep possession and attempted to dribble directly at the Gunners’ defense.

Five minutes into the half, though, and Arsenal had a second through a phenomenal Sanchez shot. The Chilean collected the ball, and from 25-yards out sent a swerving shot past the helpless Given.

Sherwood looked to respond by bringing on striker Gabriel Agbonlahor to partner Benteke up front in place of his midfielder Charles N’Zogbia. But Arsenal continued to dominate possession and kept Villa on the back-foot.

Given was forced into a succession of saves, first from Walcott’s effort, who was flagged for offside anyways, and then getting down well to his left to prevent Cazorla from scoring.

Arsenal continued their onslaught as their corner count continued to rise. Wenger’s men had failed to produce much from set-piece opportunities up until the 62nd minute when Per Mertesacker rose highest to head past the rooted Given, effectively carving his team’s name on the trophy.

Sherwood’s substitutions didn’t make much of an impact until the 80th minute when Agbonlahor felt he should have been awarded a penalty. Replays showed that the striker was fouled just outside the box, but the referee had waved play on instead.

Villa began to feel victimized as Grealish was brought down cynically in the box five minutes later, but again the referee ignored protests and waved play on. It wasn’t to be Villa’s day.

Arsenal were patient in their passing and began to lower the tempo, while remaining focused in defense. Substitutes Alex Oxlade-Chamberlain and Giroud linked up well, with the Frenchman sealing the victory in style by scoring the fourth goal with literally the last kick of the match to crown Arsenal FA Cup Champions at Wembley.

Unfortunately for Villa, they never looked a threat from the first whistle and were poor throughout, unable to test the Arsenal keeper. Sherwood admitted in an interview after the match that Arsenal were “too good for [Villa] on the day” and that his side failed to “nullify” Arsenal’s threat. The manager did offer words of optimism for his side, encouraging his players to use the defeat as a “learning curve”.

Arsenal were the far better side and were deserved winners, dominant in attack and defense. The Gunners finished their season off well by defending their title and making it two consecutive trophy-laden seasons after previously going nine years without silverware.

Despite the loss, Villa should be proud of their achievement and will no doubt be relieved that they avoided relegation as well. Arsenal, on the other hand, will be waiting anxiously for the start of next season, setting their sights on the Premier League title, where they dream of fastening yellow ribbons around the golden lions.