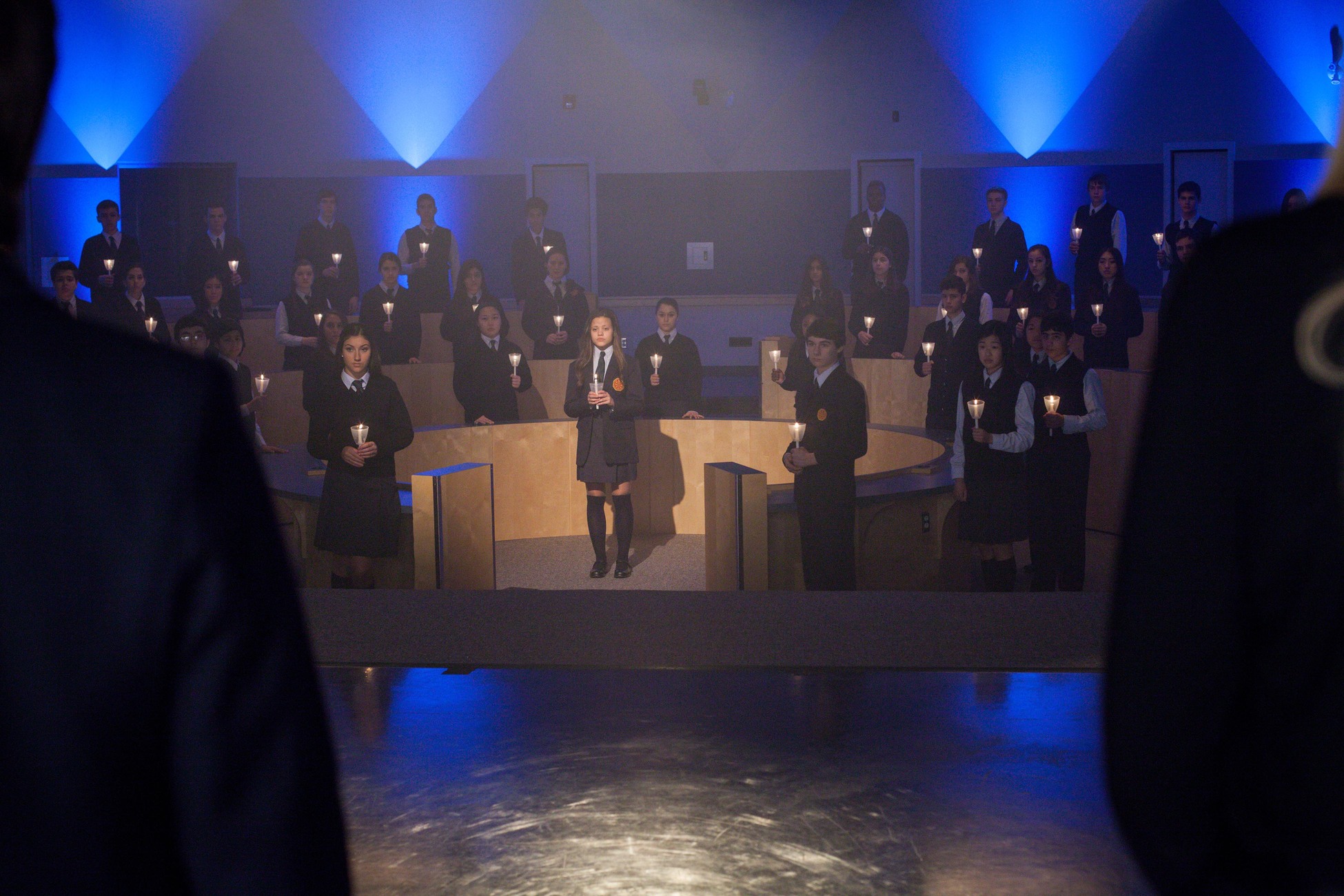 Wayward Pines returns from a brief break period with a town consumed by a chaotic makeup. Crashed cars, burned down buildings, and a long-haired, disheveled Pilcher give the audience an unclear picture of how the community reached this war-torn point. Clarity likely won’t arrive until later, however. Back in the assumed present, Pilcher leads Burke and Pam into a secret layer located within a mountain. Bonus awesome hideout points, success! A somewhat bearded Burke has plenty of questions. Answers are predictably strange.

Unfortunately, Wayward Pines shifts to Ben. The boring teen has quite a bit weighing on his mind. Just being responsible for the eventual fate of every human inhabitant roaming the planes of the earth. That’s all. Because if you remember correctly from that horribly constructed, yet insanely revelatory episode from a couple weeks back, Ben and his fellow youths are the secret to the future. The scene switches to Kate working in her shop. A package has been lost, and the ramifications could be significant.

Theresa meets the woman who lost her job in favor of Burke’s wife. Faced with this awkward encounter, Theresa unsuccessfully attempts to weasel her way out of the position. In need of fairly serious medical care, Pam does work on Burke’s right arm. She discusses Burke’s noble intentions as commendable, but more heavily weighs on the importance of Wayward Pines and its future. The audience learns that Pam is Pilcher’s sister. As Burke digests this news and the other pieces of knowledge falling his way, the sound of an aberration fills the air. Burke pulls his gun on the imprisoned creature before a scene shift.

“Who are they?” Pilcher responds to the question phrased by Burke by stating the beast is a cousin of the previous aberration form. A gas of sorts is used to contain the force’s adrenaline. We then see a flashback of Pilcher and Pam in the educational world, committed to the message that now has shaped Wayward Pines. Pam, a recovering drug addict, is far more positive and cheerful in the past than she is in the present. Pilcher authored a book while embracing the type of technology capable of saving a portion of humanity. I’m not convinced Wayward Pines can ever recover from last week’s unfavorable plot twist, but this episode does a quality job of dropping tidbits juicy enough to keep us interested.

Meanwhile, Theresa’s boss proves angry when tested. Her misery is mercifully ended when Kate pops in, hopeful of a talk. As Burke’s wife does research on her own, the agent continues his inquisitive approach with Pilcher. They roam the expansive headquarters, a place with human test subjects, countless employees, and massive devices. When Burke asks about how many human subjects are being utilized, Pilcher responds with ominous, and unintentionally humorous, silence. The talk with Theresa and Kate occurs, although constant scene-shifting in this episode prevents a rhythm.

What does concretely build in this Wayward Pines installment is Kate’s growing sense of uneasiness. “I want to change things.” Those are strong words by the former agent. Is a revolution coming? A necessary response to the surrounding madness? With her husband evidently on board, Kate’s desperation seems genuine. She must know something terrible is on the horizon. Burke and Pilcher slowly begin to clash from an ideological standpoint. All the human subjects, “abducted” individuals in the mind of Burke, are asleep. They’re unconscious as Pilcher plays the role of God, “saving” by his account of the matter, but possibly doing more harm in the eyes of others.

Another flashback. Pam’s happiness remains left in the past as Pilcher meets Mrs. Fisher. I wish she would’ve been left as a permanent part of the past, she adds little to nothing on a storyline trapped next to Ben, but at least she’s committed. Annoying and useless, but committed. Fear not, though, for Pope has returned! With a night of March Madness and rocky road awaiting, Terrence Howard’s character takes a ride with Pilcher. Wayward Pines lost a considerable degree of its power when the sheriff was killed. Seeing him appear is a pleasant surprise.

According to Pilcher, he’s looking for people like Pope. We discover the sheriff has a criminal past impacted by family trauma. Capitalizing on Pope’s vulnerability and unhappiness with his life trajectory, Pilcher lures the now deceased man into his web. This episode is heavy on Pilcher content, focusing on him more than any other character. He’s certainly an interesting brain, but the series felt stronger when Burke was always the backbone, the mainstay. An episode here or there has focused mostly on Ben, this one on Pilcher, and it’s a questionable tactic to balance such importance on characters I doubt many audience members love.

Pilcher does his best to implement his twisted logic into Burke’s mentality. The scientist’s lengthy backstory is more tired than appealing, more comical than serious. Pilcher relies on conspiracies and assumptions to rule his thought, a line of thinking that doesn’t blend with Burke. Kate and her husband continue their plot. The specifics of the plan aren’t made available to viewers, but the stakes of this Wayward Pines subplot are implied to be high, life-or-death, even.

Burke voices his desire to end the executions and surveillance existent in the community. That chaotic scene referenced in my first paragraph returns as this episode nears its conclusion. Suicide prevailed as the new reality was “too jarring,” according to Pilcher. Whole families died, the worst of humanity revealed itself, and a darkened period was the norm. Pilcher genuinely believes an enlightenment is inevitable because of the upcoming young minds.

Thankfully, Ben barely appeared here, but his importance isn’t going anywhere. He enters a cult-like setting before the show cuts back to Burke and Pilcher. The scientist vocalizes his fear of a revolt, a backlash of people removing their chips, plotting an overthrow, such as Kate. Burke outwardly  sympathizes with Pilcher, but his sincerity is questionable. Overall, this episode isn’t groundbreaking television or particularly enjoyable entertainment, but it’s an improvement from what Wayward Pines sadly became two weeks ago.