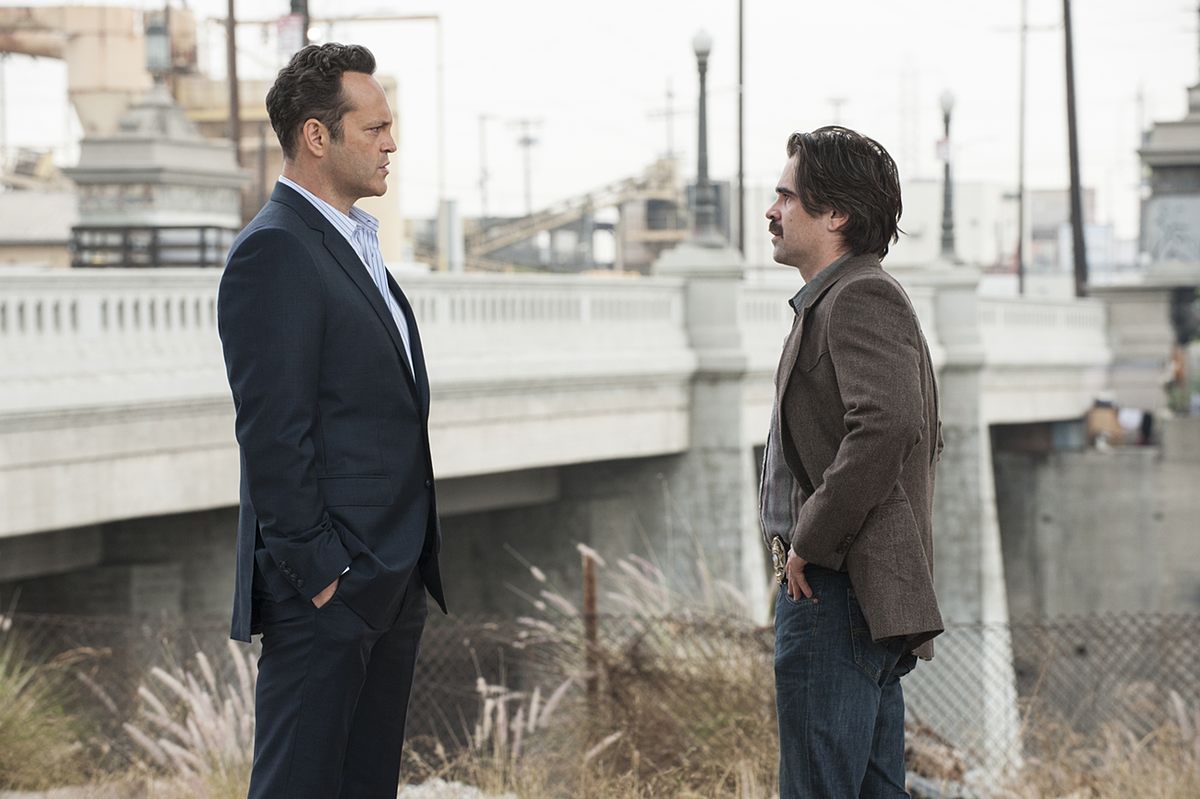 True Detective begins its latest episode with Frank resting uncomfortably in bed. He has a profound discussion with his wife, questioning both his current state and legacy. Early into the series, Vince Vaughn embodies Frank better than his skeptics could have predicted. The camera carefully zooms in as Frank tells a strange tale of his past while in fatherly induced captivity. A rat had started to nibble on his finger, causing the character to smash the animal to death. It’s a testament to the darker side of Frank’s individual nature. Roughly eight minutes of True Detective are spent on Frank and Jordan talking.

In a striking scene shift, the show switches from Frank’s bedroom to Casper’s corpse. The Season 2 crew stands together with Ray, Ari, and Paul hearing specifics about the body. Casper was bound upside down. He also suffered pelvic wounds from close range. True Detective vividly puts into detail how the man experienced a horrific death. As his unfortunate fate is analyzed, the jurisdiction issues are discussed with equal weight. Ray then learns his place in the case of Casper’s death before he delves into the sickening details with Frank.

Another beautiful shot of California’s mass freeway system, a scene similar to one showed last week. The emotionally distant Paul meets with his mother, a scatterbrain type who can easily be imagined giving her son an odd childhood years before. True Detective has established Paul’s intimacy and relationship issues with women early on. Meanwhile, driving together are Ray and Ani, a mismatched pair who contemplate the difference between real and knock off cigarettes.

True Detective continues to nail down the importance of Casper in Frank’s life, his business life, in particular. Casper was due to make a payment on behalf of Vaughn’s character, but now being a dead man, Casper is giving Frank tremendous logistical issues. He’s financially short without the backing of the deceased city manager. Through 20 minutes of this showing, True Detective doesn’t make a massive impact from a plot perspective. Superb acting and a fittingly dreary backdrop compensate for a slow pace, but the momentum doesn’t heighten until later.

Another aspect to consider will be the success of Ray and Ani as a pair. Paul intermittently stakes a claim next to the couple, but he’s the least experienced member of law enforcement, and he isn’t an investigator. Nevertheless, Paul is channeled with a subtle pain by Kitsch, a clear trauma that he carries daily. True Detective will likely further examine his past throughout the season.

We then meet Ray’s ex-wife, Alicia, played Abigail Spencer. Fans of Rectify will instantly remember Spencer and hold her in high regard. She discusses how her son is anxious around Ray, and the unsettling notion is that Farrell’s character doesn’t have a place in his youngster’s life. The audience sees his heart, his commitment to a role despite his toxic nature, but Ray has a difficult time making that heart positive. Alicia essentially wants to remove Ray’s visitation rights in their entirety. His reckless nature is on the verge of completely destroying his fatherhood.

Finally some violence! Frank’s henchmen implement their will on a man they rear-ended. Once the goon squad is finished, Frank approaches the beaten individual. A subtle but clear threat is directed at him. Ray and Ani visit a clinic Casper attended where he sought treatment for a proclivity for seeing prostitutes and anxiety, among other things. Casper is defined as “sexually obsessed,” but no concrete leads come forward. We do open the Ani archives a bit, however, as her darkened past is given a mention.

To my surprise, True Detective continues to lag from a pacing standpoint. 40 minutes in, we’re yet to have any kind of breakthrough moment. The pace isn’t enough to justify blind criticism or a backlash, but it’s a component worth keeping in mind. My gut tells me that Nic Pizzolatto is putting forward background information and character motivations, aspects usually prone to lessening the tempo, before eventually embracing more quickly arriving madness like in Season 1.

“We get the world we deserve.” Profound words from Ray’s mouth, a bitter detective who has no qualms about discussing his baggage with Ani. One of their talks ranges on topics from feminism to family, the police latter to city turmoil. As this True Detective installment winds down, Ray reaches a critical point. Is Casper’s case supposed to be solved? He asked a similar question to higher-ups earlier, but he offers a more thoughtful version to Ani. Point being, the closer the crew nears a resolution on Casper’s downfall, the higher the likelihood of a situation becomes.

As Ray and Ani break ground on their partnership, Paul’s intimacy issues remain problematic. Emily, his on-and-off girlfriend, presses him for his time in the military, for his family situation, for anything. “You hurt me seeing you,” are a few of her many emotional words. He dodges blame at every corner, blaming Emily for pressing rather than introspectively questioning his own fault in the matter. Paul is a refreshingly real character, far from one-dimensional or usual.

Visiting a lead Frank threw Ray’s way, we encounter certain depravity only reserved for a show with the makeup of True Detective. Rocking a twistedly unsettling animal mask, a shadowed figure shoots Ray in the chest with a shotgun. Upon stepping closer, he fires again. We can only hope the detective had on a bulletproof vest. Is it possible Farrell’s character is already killed off the series? Doubtful, at least that’s what I’m telling myself. He doesn’t appear in the scenes for next week’s episode, but I can’t imagine an actor of Farrell’s pedigree agreeing to a TV spot for merely two episodes. That said, HBO has never been afraid to kill meaningful characters. Until next Sunday, this will remain a cliffhanger subplot.