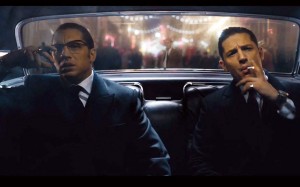 If you like the London gangster scene and Tom Hardy then you’re in luck! Hardy will be starring in Legend, where he’ll be playing the Kray twins, two real-life gangster brothers that aimed to misbehave. Hardy has come up with plenty of aces in his career (most recently Mad Max: Fury Road), and this looks like it will be a shiny new addition to the pile.

Brian Helgeland directed this biopic, and he seems worthy of the task, as he’s penned L.A. Confidential. As far as directing goes, he made his debut with Payback, an underrated, gritty tale of revenge, but was most recently sitting in the captain’s chair for 42. He’s not the best director for a film with such potential on paper, but the trailer is promising to say the least.

Judging from the trailer, the film looks sharp, witty, and energetic as hell. Hardy looks like he has fantastic chemistry with himself as well, playing Ronnie and Reggie Kray. Ronnie’s the homosexual muscle of the two, and Reggie’s the brain. That’s right, we get to see Tom Hardy play a homosexual badass.

Joining Hardy is Emily Browning, Christopher Eccelston, and of course, Chazz Palminteri. Jeremy Irons, Edward Norton, Nicolas Cage, and Michael Keaton are the handful of actors who have successfully played their own twin. Hardy looks like he’s about to get on that list and shoot to the top.

Oh yeah, Jean-Claude Van Damme played his own twin too. Let’s not forgot that historic moment.