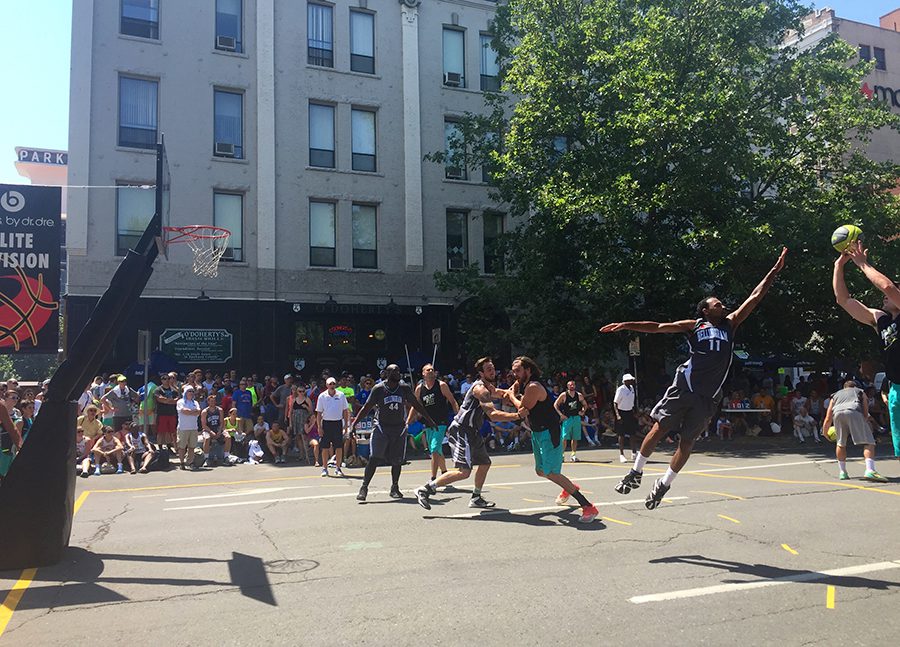 Imagine the streets of your hometown lined with not a multitude of cars and urban chaos, but a plethora of half-court basketball games, all being played with professionalism, passion, and the ever-visible glow of joy. Every age, every level, all gathering together at the town’s epicenter to compete in what’s most surely the largest 3-on-3 tournament in the world. This is, in fact, the magic of Spokane, Washington’s annual basketball celebration, titled very appropriately, Hoopfest. Although this is a spectacular display of competition, and one that’s been in existence for over 25 years, this year marked the first time that ESPN broadcasted the event live on SportsCenter.

Finally, this remarkable tournament is getting some much-deserved visibility thanks to the efforts of an incredible team and a city that’s undeniably passionate about its basketball. Hoopfest is not only one of the most impressive displays of street play anyone will ever witness, but it’s an event forged and propelled by community, sustained by spirit and at its core, represents a deep love for the game that just needs to be shared with the world.

I believe a brief history of the event is in order, as such an incredible celebration doesn’t just happen overnight. In the late ‘80s, independent groups in both the Midwest and Spokane joined together to develop the idea for Hoopfest and manifest it into reality. The Midwestern folks were supremely passionate about propelling the tradition of 3-on-3 street ball for future generations to come, while the good people of Spokane felt similarly, but with a mission-driven goal to raise money for the Special Olympics. Rick Betts and Jerry Schmidt joined together and the rest was history… well, more so that there was diligent pounding of the pavement to attain signatures from local businesses, businesses whom eventually numbered in the greater majority, propelling authorization into action, and from there permits were granted and 36 courts later… the rest was history.

In 1990, the first annual Hoopfest was born, consisting of 2,009 players making up 512 teams to play in bracket-style competition. Fast forward to 2015, and the event has grown astronomically, now including over 28,000 players competing among 7,000 teams. Not to mention, the fan base turnout equates to 225,000 fans, more than Spokane’s total population!

During this final weekend in June, 42 city blocks are shut down and converted into 430 basketball courts, all of which need to be surveyed and kept up. Each and every game played boasts court monitors and score keepers, the reason the event requires the aid of roughly 3,000 volunteers. Each game lasts either up to 25 minutes or until one of the two teams reaches a score of 20. A regular shot and free throw equal one point while a deep shot from behind the perimeter equates to two points. There are a multitude of divisions including the elite, which boasts that of past and present college players, ex-pros and overseas players, men, women, children, disabled persons, including wheelchair hoops, and a Special Olympics class. It’s quite remarkable to see the diversity, kindness, and community bustle within the downtown streets of Spokane: a true spectacular indeed.

Another very cool aspect of Hoopfest is that one can witness incredible, high-level basketball even after the professional and college tournaments have concluded on public airwaves. For example, executive director Matt Santangelo, played on a team filled with University of Gonzaga alumni, all of which are highly skilled and make for some intense basketball play. Matt graduated in 2000 from Gonzaga and had a successful career post-college playing for the Italian League and Men’s USA Basketball. Most of the guys you see in the elite squadron have similar credentials, competing aggressively and with tons of flavor. It’s an absolute treat to watch the city get wild for the guys they’ve watched grow up while supporting their beloved Bulldogs.

It seems there’s so much love for the community and event, both from the outside and from within. Many of the leaders, like Santangelo, have a rich history with the city and the game itself, making the energy of the event what it is. It’s really the people that make this thing so special.

In an interview with ESPN, basketball legend and Gonzaga alumni John Stockton and his son, David Stockton, current guard for the Sacramento Kings, speak to how Hoopfest is gravely important to their lives and what the tradition means to their family and the city of Spokane.

Marketing director-extraordinaire Bailee Neyland gave Baller Mind Frame some insight into the specific ways Hoopfest is able to help on both a local and national scale, while also speaking to her personal journey in recruiting the worldwide leader in sports to the city of Spokane to shine an illuminating light on this basketball phenomenon.

From the elite showdowns on the Nike Center Court, to the dunk contests, to the Toyota Shoot Off, half court-car giveaway, to the streets being lined with not only hundreds of basketball courts, but yummy vendors of delicious treats and shopping kiosks, Hoopfest is something you have to experience at least once in this lifetime.