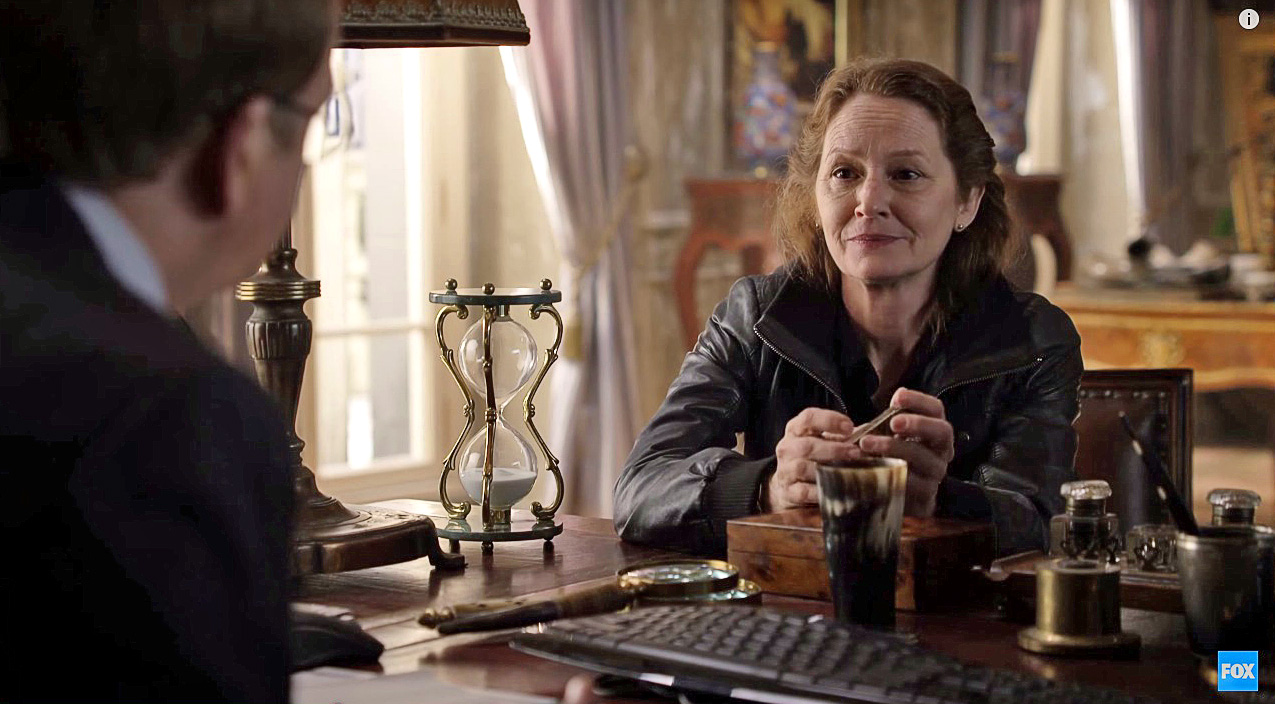 Wayward Pines begins its latest showing with Burke carrying his bloodied son into the emergency room. Stating that “children are our most precious resource,” Pam attempts to calm the justifiably anxious agent. With Ben still unresponsive, Theresa joins the hospital room. Luckily for fans of the awkward teen, the doctor believes Ben will make a full recovery once he regains consciousness. This development infuriates Pilcher. He had already been sensing a revolution, and a bomb exploding in his beloved Wayward Pines community only confirms that level of paranoia.

A flashback shows a nutty Kate in a padded room with Pilcher. He’s studying her every move as insanity overtakes her. The ubiquitous Pam is there, also haunting Kate’s dream, with a syringe in hand. Meanwhile, the citizens of Wayward Pines discuss the aftermath of the explosion while also being summoned to a fellowship gathering. An obviously critical development in this series is the bomb. If there was ever a chance of Burke returning to his previous mindset, in turn embracing revolutionary thoughts, one would think those died with the injuries endured by Ben.

That said, I still doubt that anyone “got to” or “brainwashed” Burke. This puts his character in a difficult position. If he maintains his sheriff status and accepts his new reality, he’s basically siding with the Pilcher and Pam types of the world, eliminating his skeptical instincts in the process. If he joins Kate and her fellow rebellious running mates, he would be teaming up with a core who as a collection viciously harmed his son, albeit by accident. Good luck choosing between the two, Burke.

Wayward Pines has started relying on showing Pilcher and Pam as a pair. Attempting to spot a snake in the grass, Pam conducts interviews with surveillance workers. She needs to ensure herself that they’re fully able to perform their duties without restrictions. With Theresa at his side, Ben awakens. Sigh. The goofy teen looks even more pale, and his annoying presence is almost enough to ruin any momentum the series had gained. Harsh, I know, but I’m profoundly bothered by the “prototypical awkward teen” character who plagues far too many low level shows. Wayward Pines has enough redeeming qualities to surpass other Fox series, but its reliance on a boring, played out character is a shame.

Mrs. Fisher makes an appearance. She gives a speech to Ben portraying him as a martyr like subject. Yes, he’s still alive, but his survival through this ordeal and youthful presence could make him the future of Wayward Pines. As the boy is nursed to health, Pam continues to talk with the surveillance team. One worker admits that he allows questions and doubts about the community to slip. “It’s just human nature to ask questions.” Words from the honest, but potentially self-harmful, employee. That level of honesty probably won’t sit well with a figure such as Pilcher.

It’s clear that Mrs. Fisher’s words impacted Ben. Burke originally had one of the bombing culprits in his grip, a decision that ultimately resulted in the agent letting him go. Sounding like a regurgitating, robotic Mrs. Fisher, Ben may have a point, but it’s absurd for the young man to allow a lunatic of a teacher to overrule his reassuring father. Pilcher and Pam talk about the interviews with the surveillance team. Determining that the problem must be coming from elsewhere, Pilcher considers intensifying his search.

Burke decides to pull back his layers to Theresa. He opens up about a past mistake where he let a suspect go with dire consequences, and also explains how he and Kate grew closer together. This occurs moments before Theresa and Mrs. Fisher have a confrontation. Theresa calls her out and is met with a passive-aggressive hostility. Once Burke leaves the hospital, he reports to the call of a missing truck. The worry is that another bomb will be placed inside the vehicle. A revolution is certainly growing with Wayward Pines. A pivotal question for the audience to ponder is which side Burke will end up choosing.

Kate rots away in her jail cell. This episode features multiple flashbacks of the former agent, all of which showcase her alongside Pilcher. The scientist isn’t Ben or Mrs. Fisher level terrible, no reasonable soul would put that on him, but he’s not nearly as engaging as it seems Wayward Pines wants him to be. The only character who neared Burke in terms of commanding power was Pope. Sadly, we know Pope didn’t last long in Wayward Pines. A flashback turns into reality when Pilcher confronts Kate. He despises the “lethal danger” that Kate put the citizens in.

Pilcher’s biggest ideological block is his unwillingness to accept that the occupants of his town had lives prior to their entry. As the surveillance worker said earlier, “it’s just human nature to ask questions.” Pilcher doesn’t want questions. He wants total acceptance and complete denial of the past. How reasonable is that? Such a standpoint lends itself to revolutions, to dissenters, to mindsets like the one Kate is currently displaying.

Pam cracks. Boy does she crack. Showing serious emotion for the first time, she disagrees with Pilcher over his decision to punish Reggie, giving us a name to the surveillance employee. It appears that he’s buried alive in some sort of enclosed chamber, providing Pilcher points in the bizarre inflicted death category, but this murderous action feels unnecessary and over the top. It’s a sign of weakness on the part of Pilcher. Killing Reggie has the vibe of a dictator, not a scientist.

Burke locates Harold as the episode nears its conclusion. Warning shots and a blow to the face precede Kate’s husband being handcuffed to a tree. Making it beyond Harold’s level were two of his comrades, individuals who thought they escaped the unrelenting grip of Wayward Pines. They’re eaten by aberrations. Score one for the beastly creatures of the community’s underbelly! We have two episodes left, and I have no idea what this off-the-rails series has in mind.