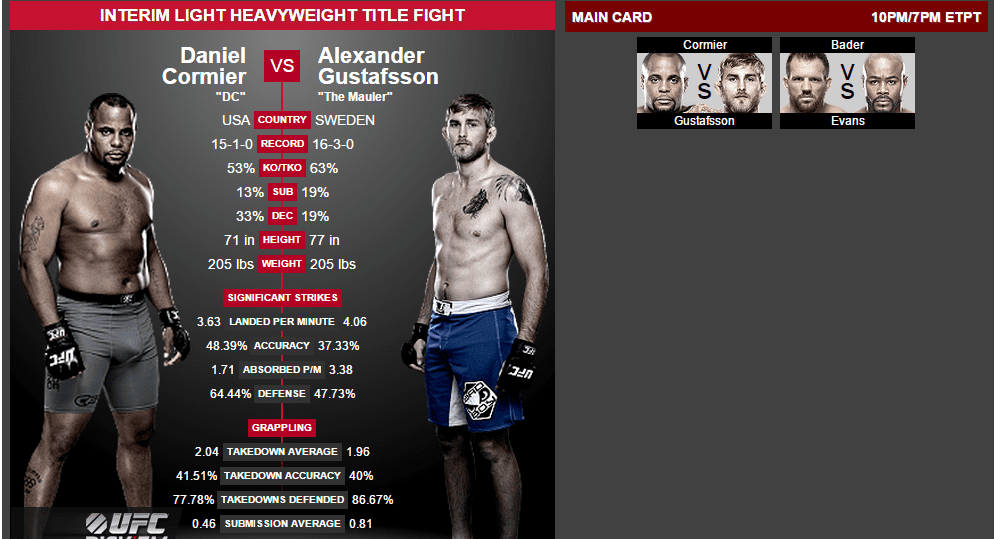 Daniel Cormier is set to defend his light heavyweight title for the first time against Alexander Gustafsson in the main event at UFC 192 on October 3rd. Guaranteed to be a fantastic fight between two of the most competitive and skilled fighters in the UFC. As masterful as both men are in their craft, they would not be in this situation without the ill-advised actions of former light heavyweight champion, Jon “Bones” Jones. Not to detract from either fighter whatsoever, but the fact is both men were defeated by Jones by decision. While both were very close and entertaining fights, it still means both fighters were in the rear view of the champion as he sped along towards new opponents.

Then how did Cormier and Gustafsson end up here?

Cormier won the light heavyweight championship after eventually replacing Jon Jones in what was supposed to be his ninth title defense against Anthony Johnson this past May at UFC 187. Anthony Johnson was coming off a second-round knockout win over Alexander Gustafsson at UFC on Fox on January 24th. Cormier would go on to wipe the floor with Johnson in the title match proving he’s the best in his weight class. After Cormier won that fight, a clash between him and Gustafsson was almost automatic. With all this excitement it is easy to forget that this wonderful matchup would not be happening if it wasn’t for the ridiculous actions of Jon Jones.

With Jones being arrested and stripped of his title in April the door was wide open for the rest of the UFC light heavyweight division. Once Jones was suspended indefinitely from the UFC Dana White knew exactly who should take his spot in the upcoming fight for the title against Anthony Johnson. The fighter who just narrowly lost to the former champion. Cormier, who would never let an opportunity such as that pass him by happily accepted the fight against Johnson with little time to train. Johnson’s lack of wrestling ability was obvious as Cormier took the fight to the ground early and often on his way to a third-round submission. Cormier’s emotion was apparent as he then proceeded to call out Jon Jones after his win against Johnson. It was only appropriate, for without Jones, Cormier would not be in that fight for the belt.

Alexander Gustafsson became most well-known for his medieval-like battle against Jon Jones that he eventually lost by decision, at UFC 165. That fight would become the 2013 fight of the year and it would let the fighting world know that Alexander Gustafsson was nothing to scoff at. Not only fighting fans, but even Dana White, who considered an immediate rematch. It would have happened if the hate between Cormier and Jones wasn’t so deep and profitable. Money makes decisions easy, but Gustafsson was set on climbing his way back to defeat Jones. It was becoming clear that Jones was not only drawing fan interest, but was forcing his division to be competitive. Gustafsson wanted Jones again, but Anthony Johnson stood in his way. Another example of a fight that never would have happened without Jon Jones. Too often has the UFC seen fighters loose a championship fight and take a year off. Not with Gus. Not if it meant he got Jones again. So the fight was set, it was to be Gustafsson vs Johnson, main event for UFC on Fox 14. To the victor a match against the champion.

By the time the fight arrived, Gustafsson was the favorite. Johnson, who used to be a middleweight had now become a well-rounded light heavyweight. A big jump in weight, but in his fights leading up to this one it showed he had developed knockout power. Betting odds were on the Swede, but Johnson’s power would prove to be too much for Gustafsson. A vicious display of ground and pound from Johnson ended Gus’s night far earlier and on the wrong side than he expected. Anthony Johnson would have his shot at the title and Jones. The two things Cormier and Gustafsson wanted most. but had already squandered. UFC 187 was to headline Jones and Johnson, “Bones” vs “Rumble.”

The fight was to take place in May, but Jones would never make it that far. In April, after a long list of unfavorable actions by the former champion, it all came to a head. He was involved in a hit and run accident involving a pregnant woman in Arizona.

Dana White was left no choice but to strip Jones of his title and replace him with Daniel Cormier. In a one-sided victory Cormier would become champion. Cormier was on top, somewhere that three weeks prior to UFC 187 no one thought he would be. Other than his amazing training regiment and his camp who can Cormier thank? That’s right, Jon Jones.

UFC 192 will be well worth the watch. The fights on the main card leading up to the title bout will be entertaining as well. Styles make fights and Cormier being a grinder and a wrestler with great hands will definitely try to negate the striking ability and takedown defense of Gustafsson. Big time MMA fans will really enjoy this fight as it could turn into a grappling chess match against the cage. Regardless of how the fight goes or who wins, neither fighter would be here if it wasn’t for Jones. Jon Jones has a lot things to iron out before the UFC will even discuss the idea of him making a return. They say actions speak louder than words and nothing Jon Jones ever said has had the same effects as his actions. UFC 192 is in October that will be seven months after Jones was suspended.

The fallout is still coming down.