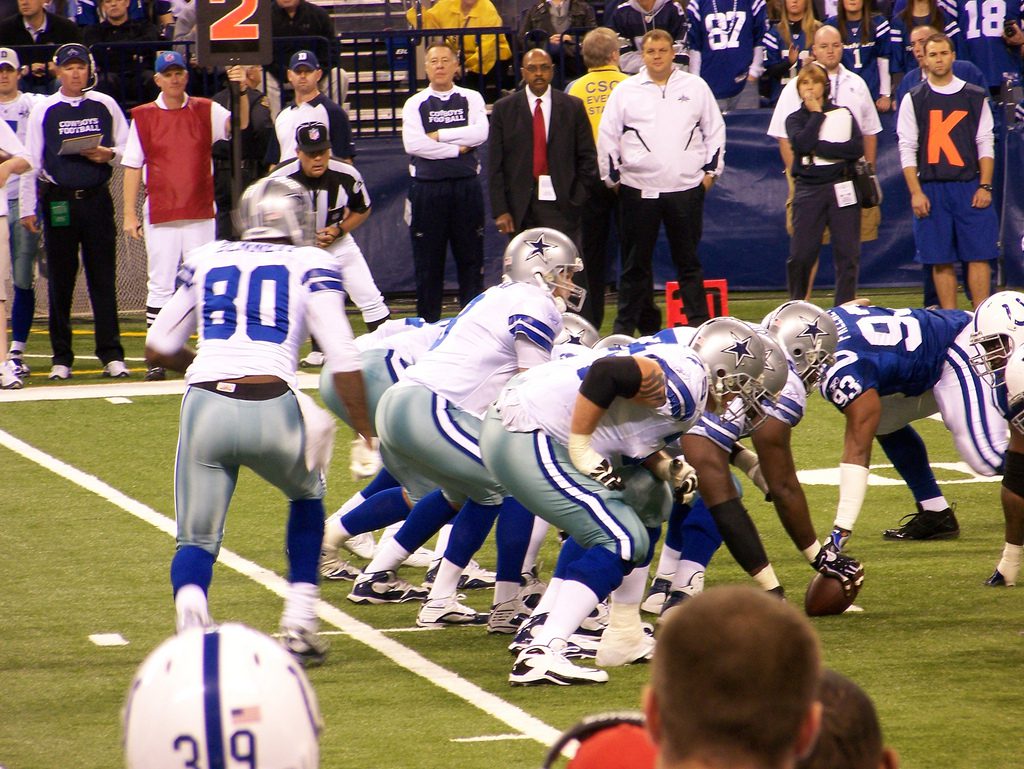 Without a snap being played, it already feels like the 2015 version of the Dallas Cowboys is worthy of some sort of movie being made of their ups and downs. I see it as a dramatic comedy that would follow the human element of a team, with a closing window for some older guard, and the coming of age for some of the younger players along the offensive line. While the defense is an integral part of the story, the offense would be the focus of the film as it features many big-name players like Tony Romo, Dez Bryant, Jason Witten, and the bulk of the offensive line. With that said, I’ll begin working on the screenplay as the year unfolds.

Until then, though, let’s work on the casting for such an epic movie. Remember, this is a dramatic comedy, so I’m hitting up actors from all over the movie landscape.

Tony Romo – Breckin Meyer – The only real problem with this casting choice is that Meyer is on the shorter side. Facially, he fits the dimpled mold of Tony Romo and his playful sarcasm would do well in the movie plot. If Adam Sandler can pull off being a league MVP in The Longest Yard I feel like Meyer can pull off Romo.

Darren McFadden – Michael Jai White – More know for his action roles, White is going to bring some of the drama, and perhaps, maybe a rougher edge to a player that may not even be a feature back. Coming from the Oakland Raiders, you need that type  of personality to do the role justice.

Dez Bryant – Tyrese Gibson – Dez Bryant is considered in NFL circles as a diva wide receiver (though not quite). Gibson is virtually typecast as a diva renegade in the Fast and Furious franchise. Having the physique and attitude of Dez is not something you can learn, you must be born with it.

Terrance Williams – Ashley Walters – How do you cast a selfless secondary receiver? With a selfless secondary actor! He’s not the sort of name actor anyone would even know, but that is what makes him perfect for this part. He’d fill out the background flawlessly and have few speaking lines, which is great considering he’s British.

Cole Beasley – Beck Bennett – I actually met Bennett walking around New York last year. His comedy presence on Saturday Night Live would work well in playing up the role of the diminutive Beasley.

Jason Witten – Alexander Ludwig – You may recognize Ludwig from the first Hunger Games film, or his reoccurring role on the show Vikings. Either way, he’s the right mix of size and silent presence. The one thing is that Ludwig appears so young, and Witten doesn’t so much fit that bill. It’s a good thing for Hollywood makeup.

Tyron Smith – Morris Chestnut – Alright yes, Chestnut is 20-years older than Smith, but it’s all about the look and the presence. Smith is the leader of the O-line because of his play, and Chestnut fits that mold to a tee.

Ronald Leary – Kenan Thompson – Going back to SNL, Thompson is the right kind of build and the right kind of dude. Thompson never seemed to the spotlight on SNL, but it found him at times. As a guy who was overlooked by so many other teams before shining in Dallas, I feel like it’s a good cast choice here.

Travis Frederick – James Corden – While I feel like Corden looks enough like Fredrick to pull this off, the balance of the personality is off a bit. This really only works if you go totally comedy with the role, or have someone else do a voice-over for Corden and ask him to tone down his facial expressions. Maybe growing a giant beard like Travis could help tone down some of his comedic feel as an actor.

Zack Martin – Nick Frost – Another guy who is much older than the kid he’d be portraying, but he nails the look so perfectly. Frost is a Brit best known for roles in Hot Fuzz and Shawn of the Dead. He’d need to work on the voice, but he’d be great in this spot.

Doug Free – Kevin Smith – One of the few guys that would have to cut weight to play an offensive lineman. Smith has the perfect mix of humility and comedy to pull off the role Doug Free perfectly. The journeyman tackle has done a lot for the club over the past several years, and doesn’t seem to take himself too seriously. Sounds like my favorite Mallrat.

Jason Garrett – Damian Lewis – Were there ever a more perfect fit, I’m not sure. Lewis is such a match for Garrett it’s almost scary. The only real stickler here is the voice. The soft drawl of Garrett would be a tough test for the British born Lewis. Given his acting abilities, though, there would be an expectation for him to nail it.