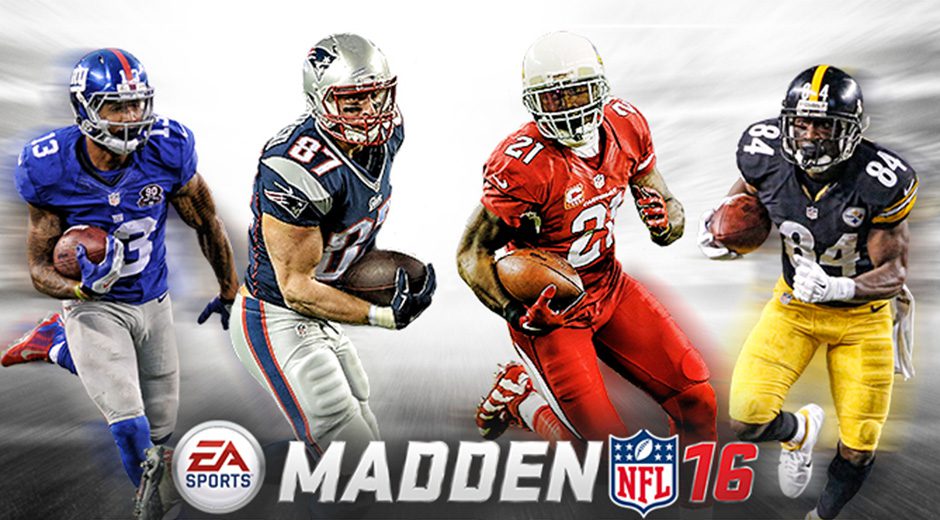 Every year the Madden franchise releases its next record installment with as many new bells and whistles as the brain trust at EA Sports can muster. While much of the changes are based on what the directors and programmers want to see, there is more and more fan feedback being worked into the changes. While Madden NFL 16 does not hit shelves until August 25th, creative director of the game, Rex Dickson, has already been writing and sharing some of the changes fans of the franchise can expect to see. 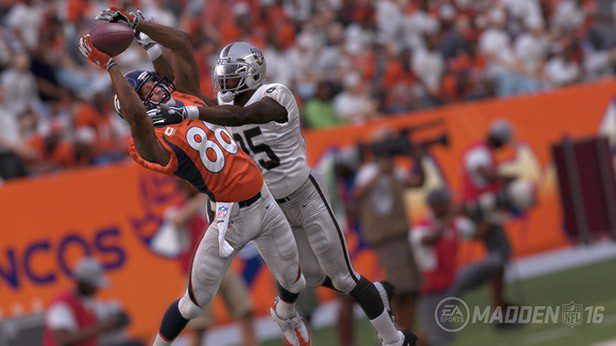 “Air Supremacy” is a term you’re going have to add to your Madden vocabulary for 16. This is the new way that wide receivers and defensive backs interact. A whole new set of user and artificial intelligence (AI) mechanics for playing the ball in the air. This is also rolled into multiplayer catch interaction and provides over 400 two-player catch animations and outcomes. As the Dez Bryant catch from this past year’s playoffs has shown us that there are a multitude of ways a catch can play out. Depending on how exactly this is achieved in game play, this could be an epic invention. 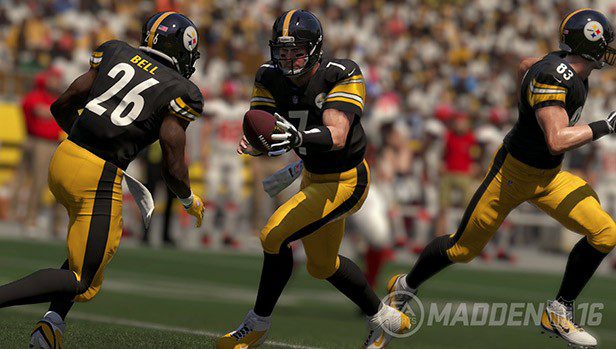 Continuing on with the systemic improvements the quarterback handoff has been updated too. The breakdown of play types with uniquely captured handoffs for varying plays results in hundreds of varying animations. Couple this with a new variety of fake handoffs there is a lot of improvement on all aspects of this initial stage of a run play and for play action, at least in terms of graphics. The idea with the new content is to make the timing tighter between handoff and blocking sequences of the game. 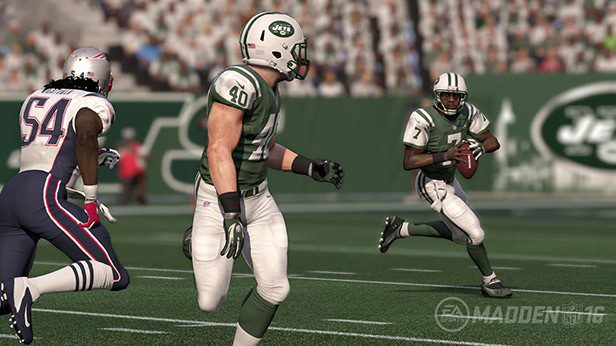 But don’t think that the new scheme is limited to a run play with a running back. The quarterback pocket, scramble and rollout locomotion has all been re-worked. Tapping RT or R2 (depending on your system) allows the quarterback to “roll to pass”. This feature will be particularly function on plays where the quarterback was designed to roll out or bootleg. This allows for greater quarterback accuracy as the QB is not being penalized as if this is a “throw on the run” situation in game play. Scrambling has also been reworked. Players are to hold RT or R2 and the system is now more responsive, allowing you to toggle back and forth between pocket, rollout and scramble. Don’t think that this is something you’ll be able to capitalize on against a computer foe. The AI has been given full functionality of all these features, and players like Cam Newton and Marcus Mariota will be ones to watch for as they are premier runners.

If you think the QB overhaul ends there, then you’re mistaken. The guys at Madden have spent years working on a “Behavior Coordinator” that is meant to impact the computer AI when it comes to situational play of the QB. This will make it tougher for the gamer and draw distinct lines between pocket passers and scrambling

quarterbacks and how they handle circumstances. The QB will play to their strengths, and lean on them as the actual player would in real life (at least that is the thought process). This has been a big player ask of late, and it hasn’t gone forgotten. Even aspects of clock and game management will come into play with the new improvements.

The computer AI is improved for the QB, but show is your passing mechanics, now with the ability to throw jump balls or lower passes toward the feet of your intended receiver. The drop pass has been made more workable as a double tap now executes a pass arc that will go over linebackers and fall before safeties.

Wouldn’t it be a shame if all this work was done and it was the same old play books to work from? The team from EA met with former NFL coach Tom Moore and re-worked their playbooks extensively. The net result is over 600 new plays, including a wealth of team specific plays to choose from.

People who purchase Madden every year will know that last year Madden introduced pass rush and tackling feedback, and it was received well by users. Building on that now the same sort of feature will be applied to passing. Pass feedback will explain why the pass came out the way it did (under pressure, on the run, back foot, etc.). This should help provide the user with context on how the same play or playing in general can be improved. 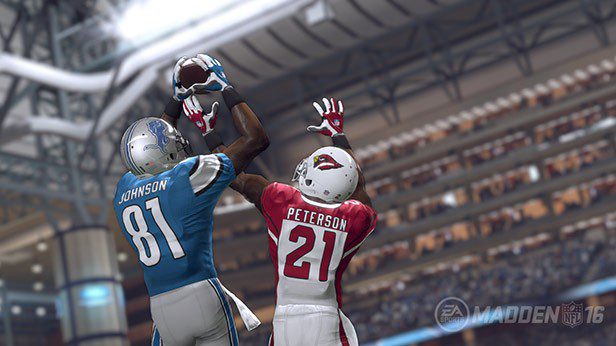 With all the changes, “Air Supremacy” that is going to be the one you notice the most. Previously, the player could only tap the “Catch” button (Y or Triangle). Now there are three different catch types to choose from. Players now hold the catch button as soon as the QB lets loose the pass. Here are the three pass catching options you have. 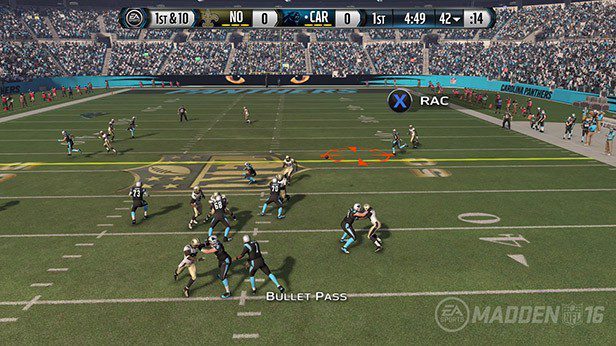 RAC Catch: “The Run After Catch” is a pretty common stat that the NFL usually calls out as Yards After Catch, or YAC. The idea here is that the receiver is catching the ball in space and is looking to make a move even before the ball is in his hands. To do this in the new Madden players will hold the X/Square once the pass is released. Much like in real life there is a higher chance of a drop or a fumble, as players are not focused on the ball. This catch type would also lend itself to interceptions are receivers are playing to space, and not contesting a DB for the ball at the point of the catch. 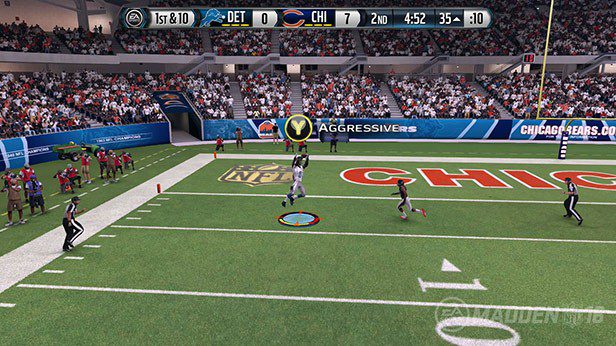 Aggressive Catch: Think of this as a contested catch. Players are going to be going up for the ball, trying to snare it at its highest point, while fighting through some traffic. This is the quintessential essence of a difficult catch in a tight space. Users will hold Y/Triangle once the ball is in the air, and this will be most effective if the quarterback is using the high throw metric. While there is a lower chance of a catch and a high knockdown percentage there are huge advantages of this catch type when you have a receiver like Dez Bryant or Calvin Johnson. 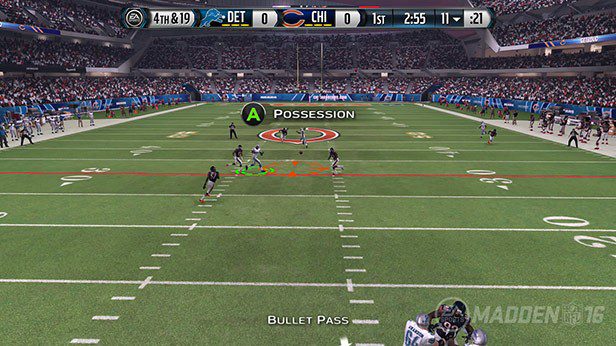 Possession Catch: This is the box out catch. Those of you who watch the Jason Witten or used to watch Tony Gonzalez, these are the sorts of catches that they made a living from. Aside from being a solid catch option in a tight window this particular catch style also helps your receiver get their feet down in bounds during game play. Players will hold the A/X button once the pass in let go. These often will work well with the low throw pass mechanic to players that have a good possession trait. The downside here is that yards after the catch are sacrificed, and many players will go down immediately after, or in the process of making, the catch.

As a result of the new pass types and catch types receivers have now been outfitted with traits that help define what sorts of catches they will look for when they are under AI control. When you’re playing it’s important to be throwing the right routes to the right receivers who posses the right traits. Throwing a contested “aggressive” catch to DeSean Jackson is not going to win you as many games as throwing him an “RAC” route will. This is a critical strategic move to make when you begin to play Madden NFL 16.

These traits measurable are also taken into account with the new Multiplayer Catch System. The system has been worked on for two years by EA and is meant to make the contested catches more interesting and true to life. Players and CPU are able to battle for the ball in the air, while the AI uses the ratings, positioning and throw dynamics to render the appropriate outcome. The system also takes into account things such as double coverage.

To polish this all off, the animators have added hundreds of new animations for receivers and defenders. Things such as hand fighting during route running are now a part of the game experience. Even where the defensive backs line up changes now based on coverage as players can shift from the inside to outside shoulder of receivers as they do in the actual game. The coverage design is what is making this subtle shift, but expect this to make a difference in how you have to play against the CPU.

While I’ve yet to play the game the changes outlined by Mr. Dickson, it seem like every other Madden I’ve ever played, which is to say “just that much better than the one I bought last year”.