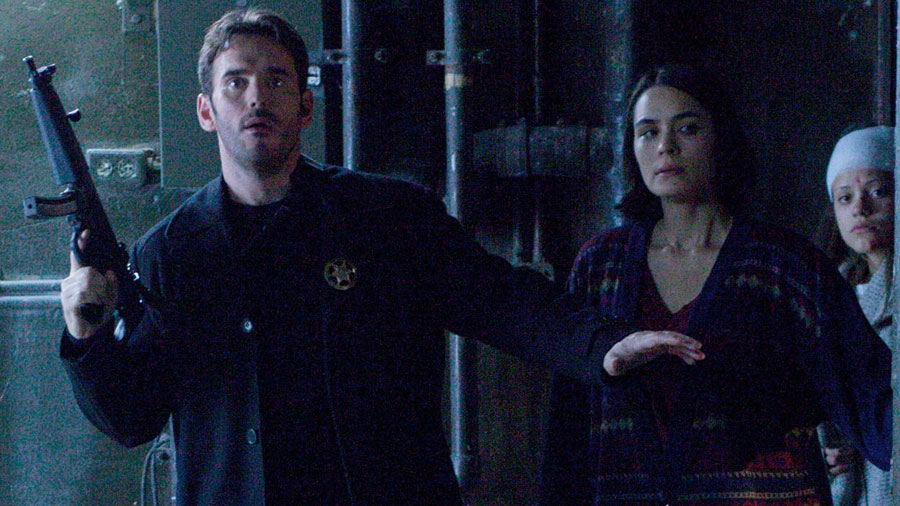 Wayward Pines has presented its audience an odd, intermittently exciting, and overall unfulfilling season of television. Reaching this finale was no simple task. We’ve experienced twists, unexpected deaths, and questionably logical storylines. Nevertheless, Matt Dillon always acted as an enjoyable central figure playing Ethan Burke, and that alone was enough for me to maintain at least a moderate level of interest.

With the finale, the episode begins with Burke and company rallying the troops. We then have Ben opening up to his girlfriend while displaying some of the worst acting skills the season has offered. Here’s an issue that plagued Wayward Pines: Terrence Howard’s brilliant character of Sheriff Pope was killed, Ben’s horribly dull persona was kept alive. Killing off a central figure early and keeping a forgettable individual throughout? Poor decision.

What’s more, Pope was active on the show when the audience had the greatest point of intrigue. We didn’t have many answers. The truth was elusive and Burke was largely wandering aimlessly in search of two missing agents. That unknown element was powerful. Since then, we’ve descended from fascinating intrigue to jumbled confusion.

Pam and Pilcher discuss the future of Wayward Pines. After ideologically disagreeing on the necessary tactics, Pilcher has security take away his own sister. Meanwhile, Theresa and Ben wait with the young Burke’s girlfriend in the hospital as the power goes out. This installment of Wayward Pines quickly established itself as a buildup to a battle. Burke, Kate, and the other town dissenters have emerged while Pilcher and his lackeys stand in opposition. The biggest variable in the equation seems to be the aberrations, a group of creatures who are unleashed to inflict suffering and instill chaos throughout the town.

Can the aberrations be defeated? Pilcher’s game plan isn’t extinction, it’s destruction, because he wants enough humanity and hope left to conduct another experiment, but that future project won’t include most the residents of Wayward Pines. Kate and her automatic weaponry enforce justice on the roads, and I’m excited and let down in equal measure. Sure, the action is tremendous, but seeing Carla Gugino murder genetically superior beasts also represents the show’s fatal error. We’ve descended too far into lunacy, too deep into unchecked madness.

Kate has aberrations on her trail. Walking through an empty store with careful precision, she looks toward the roof. Jumping through the glass and into her presence is one of the beasts, but fear not, Gugino lovers, for the former agent pulverizes the monster into oblivion. Score one for the rebels. Walking a more difficult path seems to be Ben, his girlfriend, and Theresa, burdened by a lack of mobility because of Amy’s poor health. The Wayward Pines beasts nearly eliminate this trio before Burke comes to the rescue.

Burke confronts Mrs. Fisher as the townspeople talk about their fate. The educator believes Pilcher will save everybody, an occurrence the audience knows is bogus. Ben’s honesty makes her crack, turning on Pilcher while embracing the growing public revolution, unless her words of wisdom are based in deceit. For now, Burke and Kate trek forward. Kate plays the doctor role on Theresa because of an injury suffered back at the hospital.

Still finding a moment for father-and-son time, Burke shows Ben how to load and fire a gun. This leads to a Ben apology and an elderly Burke embrace of the youngster. Will the Burke name survive the end game violence of this Wayward Pines finale? It’s machine guns against genetic freaks, revolutionary backlashing against scientific advancements. Take your pick. Joining the Pilcher side of the coin could be the youthful students, a brainwashed core tricked into believing they’re the future. Apparently Pilcher thoroughly stocked them with weaponry in preparation of such an apocalyptic event.

In a sad moment because of Pam’s crossing into more audience friendly territory, Pilcher has his dear sister destroyed. Melissa Leo was a consistently strong figure as Pam all season. A much less sad death occurs off camera, at least one is to assume, and that violence victimizes Mrs. Fisher. She’s frozen by disappointment and probably borderline suicidal after realizing her mental foundation is based on a lie.

Burke and his comrades continue to fight Pilcher’s people and the aberrations. Is this what we as an audience signed up for? What originally drew me to the show was the preview involving Terrence Howard and Matt Dillon when Howard cryptically stated that no one leaves Wayward Pines. As mentioned earlier in this review, we’ve drifted quite a distance away from that early season template. Don’t tell the actors that, however, seeing as how they’ve fully embraced the show’s trajectory.

Ben offers his dad a hand, hoping to bring his father alongside him as they meet up with the others. Burke opts to stay behind, a predictably heroic move that’s been seen in countless shows and movies. Elsewhere, Kate points her gun in Pilcher’s direction. He jumps into a monologue as Burke’s weapon preparation and Ben’s journey are shown. Before Kate can kill the scientist, Pam emerges (WHAT THE ****) and murders her brother. She’s either a clone or that device never actually did anything.

Wayward Pines had countless issues. The plot jumped off a cliff, exploded on the ground, and then rolled off a second cliff. All that said, Burke waiting his death as memories flashed before his eyes, a move that swept away the aberration forces and protected the innocent townspeople, was tragic. Even yet, it was glorious, because it was a Wayward Pines move true to Burke’s character. My only complaint is that Burke’s pondering could have lasted a bit longer. The scene might have felt even stronger even it wasn’t overly quick. Comically, following such a profound scene is Ben leaning over to see the explosion, only to have a falling piece of debris clank him on the head.

Kate and Pam believe in the future. Hooray, there’s hope for humanity. As Ben awakens from his heavy debris-induced slumber, a dolled up Emily greets him. Ben had been under for three years, and the world he enters isn’t what the fatherly Burke had in mind when sacrificing himself. There’s a statue of Pilcher, eerie music glaring in the background, and hopelessly naïve people roaming the streets. The last shot we’re shown is Burke hanging by the neck from a tree with a “DO NOT TRY TO LEAVE” sign. Dam, so much for the Wayward Pines revolution.

To those of you who read my weekly Wayward Pines write-ups, I offer my most sincere thank you. The show wasn’t transcendent or gripping, but it was entertaining enough to justify a following. If you’re interested in continuing to follow my work, check out my ongoing True Detective reviews.