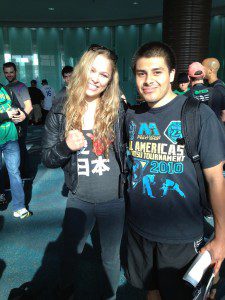 It seems only Bethe Correia is in any doubt about the outcome of her UFC 190 fight with Ronda Rousey.

you’re ever likely to see, with Rousey being roundly backed across the globe to extend her 11-0 win record inside the Octagon.

But Correia is not just ignoring the hype; she’s attacking it. The fighter known as ‘Pitbull’ has claimed Rousey is “focused on movies” and is “not a superhero”, taking digs at the celebrity status Rousey has achieved since her appearances in films like The Expendables 3, Furious 7, and Entourage.

But it was an off-the-cuff comment from Correia that has riled Rousey into a fit of rage that might well determine the way the fight goes. It could be that Correia, by stoking the fires of Rousey’s anger, will turn out to have contributed to her own undoing.

Correia, who only made her professional MMA debut in 2012, swiped at Rousey in her pre-fight comments with a dangerous reference to suicide, saying “I hope she does not kill herself later on”.

Rousey has since responded, making it very clear that she took the comments as a very personal dig at the fact that Rousey’s father committed suicide when she was just eight-years-old.

The intense rivalry between these two undefeated fighters has made for a terrifically exciting fight build-up. Rousey has been provoked by an opponent who she must fight against in front of a partisan Brazilian crowd, and the clash is bound to be an explosive spectacle for anyone ringside, and for the millions who will tune in to view it on television.

But the overwhelming feeling amongst the MMA community is that Rousey will punish Correia for her jibes, and defeat her in some style. Which begs the question, exactly who in the MMA world is a match for Rousey?

The answer in many people’s eyes is Cris ‘Cyborg’ Justino, who has been firing some broadsides of her own in an attempt to land what could be the most-watched fight in women’s MMA history if it happens.

Having signed a UFC deal with Invicta, Justino has been told by UFC President Dana White that she must make 135 pounds in weight in order for a fight against Rousey to happen.

If she does – and it seems likely that she will – there is speculation that a fight between Justino and Rousey would top the 1.6 million record pay-per-view buys that were made ahead of UFC 100. Dana White believes a Rousey-Justino clash would smash that record by bringing in two million buys, and now MMA fans around the world are waiting to see if it will happen.

Justino’s record in MMA is 14-1, and one no contest, but she is relatively untested at bantamweight. However, her reputation as a fierce competitor is well established and, once Rousey has seen off one Brazilian, it seems likely she will face another.