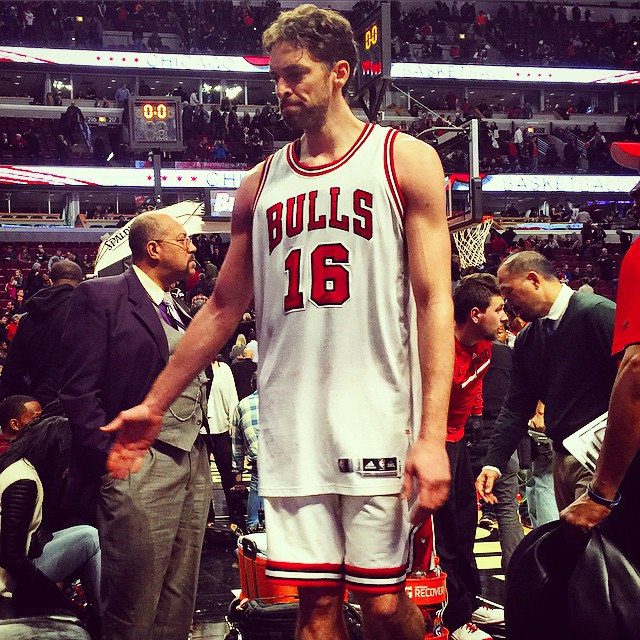 Pau Gasol enters the countdown at 42, the highest of a string of aging bigs who are finding ways to remain effective even when history says that they shouldn’t. A year and a half ago it looked like the Pau Gasol we knew so well — the one who won two titles with the Lakers, the one who helped the Spanish National Team push the United States to the limit twice in the Summer Olympics, the one who was almost universally appreciated for being the consummate professional and one of the most offensively gifted big men in NBA history — was gone.

Watching Gasol toil away on those depressing post-Phil Jackson Lakers teams was a bummer for just about anybody. Whether he was dangling out there as trade bait or being misused/underutilized in the Lakers offense, it didn’t seem fair that Gasol might be playing out the rest of his career on a team that was largely irrelevant with the exception of the city that they played in and the aging star whose dwindling career would always, and rightfully, overshadow Gasol’s career twilight.

When Gasol chose to sign with the Chicago Bulls in the 2014 offseason, the move flew under the radar; partly because a certain someone decided to take his talents from South Beach to Cleveland, but also because based on his recent body of work, it looked like Pau would make only a marginal difference for a team desperate to be a contender.

Clearly Gasol didn’t get the memo that he was supposed to show up in Chicago and play the role of the over the hill vet. For significant chunks of the season Pau was the Bulls best player, and one of the better big men in the entire Eastern Conference. As you can see above, the basic numbers Pau put up this season are impressive whether it’s a 34 year old or a 24 year old that is putting them up, but given Pau’s advanced age they are all the more impressive. Allow me to dig a little deeper:

Per Basketball-Reference, last season Gasol became the 25th player in NBA history to play at least 50 games, average 34 minutes per game and score at least 18 points per game past the age of 34. 21 of the other 25 are already in the Hall of Fame. The other three aside from Gasol are Kobe Bryant, Paul Pierce and Sam Cassell. Sam, what the hell are you doing in there?

It wasn’t just the numbers that impressed. Gasol was more efficient last year after seeing some slippage in his efficiency the prior two tumultuous seasons in LA. Gasol was the fourth best spot up shooter in the NBA, per NBA.com (that’s of all players with at least 100 spot up field goal attempts), but that’s not the only place he got it done. 31 percent of Pau’s shots this year were from 0-3 feet from the rim, per Basketball-Reference, which is the same percentage as in Phil Jackson’s final season coaching the Lakers. Gasol’s paint touches diminished under Mike D’Antoni and Mike Brown, and that’s arguably where he is at his best.

Pau’s season didn’t end how Bulls fans would have hoped it would. Rather than being afforded the luxury of limited minutes thanks to a bolstered frontcourt unit in Chicago, Gasol logged more only 300 fewer regular season minutes than his previous career high. I suppose we should have seen this coming given his now former head coach is notorious for running his players into the ground.

After 78 regular season games of heavy lifting, Pau finally broke down in the Playoffs. A strained hamstring sidelined him for two games against Cleveland in the East Semi’s and left him a complete non-factor in the deciding Game 6.

Thibodeau isn’t in the picture anymore, so it’s entirely possible that under new head coach Fred Hoiberg, maybe the big Spaniard will see his minutes cut and postseason effectiveness increase. That’s the best case scenario for the Bulls at this point. If his minutes can be monitored it’s not far-fetched to believe that Pau can remain an impact player for another few years. He’s a brilliant passer and interior scorer, and with his mid-range touch relocated his career could definitely be extended if he’s taken care of by a coach and protected by a good defensive system.