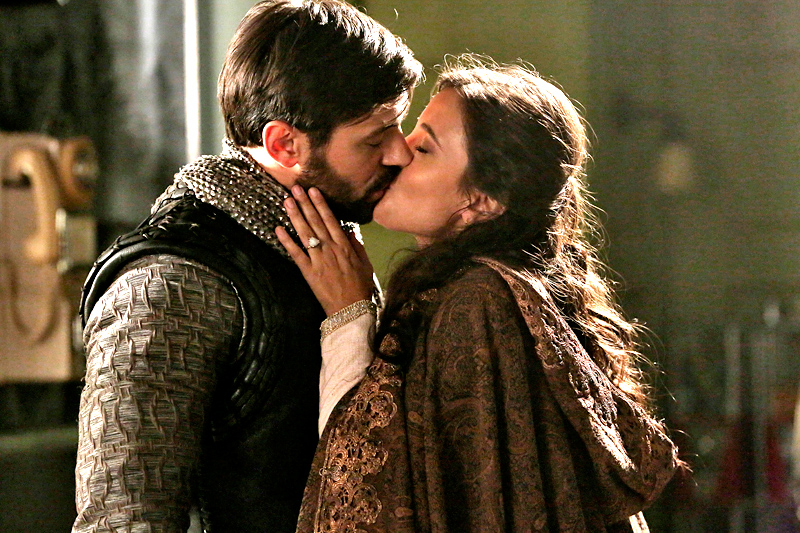 I’ve said it before and I’ll say it again, one of my favorite things about Once Upon a Time is how much smarter the women are than their husbands and male counterparts.

Last week on Once Upon a Time we learned from Lancelot that King Arthur was not to be trusted. During this episode, however, Guinevere was adamant that it was actually the other way around. Needless to say, David and I were both left feeling confused and betrayed.

Mary Margaret, on the other hand, was not confused and remained convinced that they should stay suspicious of Arthur, a stance I wisely decided to agree with. David, however, is a man, and like every other man, refuses to believe that his wife is always right.

I’m not going to outright say that David is naïve and too trusting in Once Upon a Time, because we’ve already got four seasons worth of proof that it’s true. I will, however, apologize to him for the choice words I yelled while he proceeded to act naïve and too trusting. I’ll also say that it didn’t take long to get some concrete proof that King Arthur is, no doubts about it, a giant douche.

Primarily the entire Once Upon a Time episode takes place in Camelot, with time shifting between Camelot of five years ago and Camelot following the arrival of the Storybrook gang. Once Upon a Time always does an amazing job of using flashbacks to intertwine stories together so that any confusion is always resolved. In this case, the flashbacks were used to mirror each other and show exactly how far Arthur is willing to go to get what he wants.

Back in five-years-ago Camelot, Arthur had begun to neglect his wife as he searched for the Dark One’s dagger in an effort to reunite it with Excalibur. Eventually Guinevere grew so frustrated that she gave Arthur an ultimatum —  keep searching for the dagger, or lose her to Lancelot.

Meanwhile, in more present day Camelot, after Mary Margaret finally convinces David of Arthur’s untrustworthiness, the pair lure him into a classic Snow and Charming trap using a fake dagger.

Like the sneaky devil he is, though, Arthur manages to get out of both Once Upon a Time messes by using the Sands of Avalon, a magical powder meant to ‘fix’ the appearance of anything broken. The sands put Guinevere, Mary Margaret, and David under a spell in which they believe Arthur is the victim. See? I told you, evil.

Luckily, we’ve still got Regina around and uncompromised. She’s especially astute when it comes to spotting evil tendencies, maybe even better than Mary Margaret – I mean, Regina does have more experience.

Additionally, we also discovered in this Once Upon a Time episode that Merida, who I had started to think had been relegated to a single episode, has actually been trapped in Arthur’s dungeon all along. While I’m sure that Lancelot, who is Merida’s new cell buddy, will be of some help to Merida, I’m convinced that it’ll be up to Regina and Merida to save Camelot from King Arthur. That is, until it’s thrown into peril again by Emma. But until then it’ll be nice to see some more girl power in action.