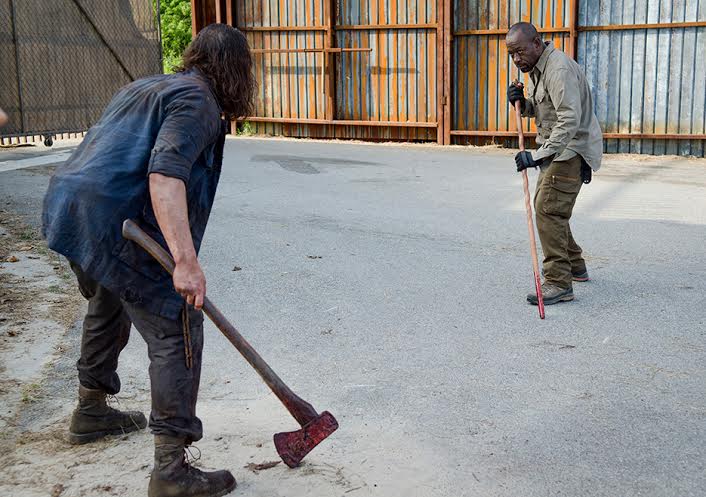 This week’s episode of The Walking Dead has forced me to make a change to my running “Walker Kill Count” that started last week. The second episode of the season focused on what happened in Alexandria while the main group was out playing shepherds with a horde of walkers. Well, it turns out that the Wolves we’ve gotten hints about were finally ready to make an attack on the community. Therefore, the majority of the kills that our characters get are humans rather than walkers. From here on out the “Walker Kill Count” will just be a “Kill Count” to save you any confusion. Without further ado here is where everyone stands after two episodes.

As most of the characters from this list weren’t featured in the episode, their The Walking Dead numbers didn’t change much, but we did see a big jump for Carol who went all rogue bad-ass and killed a bunch of Wolves as well as a couple of walkers. Morgan finally realized his moral code might not be as important as survival, and killed his first person of the season. I’m sure he will be stuck with the same dilemma again in future The Walking Dead episodes so let’s hope he keeps choosing survival.  Despite his annoying morals (who needs them?) I like Morgan and would like him to stay a part of the group.

We didn’t see Abraham in this episode of The Walking Dead either, but it’s safe to say he still had the best mustache.

You know who will never have the best mustache? Carl. He, like me, is cursed with a prepubescent baby face devoid completely of facial hair. We got to see a lot more of Carl this episode, and normally this would be a bad thing, but he seems to have eased up on the annoying teenager role. Hopefully this means he’s stepping up as part of the group, and won’t be doing any more depressed, pudding binge eating.

There is a moment where Carl sees his somewhat girlfriend hanging out with Ron, one of the other teenage boys in Alexandria. He’s also the son of Pete, who Rick murdered last season. Carl seems none too pleased to see the two of them hanging out, and I’m honestly surprised Carl didn’t just walk over and kill Ron. That seems to be how their family solves most of its problems recently.

Carl actually does show flashes he may be carrying the Grimes super-bad-ass gene when he kills one of the Wolves with an assault rifle while protecting his house and Judith. While in the house Carl vows that the Wolves “are going to die. All of them.” Seems like Rick has been giving him some pointers on dramatic one-liners.

The Wolves deciding to attack Alexandria goes unsuccessful, thanks in large part to Carol and Morgan in their own ways. Morgan uses his words to convince the Wolves to leave, while Carol just kills any of them she sees. Both very effective strategies, and a good way to show the different dynamics between Morgan and Rick’s group. This differing dynamic is proving to be a big theme in the season of The Walking Dead so far.

Although everyone is relieved that they are no longer being slaughtered by the Wolves, I fear this relief will be short-lived, as there is a giant horde of walkers heading right for them. Alexandria is definitely in trouble during The Walking Dead, and we can safely assume that everyone’s kill count will be skyrocketing the next couple of episodes.

This episode of The Walking Dead didn’t do too much to advance the story, but it introduced us to just how ruthless the Wolves can be. It is important for the group to have a viable villain other than just walkers to contend with, and the Wolves are going to be more formidable than anyone in the past. This season of The Walking Dead is looking like it will be one of the most dramatic to date. Another main character dying is something we can definitely expect. The Wolves of The Walking Dead are proving to be terrifying, and we can’t expect all of our characters to make it out of this turmoil alive.