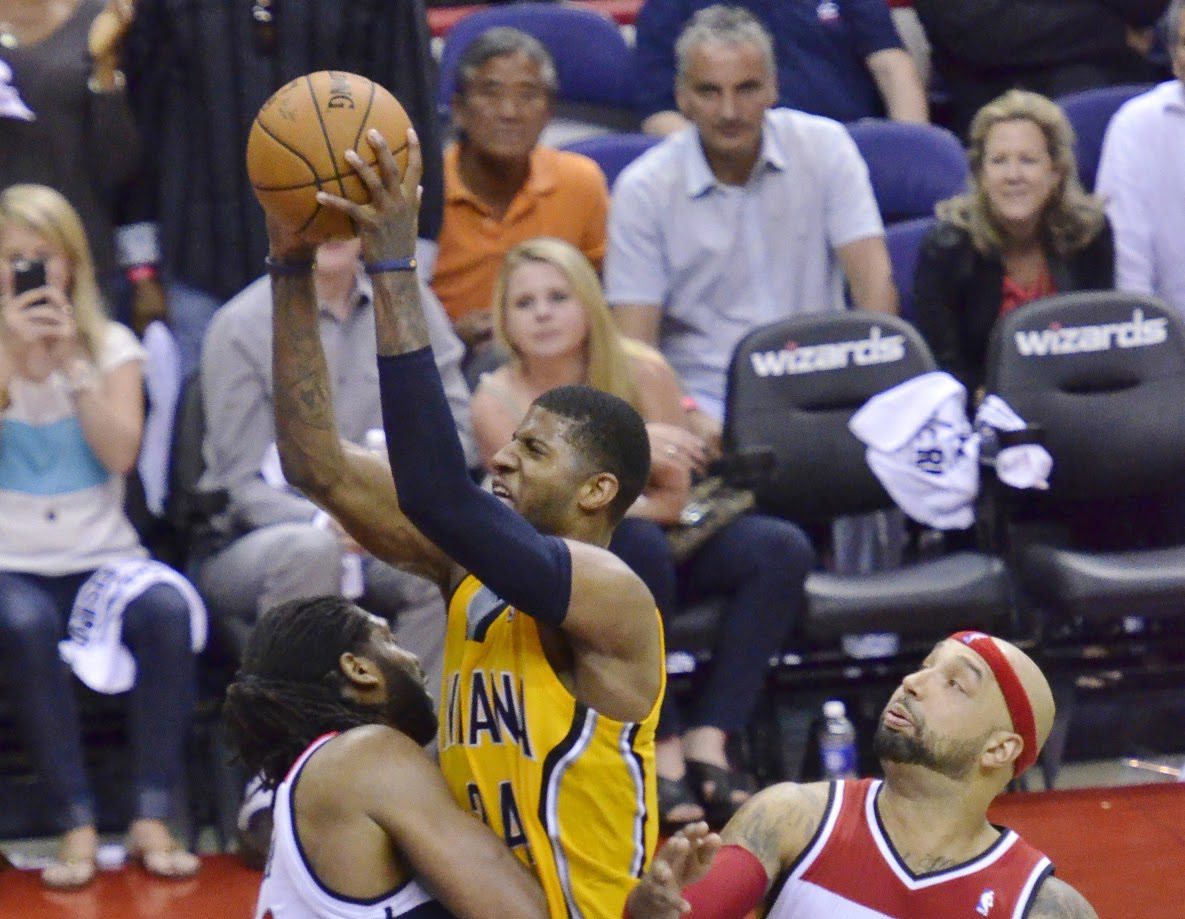 1.What significant moves were made during the offseason?

The biggest losses were Roy Hibbert and David West. The Pacers told Hibbert, in no uncertain terms, to not return to the team. Hibbert opted in to his contract and was promptly traded for a second-round pick to the Los Angeles Lakers. With West, the Pacers attempted to keep him. West in turn opted out of his$12.6 million player option and signed with the San Antonio Spurs for the veteran minimum. It was clear West was done with Indiana, there was nothing the Pacers could have done. The loss of their starting power forward and center definitely hurts the Pacers. It’s a huge blow to lose two quality starters in the offseason.

The biggest signing for the Pacers was Monta Ellis. The former Dallas Mavericks star agreed to a four-year, $44 million dollar deal with Indiana in the offseason. This is absolutely huge for the Pacers. Even with Hibbert and West, scoring was a little hard to come by. Paul George handled the bulk of scoring and distributing. After West left and Roy was traded, the Pacers needed scoring immediately. Monta Ellis brings that. He’s a huge scorer who has a reputation of lighting games up. He’s got a solid jumper, and his slashing play of style will open up the Pacers offense for easy jumpers. With George Hill as the slow it down halfcourt guard, and Ellis as the speed it up seven seconds or less guard, the Pacers have different options on offense. This is huge for them. Being able to adjust offenses makes good teams great. With Monta Ellis, the Pacers add much needed scoring and a whole new dimension to their offense.

Finally, the Pacers added quality backup players on cheap contracts. Indiana signed Jordan Hill after a solid year with the Lakers. He brings depth to the roster and should serve as backup center this year. The Pacers also re-signed Rodney Stuckey to a three-year, 21 million deal. Stuckey brings scoring off the bench and can help mentor the young players on the roster. Joseph Young, the new rookie point guard, plays like Stuckey and it should help him having Rodney around.

2.What are the team’s biggest strengths?

The Pacers don’t really have any glaring strengths. It’s disheartening to see from one of the former best defensive teams in the league. Hibbert and West were the heart of that defense. With them gone, that defensive identity is missing. That will be a challenge for the Pacers in the upcoming season. Indiana needs to find their identity and they won’t be successful until then. Even if there isn’t one particular strength that stands out, offensive firepower is probably their best bet. With Paul George and Monta Ellis, they can explode for points very quickly. Both George and Ellis can take over a game in an instant. It will be fun to watch the Pacers this year simply because of these two.

3.What are the team’s biggest weaknesses?

The Pacers will able to score this year, the issue is defense. They have too many new pieces and inexperienced players to expect any sort of defensive consistency. Paul George can defend, but he will playing out of position more than he would like. His defensive strengths are his length and quickness on the perimeter, not his low-post defense and rebounding. Monta Ellis has always been a below average defensive player. George Hill is solid, but he’s never been a guy that can take on the opposing team’s best player.  Ian Mahinmi is a good shot blocker, but his footwork and quickness is sub-par, especially when teams play small against the Pacers.

The rest of the team, particularly the rookies, will struggle defensively. Myles Turner and Joseph Young will undergo the usual rookie curve on the defensive end. Glenn Robinson III has shown progress, but he will struggle as well. The bench unit should be able to hold their own for the most part as the defensive struggles will be mostly with the starting unit. The Pacers should have no issues putting the ball in the basket, their weakness will be stopping the ball from going in on the other end.

4.What are the goals for this team?

A few years ago, the Pacers were the top of the East. Not to mention, they were the No. 1 seed in the playoffs two years ago. A gruesome Paul George injury and roster turnover resulted in them falling from those lofty heights, but bounceback year is expected from them. It might not translate to a whole lot of wins, but this year is important for the core, rookies, and new roster additions to come together and form their identity. A hopeful prediction is the seventh or eighth seed in the playoffs. Just don’t expect a deep playoff run.

5.What to do about the lack of big man?

A big issue with the Pacers’ current roster is the lack of a true starting caliber center and power forward. After Paul George (who is better suited to play small forward), Jordan Hill, and Myles Turner (?), the Pacers don’t have many options. Ian Mahinmi, former backup to Roy Hibbert, will take over the bulk of offense and defense at the center position. He can rebound and defend fairly well, it really comes down to his offense. He’s shown glimpses of an improved post game. In the limited preseason sample size,  Mahinmi has scored nearly nine points a game. He’s had some range with his jumper, and has recently unveiled a new jump hook. A lot of the Pacers success lies with his contribution. Indiana can be multidimensional with a solid center in their lineup. It provided Frank Vogel with some flexibility to work the offense. Ian Mahinmi is important because he has thrust into a big role this year. If the Pacers get consistent play from him, the depth in the front court will look a whole lot better. If not, the Paces might need to shake things up.