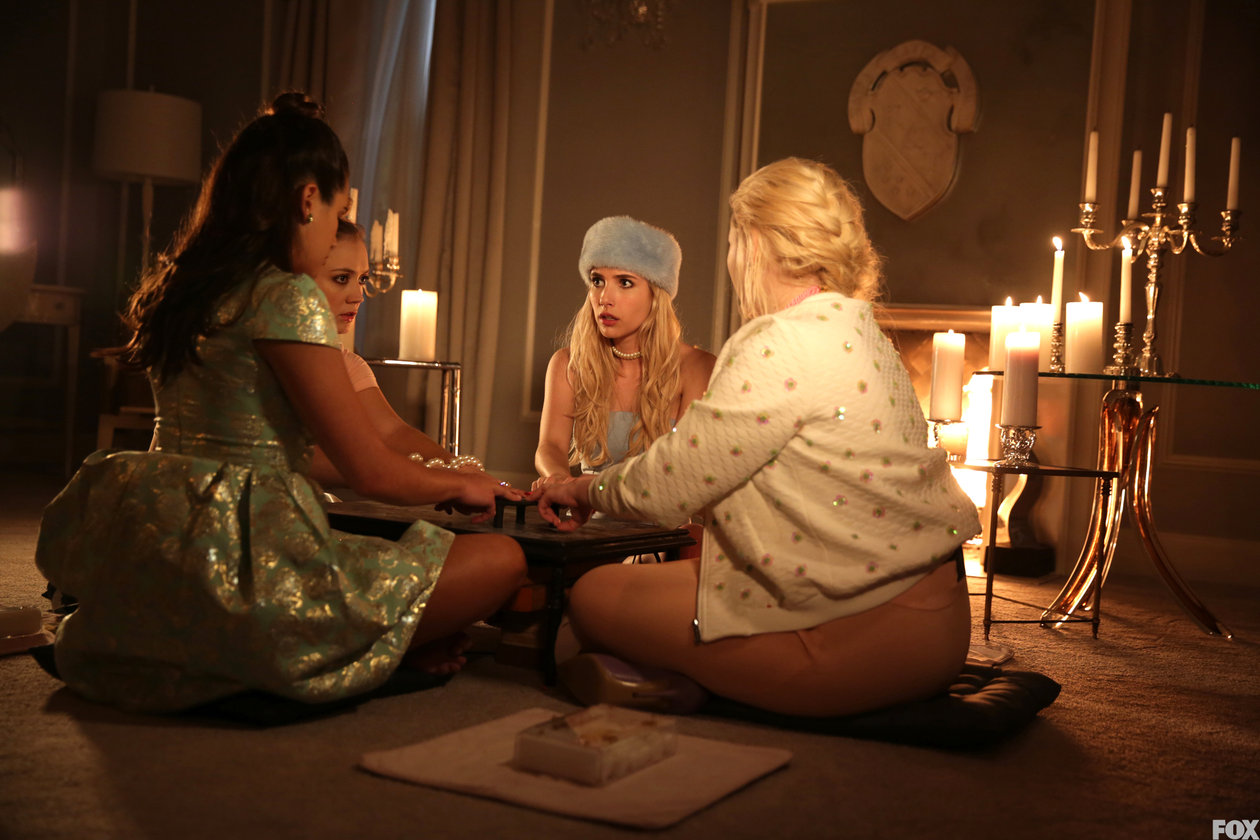 If you’re like me, you spent last Tuesday from 9 to 10 pm moping around your house, mourning the loss of a Scream Queens episode to the World Series. Thankfully, last night’s installment had enough mystery and clues that it (almost) made up for last week’s lack of furry coats and murder.

In a way of apology the writers brought back Daniel Boneta’s scary good Matthew McConaughey impression, as well as another Nancy Drew reference done by Emma Roberts. Roberts starred as Nancy Drew in 2007, for those of you who blocked that movie out. Detective Incompetence, real name Chisolm, also returns with great lines such as, “and I guess all that killing, and dismembering, and pretending that it wasn’t her made her hungry, but not that hungry.” What a great observation.

The most anticipated return this Scream Queens episode, however, was that of Ariana Grande’s. While I could have survived without another cameo, Grande has a giant fan base, which I’m sure was dying for another glimpse at her, dead or alive. Chanel Number Two came back from the grave as a ghost (probably?) to apologize to Chanel and also warn her that the other Chanels were planning to murder her.

Despite her monotonous whisper, Grande actually deadpanned her funny bits about Hell and its other inhabitants effectively. Her apology and attempted sincerity, however, were another story. But it was a funny enough scene, and good closure for Ariana Grande fans who’d expected more screen time from their favorite donut-licker.

Now, let’s talk about the important stuff: who the Red Devil can be and who it definitely isn’t. Let’s start with Gigi and the hints she gives us about other possible suspects.

Gigi: It was confirmed this episode that Gigi has never donned the Red Devil costume; she’s just their ringleader. She does, however, call one of the Devils – the one that kidnapped Zayday – he, so we know for sure one of her minions are male. She gave us another two hints during her phone conversation when she said, “yeah I used to know and love someone by that name,” and then when she hung up and told Wes that it was just “family drama.” Notice that she doesn’t say that she was in love with the person on the phone, just that she loved them. This makes me think that she’s talking to the bathtub baby on the phone, someone who, as the Hag on Shady Lane, she most likely raised as her own child. So that would mean that the second Devil we’re looking for is a female in her 20’s.

Dean Munsch: We also know now that the Dean is not the Red Devil. She did kill her ex husband and then frame Feather for it, so we know she’s bat shit crazy. But it’s safe to say that she’s not the Red Devil, especially because Gigi was working too hard to make her seem guilty. She’s definitely a murderer – just not THAT murderer.

Feather: Poor, sweet, weird, Feather. The least murderous on this list, but also the only one who happens to be locked up. I wonder what will happen to her when it’s revealed that she’s not the person behind the Red Devil mask. Will they still think she’s guilty of murdering Steven, or will they go looking at Dean Munsch again?

Pete: My boyfriend was adamant this Scream Queens episode that Pete was the murderer. While this sounds like crazy talk, there are some good hints that this could be true. First and most suspicious, Pete had the Red Devil costume. He’s also been suspicious up until now, especially last episode when he was too busy studying to go to the slumber party, but as soon as it was over he was free. And finally, this episode he says that the sight of blood makes him “a little faint” — that sounds like a Scream Queens cover up if I’ve ever heard one.

Boone: So, given that my assumption that the Red Devils are a boy and a girl (see above), I may have to rethink my Boone theory in Scream Queens. We already know that Boone is gay – unless he’s been faking his love for Chad this whole time. The male Devil had some sort of crush on Zayday, which is the only reason he kept her alive. So, that effectively takes Boone out of the suspect lineup. Now, that’s not to say he isn’t crazy suspicious and possibly working in line with Gigi and the Devils.

Chanel: I’m not saying that we shouldn’t remain suspicious of Chanel Number One – she is rather heartless if that eulogy for Number Two was any indication. I am, however, saying that it’s looking less like Chanel is the Red Devil. This episode it looked like Number Two was outing Chanel as the murderer when they contacted her through a Ouija board, but there’s more evidence that points to her just being a bitch. Chanel, after all, has been targeted in Scream Queens by the Devil, and while this could be a cover up, I choose to believe it’s not. Number Two’s ghost also apologized for saying that Chanel was the murderer and admitted she wasn’t, and with all the other crazy shit that happens on Scream Queens, why can’t we choose to believe a ghost?

I know I’ve said before that it seemed like Scream Queens was rushing its answers but, despite episode five, the pace has been well thought out. Next week we’ll be finding out more about the creepy painting lady, as well as the bathtub baby. It’s effective how clever Scream Queens can be sometimes, for example, Dean Munsch’s invitation to have Grace go by her office next week to talk about the bathtub baby. She literally means next week. HA. Another great example is every time that Wes has ended his class by saying, “see you next Tuesday.” Hopefully they keep these sneaky lines coming.