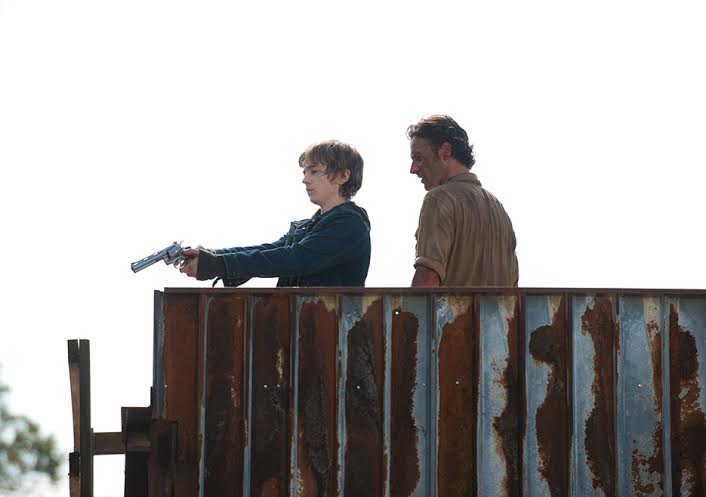 This week’s episode of The Walking Dead got us back into Alexandria and didn’t focus on any one character in particular. I wouldn’t have minded a two hour episode focusing on WHERE THE HELL GLENN IS. We’ll talk more about that later, though.

This episode was relatively tame when it came to walker killing, and the only person I’m keeping track of to get a kill was Rick. Here’s the count after five The Walking Dead episodes:

See? No one even moved any positions this week. Poor Daryl.

The “where the hell is Daryl?” question is almost as relevant as the Glenn one, but I have faith we will get a big helping of our favorite squirrel-eater soon enough. Yes, I know I’ve said that before.

This week The Walking Dead focused a great deal on the residents of Alexandria who have been there since the beginning. This helped me to determine that 90 percent of the inhabitants of Alexandria suck. First up on my roast of Alexandria will be Spencer, Deanna’s son.  He’s always been a bit annoying, but it looked like he was really stepping up as a leader this The Walking Dead episode when he stopped the other annoying Alexandrians from raiding the food pantry because they’re all scared.

However, he makes a quick turn around and shows his true colors by just stealing a bunch for himself and getting super drunk. That’s just what we need, another alcoholic running around. I’m going to make the easy prediction that his drinking problem is going to get him killed by a walker or by Rick. My money is on the latter, though.

Next up on The Walking Dead roast is Ron, Jessie’s son and Carl’s angsty teenage archenemy. He’s still not over the whole Rick killing his dad thing, which I GUESS is understandable, even though his dad was a dick and deserved it. After Carl makes him look like the little baby he is during their tussle, Ron shows that he is just as much of a dick as his dad before him.

One of the Alexandria characters I’m still on the fence about is Deanna. I used to like her, but after the death of her husband she just isn’t holding it together. While this is to be expected when you lose the love of your life, she has totally gone off the deep end. She goes around banging on the fence at the walkers for no apparent reason.  You have to be stronger than that when you’re the leader of a post-apocalyptic community. That’s likely why she’s handing over the reigns to Rick so he can start a brand new “Ricktatorship.”

Finally we can get to some characters in Alexandria that don’t suck. First, there is Denise, our new doctor on The Walking Dead. She is part of an apparent budding new lesbian couple with Tara. I love that a show as popular as The Walking Dead isn’t afraid to trail blaze a little every now and again.

I would actually like to take a second to talk about how awesome the first scene is between Denise and Tara. I’m talking about the scene where Denise gets frustrated with Gray’s Anatomy (the book, not the show) and slides it across the floor, only to have Tara open the door at the perfect moment to stop it with her foot. Are you kidding me? Do you know how many tries it had to have taken them to get that right? I’m thinking multiple.  I wanted to find the scene on YouTube because it’s that good, but unfortunately I was not able to procure one. Go back and re-watch that scene from The Walking Dead if you can, they deserve it.

Alright, let’s get back on track. Another Alexandrian I like is Jessie, despite the rest of her family sucking (even her youngest son who’s scared of the downstairs of his own house). She’s learning that to survive in this world she has to do anything necessary. She even has the best quote of this The Walking Dead episode, “If we don’t fight, we die.” This is said while she is holding a mini pep-rally for her neighbors. This little speech is also what inspires Rick to swing by and put the old Grimes charm to work again. This time it works and it looks like these two lovebirds might be officially going steady.

Speaking of couples, the best couple on The Walking Dead is still separated. I’m of course talking about Glenn and Maggie. Have I mentioned this upsets me? Well, it does, and Maggie does a piss poor job of trying to find Glenn this episode. She crawls through some sewers only to get discouraged by a measly horde of walkers. NOTHING would stop me from finding my one true, pizza delivery boy, love. The big reveal this installment of The Walking Dead is that Maggie is preggo, which is shocking, but my girlfriend called it at the beginning of the season, so I wasn’t as surprised as some.

I’m definitely under the impression that Glenn is still alive now, because they put too much emphasis on his and Maggie’s relationship this episode of The Walking Dead for him to just be found dead somewhere. And it’s not like they can have him show up as a walker à la Sophia in season 2 of The Walking Dead; it’s already been done.

I’m going to end this review with a little quote from Maggie talking about Glenn: “I just want to see his face.” Don’t we all, Maggie, don’t we all…