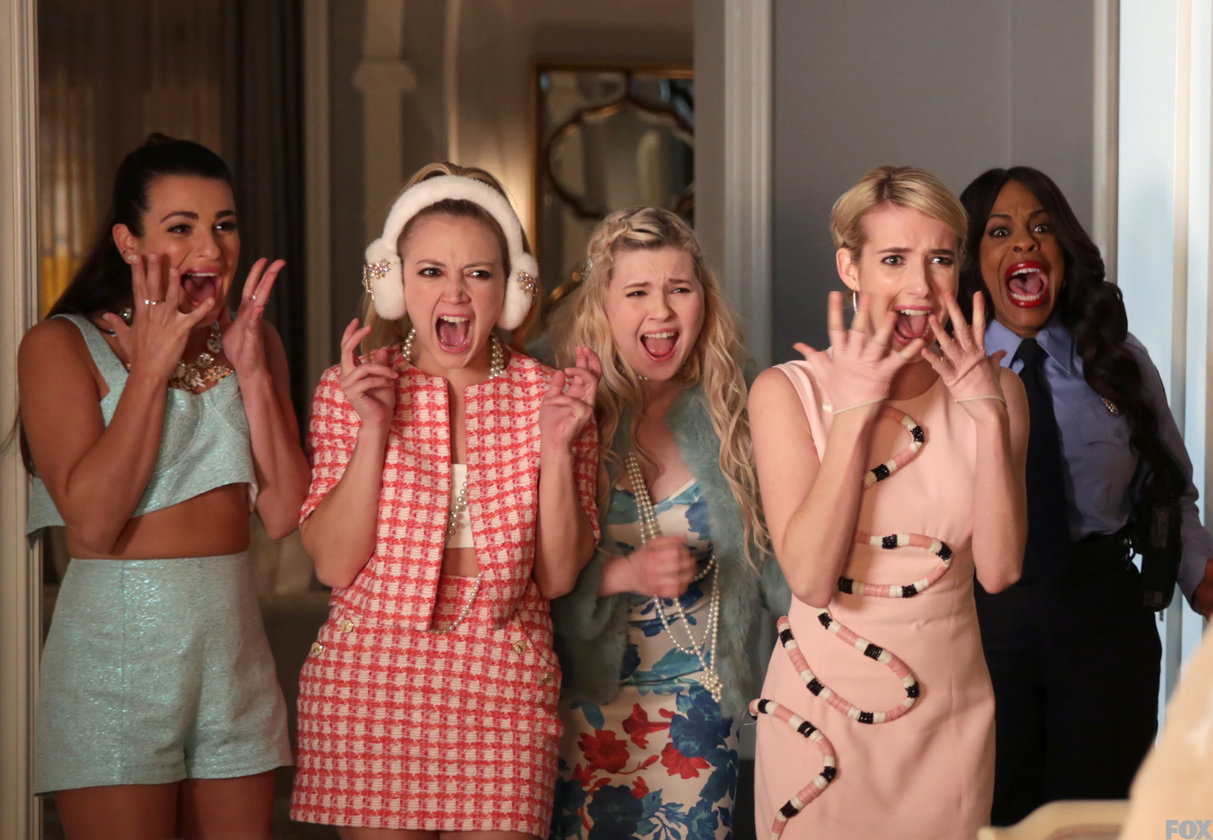 Just when I thought everything had been figured out last week… Last night’s episode of Scream Queens put the nail in the coffin (sorry, Jennifer) for multiple theories. It also threw me through a loop with others.

First off, let’s talk about who the Red Devil is (most likely) definitely not. This episode Chanel Number One made it her mission to prove that Zayday and Grace were behind the Red Devil killings, and the writers of Scream Queens did a fair job making viewers suspicious as well. There were a few moments in particular when people that Zayday and Grace threatened ended up dead or almost dead exactly one scene later.

This aspect of the show made it seem possible, but the likelihood remains a tiny chance. The writers were almost trying too hard to make the girls seem shady, and in my long career of reading mystery novels, the person it seems obvious to be is almost never the killer. So I’m crossing those two off my Scream Queens list for now.

Next up is Wes. Grace made an excellent point this episode of Scream Queens that surprisingly didn’t occur to me before. Gigi and Grace’s mom must have known each other – they were in Kappa together at the same time – which means Wes and Gigi must have known each other as well. While this probably just makes Gigi a super creepy babynapper AND a stalker with a longtime crush, it also doesn’t look good for Wes.

Wes confirms his sketchiness by glowering into a mirror, as most murderers do. My boyfriend called him being the Red Devil the first episode, and I don’t want to hear about how he was right and I was wrong, so I deeply hope it was just a trick from the writers to throw us off the scent.

Luckily, we did, however, get some assurance this episode of Scream Queens that Boone is the killer when he, you know, admits it during a phone call to the other Red Devil. It was great to finally have Nick Jonas back, and I’m even more excited to see him return next week sans “Wockeen Pheonix” disguise. I’m also going to go ahead and make the prediction that Boone was the boy bathtub baby and that the other Devil is his twin.

Oh yeah. THERE WERE TWO BATHTUB BABIES. Grace and Pete go back to the asylum and talk to “Picasso,” the creepy artist from last week, and she shows them a painting of Gigi with two babies. That’s TWO babies, not one! My guess as of right now, since we now know for sure that Grace isn’t one of them, is that Chanel Number Five is the girl baby. There’s no evidence besides the weird fondling of her earmuffs she did this episode, but that strange moment had to mean something, right?

This episode of Scream Queens was enjoyable, but not one of my favorites. The best scene was at the beginning when Dean Munsch gets a visit from the Devils (and Supreme Court Justice Antonin Scalia). I had read that Scream Queens would be getting a Psycho scene, and was especially pleased to have it turned around so that Dean Munsch saw it coming and was able to defend herself.

Jamie Lee Curtis was such a bad ass in that scene, especially when she starts yelling at Scalia that “the homosexual agenda is not destructive to the fabric of American society” and “the affordable care act does not require people to eat broccoli.” I love how over the top the acting is, because the characters are over the top. And while it can seem like poor acting to some, the fact that these actors are able to say and do every new ridiculous thing the writers come up with speaks to their skills.

Beyond the scene being hilarious and proof that Jamie Lee Curtis is amazing, it raised a few good questions. Why did Dean Munsch not take the mask off the first Devil she took down? That just seems like Scooby Doo 101. Why do the Devils and Justice Scalia just leave after getting a beat down from Munsch? They don’t really seem like the kind of people who just give up halfway through a murder. And finally, why did Gigi not have any bruises on her face following the attack? We see Dean Munsch punch her quite a few times while she’s still wearing the Scalia mask, so shouldn’t there be evidence that it happened?

But alas, those are simple questions we’ll probably never get answers to. So, if you’ll excuse me, I have to go get ready for my night of 1000 compliments. Hopefully my boyfriend is better with the compliments than Chad.