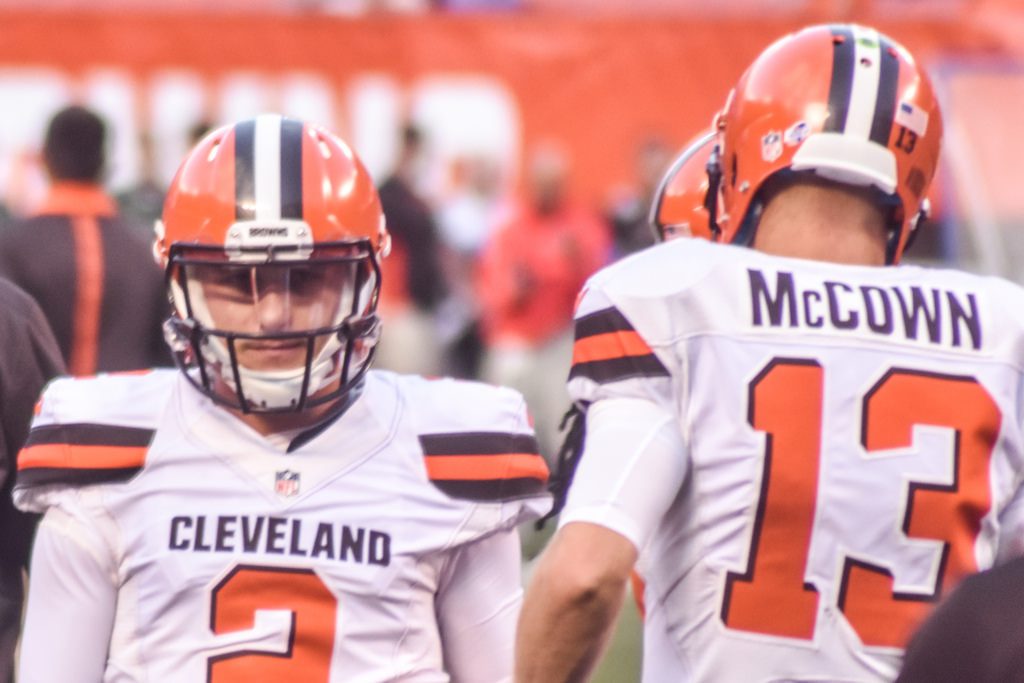 I had a little bit of downtime the other day, a nice little change of pace from the previous three months where I was working on my 4th annual Top 50 NBA Players list (which you can check out right here!) for a multitude of hours each day, so I decided to dig into my personal archives and see if I could find anything noteworthy. I stumbled across my NFL picks from last year and I noticed that last year heading into Week 10 I was doing slightly better than I am now.

Now you should know that there are a few things in life I take pride in. I take pride in my skills in all racket sports. I could have been an all-world tennis player if I ever played Tennis aside from in gym class. I take pride in my ability to write more compelling storylines for WWE than you see weekly on your television. About three months ago I applied to be a lead writer for WWE despite the fact that I have zero of the ten years of television production necessary to land that position … unfortunately I haven’t heard back from them yet. Lastly, I take pride in using my knowledge of the NFL and NBA to make accurate predictions for each of them. Naturally, when I saw I wasn’t doing as well as I was last year, I wasn’t pleased.

So it’s time to get back to basics, and by that I mean it’s time I really think about the fundamental rules in play for picking each of these games and block out all of the other background noise.

An easy play here would be to say Take The Home Team in an Even Match-Up on a Short Week, but I dug a little deeper and found that home teams are only 5-4 on Thursday Night Games so far this year. Instead, I looked at Don’t Forget To Consider Revenge Game (i.e. Rex Ryan returning to New York) and Pick the Team With The Less Shaky Quarterback Situation (I trust the rejuvenated Tyrod Taylor more than I do Ryan Fitzpatrick, playing with a dinged up digit) and decided that those were two legitimate reasons to take the Bills. Also, a Bills win goes a long way in the inevitable December torture of all of my Buffalonian friends.
GREEN BAY over Detroit

This one is simple friends: not only am I running with Pick the Better Team When They’re Playing at Home; I’m picking a borderline anxious Packers team that is suddenly battling the Minnesota Vikings for the NFC North crown. The Packers are going to win this game by a lot of points, for a variety of reasons, but mainly because A Desperate Team is a Dangerous Team (I covered this one) and November Isn’t Too Early To Start Tanking. The Lions are the lone one-win team in the league, giving them pole position for the #1 pick in next year’s draft. That is a precious commodity, and much more important than a road win against Green Bay that will really do more harm than good.

All signs and rules point to the Buccaneers grabbing a victory over dem Cowboys this week. There are the obvious rules like If a Team Has Lost Six Straight Games, There’s Probably a Good Reason Behind It … Some less obvious, and possibly not realistic, like Don’t Pick Teams With Bad Karma (Mainly brought about by the Greg Hardy situation, and compounded with a steady stream of injuries on both sides of the ball) … And then there are other signs that aren’t being played up nearly enough even though it’s the one picking rule we should be looking at, which is Some Teams Might Just Stink Without Their Starting Quarterbacks. The Dallas Cowboys are 0-6 without Tony Romo, and at this point in his career that should be a surprise to literally nobody who has actually been paying attention.

Last week I overlooked the all-too-predictable Pick a Team a Week After They Fire Their Incompetent Head Coach play with Tennessee, and I never will again because it’s as close to a guaranteed win as there is in the NFL. The appeal of Tennessee is worn off a little bit this week. Their offense looked solid enough last week against New Orleans, but the University of Tennessee offense could have a good showing against the Saints D too.

In this one I’m running with Don’t Pick Against an Undefeated Team Unless They Might Not Be Better Than Their Opponent, or if They Are In A Trap Game. A little wordy, I know, but the Panthers are clearly better than the Titans and next week they’ve got Washington, so a trap game isn’t in the cards. A letdown game might be an option, but ultimately I feel comfortable enough backing Carolina on the road with an undefeated season still in play.

A little known rule in picking NFL games: The Chicago Bears Season Will Always Go The Exact Opposite Way Sonny Giuliano Wants It To. At this point, I’m rooting for the Bears to go winless the rest of the year and snag a top three pick in the NFL Draft. You best believe they’re going to win their next five games and then lose their final three to go 8-8. And not that this means anything, but the Bears could easily be 5-3 right now and my outlook would be totally different. They should’ve beat the Lions in Detroit, and they could’ve very easily been on the right side of a three point game against Minnesota back in Week 8. Instead they’re 3-5 and I’m stuck doing this weird dance where I’m trying to decide whether I want them to win or lose. Being a sports fan sucks sometimes.

Hopefully we don’t have too many college football fans out there who were clamoring for the hardly-anticipated rematch of the 2013 Cotton Bowl showdown between Johnny Manziel and Landry Jones, because it’s likely not going to be happening. If you’re looking for someone to blame, send all hate mail to the possibly inept Cleveland Browns coaching staff, who won’t just play Manziel for the rest of the year even though we know with absolute certainty that:

A) The Browns aren’t a Playoff team whether it’s Manziel, Josh McCown, Luke McCown, Luke Wilson, Russell Wilson, Bill Russell, or Bill Simmons starting at Quarterback (You might say that I took that too far, but I say if I can find a way to include Johnny Manziel, Bill Russell and either of Hollywood’s Wilson brothers in one sentence, then I’m a winner).

B) Josh McCown is 36 years old, and that disqualifies him as being almost anything “of the future” unless we’re talking about a future President of the United States.

C) By playing Manziel, you at least know what you have with him, and if he sucks (he’ll most likely suck) then you consider drafting a QB with a top five pick in the 2016 NFL Draft.

This brings me to my point: for this one, just take the Steelers and trust that you should Almost Always Pick Against a Bad Quarterback/Bad Coach Combo. Even though there is no reason to believe that Landry Jones is reliable, you can at least feel confident in the Steelers coaching staff and playmakers.

An absolutely made-up, not-even-a-little-bit-plausible rule I just came up with: If You Can Get 500-1 Odds That a Team Might Win The Super Bowl and You Start To Think Whether You Should Put $10 On It, You Probably Have to Pick Them to Win Every Game From Here On Out. It’s crazy, yes, but the Ravens aren’t mathematically eliminated from the Playoffs, and if they win this week and a few other things break right, they could only be a game and a half out of a Wild Card spot with seven games left to play. Just sayin’.

Is Pick Against a Possibly Concussed Quarterback a rule anyone else has thrown out there before, or am I the first one? I hope I’m the first one, and I hope (in my Berman voice) the Raiders, get this win on Sunday. Semi-related: is this our first intra-conference loser leaves town game of the season? I’m not sure if it’s the first one, but it definitely feels like one. With the Bills and Seahawks surging in the AFC and NFC respectively, the loser of Oakland/Minnesota is suddenly not feeling too comfortable with their position in the conference.

More on this one in my Super Bowl 50 preview. Just know that I picked New England in this one because the Giants Need One More Loss to Throw Everyone Off of Their Scent, and yes, that is a rule to consider when picking football games.

Andy Reid is 14-2 after a bye week, and that’s almost enough to be a bonafide clear-cut rule. Instead I’ll go with one that feels a little safer in this situation: Remember That The Bounce Back Game is a Real Thing. Denver got their lone loss of the season in Indianapolis last week, and heading back home it feels like they’re primed for a bounce back. Also, Peyton Manning is like three yards away from surpassing Brett Favre as the all-time leading passer in NFL history, and I’m fairly certain nobody has ever lost in a game when they broke a record of that magnitude. Then again, I did no research to back that statement up.

It’s Seattle at Home in a Primetime Game, and there really isn’t any other reason I can think of. If they can’t get it done here then we can officially cross them off as a Super Bowl contender, and begin to firmly believe in the Arizona Cardinals. This, friends, is a high stakes football game.

There are three basic rules of picking NFL games that make me worried about picking the undefeated Cincinnati Bengals on Monday Night Football. First of all, the Bengals are visiting the NFC West leading Arizona Cardinals next week, which means this weeks game against the Texans is a textbook Trap Game, and for all of the rules I’ve made up in this column, we all know that the trap game is a real thing. Second, there’s the rule that Andy Dalton Will Eventually Have One of His Crapping The Bed Games, and we have yet to see a full-fledged implosion yet. Third, there’s the aforementioned A Desperate Team is a Dangerous Team which now is relevant in this particular contest because the Houston Texans have an opportunity to gain on the Indianapolis Colts in the AFC South since Andrew Luck might be out for over one month.

But as promised, I wanted to sort through all of the garbage and just focus on what mattered most. Ultimately, I’m left with Pick The Better Football Team. There’s nothing more fundamental than that.