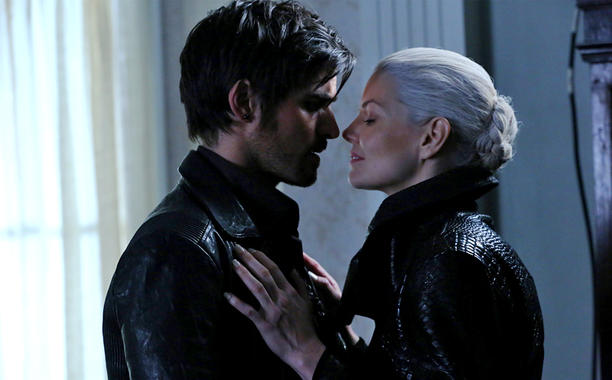 That being said, there were still some awesome things about this week’s episodes; namely the return of three major characters. Dr. Whale made an appearance in the first half of the episode, while Ruby and Mulan came back for the second half.

The writers did an excellent job of bringing Ruby back in order to explain her absence. This was appropriate since she was just there one season and gone the next. While it was a weak way the writers tied her into the Dunbroch storyline, it was exciting if only because we finally got some closure on what happened to her character after season three of Once Upon a Time. It was also interesting to see how Mulan dealt with being rejected by Aurora back in season two; even though she was a bit of a baby in regards to her three seasons of wallowing. Who knows how much real life time that was…

The best return of the episode, however, was Dr. Whale’s. His whole interaction with Zelena and Regina was gold. I love when a show isn’t afraid to break the fourth wall, and this episode of Once Upon a Time did just that. When Dr. Whale returns with a dye job (which David Anders has been sporting for his new role on iZombie), Regina takes a crack at it rather than glossing over it. This results in the funniest two lines of the special: “What’s with the dye job?” “Oh so Emma changes her hair and no one makes a fuss but I get ridiculed.”

Also hilarious was when Dr. Whale mentions the whole babynapping incident that occurred last time he and Zelena were face to face, to which she retaliates saying that she thought she killed him. Turns out, she merely threw him against a wall, a tactic which is repeated this episode by Emma. Poor Dr. Whale can’t catch a break.

I enjoyed the writer’s decision to bring back these older Once Upon a Time characters that had previously dropped off the map. It was a great way to remind viewers how large and different the cast used to be, and how easy it is to forget about some of the audience’s favorite characters when their storyline is left unfinished. Which reminds me, does anyone know what happened to Lancelot after he and Merida escaped Arthur’s dungeon?

We can start to wonder about that seeing as we finally found out why Emma went dark back in Camelot during last night’s episode of Once Upon a Time. I feel like we’ve been waiting extensively for some sort of real answer that the whole two hours could have been focused on. In the end, however, what the audience was given felt rushed.

We learn that Hook’s life was threatened when he was cut with Excalibur, a wound that was unable to be healed even by Emma’s magic. Because Emma’s scared to lose another boyfriend, she decides that the best situation is to tether Hook to Excalibur, ultimately making him a second Dark One.

This arises a few issues with me: 1 – Is this a thing now? Because they never even hinted a second Dark One was a possibility. 2 – If that’s true then why didn’t Hook realize he had magic until now? 3 – What happened to Merlin after whatever that swirly stuff was went out of him and into Hook? Is that why we haven’t seen him in Storybrook? And the most important issue: 4 – How selfish is Emma?

I know that we’re supposed to feel badly for Emma when she thinks she’s about to lose Hook, especially right after such a great scene for them as a couple. And while I did feel sympathy for her after having lost Neal, all I could think about was how awful she was to do this to Hook. Hook has been fighting the Dark One all his life. He says it himself, “I don’t want to become that.” And yet Emma ignores the fact that he’d rather die than become the thing he hates, and keeps him around because she’s too scared to face life without him.

Although you can argue that Emma’s current attempt to use Excalibur to eradicate all darkness (sidenote – called it!) within Hook and herself is an, albeit misguided, attempt to right her wrongs, I’m with Hook on this one. What she did was inexcusably selfish. I’m certain that Hook will be able to fight his new darkness, but who knows how long that will take? She definitely ruined her chances with him.

With that settled during the first half of the episode, Once Upon a Time took us back to Dunbroch by attempting to link Merida’s newest conflict with Arthur’s attempt to retrieve Excalibur. It was an interesting but unnecessary connection because all of the flashbacks made it hard to keep track of what was going on when.

I loved the Merida storyline, and how she had to learn to not doubt her father or herself, but it could have been saved for a different day without the Camelot link. Especially since the first half of the special made it seem like we were going to learn more about what happened in Camelot with the Storybrook gang. The one good thing that did come out of it, however, is that now Merida has got it out for Arthur as well.

This episode wasn’t at all what I was expecting, but not necessarily in a negative way. While Sunday’s episode of Once Upon a Time did have its unimpressive moments – like that disastrous, unchoreographed fight scene between the people of Dunbroch and Camelot – it also finally gave us the answers that it’s been teasing all season long.

In the end, the audience shouldn’t complain much. I’m also excited to see how they delve into Hook’s new darkness, and how he changes as a (possible) villain for the second time in his life. Speaking of which, yay for Hook and his smolder finally getting more screen time!