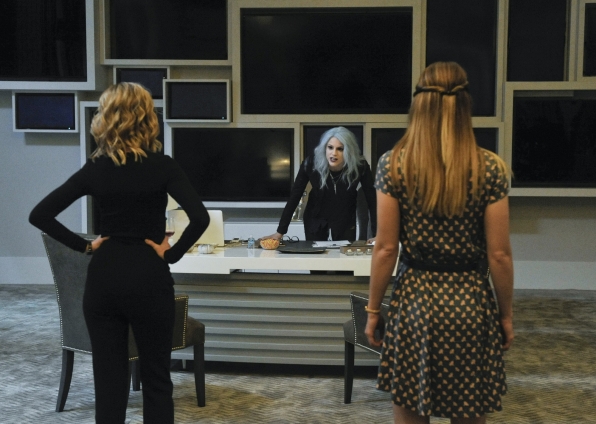 In celebration of the approaching holidays, Supergirl had a turkey and sentiment filled episode this Monday night.

Alex’s mom and Kara’s foster mom, Eliza Danvers, pays the girls a visit for Thanksgiving. This has Alex understandably stressed out with the implication being that family holidays are rough. Eliza was always easier on Kara, which caused Alex to develop a bit of resentment towards her mother. As someone who has an older sister, and a slightly overprotective mother, I can attest that their ensuing argument was realistic. Thankfully, Eliza and Alex have a heart-to-heart near the end of the episode, and things start to look better for the Danvers clan.

As Kara tries to act as a buffer to her mom and sister, she also has plenty on her plate – besides chocolate pecan pie, “the best dessert in the galaxy!” – with her alter ego as Supergirl.

Similar to last week’s episode of Supergirl, this installment featured a monster of the week straight out of the comics. It was Livewire, aka Leslie Willis. After Leslie crosses the line by mocking Supergirl’s adorkableness – heathen – Cat punishes her by sending her on a helicopter ride on the set of the movie Twister. Lucky for Leslie, Supergirl doesn’t hold a grudge and saves her life anyway, only to cause Leslie to get second hand electrocution through Supergirl herself.

When Leslie wakes up with the ability to manipulate electricity and some new hair – why does becoming a supervillain always comes with an equally evil new look? – she renames herself Livewire and goes on a Cat hunt. Cat and Supergirl team up to take down Livewire, and Kara’s two jobs collide for the first time. Cat then seals her position as one of my favorite characters when she addresses Hank as, “excuse me agent, Mulder is it?”

As we already started to see in episode two of Supergirl, Cat has a sweet side to her, one that came out this episode in relation to Supergirl. Not only do we realize that Cat actually feels protective of Supergirl once Leslie starts badmouthing her, but that she also cares about her assistant Kara. And while we know that’s the same person, Cat does not. So technically she cares about a shocking total of two people.

I enjoyed the juxtaposition of Cat’s well meaning ruthlessness in comparison to Leslie’s outright maliciousness. It was a great example of how the mean girl can sometimes have a soft side to her, while others are actually just terrible people. The other juxtaposition of Cat and Eliza was also wonderfully executed. Both Cat and Eliza had some great moments of realization this episode, and it was a great choice for the writers to mirror the two as each person came to terms with their respective mommy issues.

The biggest revelation of Supergirl, however, is that Alex’s dad, Jeremiah, was working for the DEO when he died, more specifically Hank Henshaw. In a flashback, we see that not long after coming to Earth, a young Kara convinced Alex to sneak out for a joy ride (or shall I say joy fly?). Hank and the DEO catch wind of this and pay a visit to the Danvers family in search of Kara, only to settle for Jeremiah instead.

Hank is in for a rough time now that Kara and Alex are onto him, which is exciting since the writers have been alluding to Hank’s role as a double agent without much fruition up until now. I hope we finally get to see what’s going on behind those cyborg eyes, and what exactly Hank is up to. Followed by some major ass whooping courtesy of Kara and Alex.

Speaking of ass whooping, come someone knock some sense into Kara already? Winn was such a cutie this episode, and yet the only person Kara had time to care about was James, who, by the way, is being way too flirty for someone who has a girlfriend. Winn is a much different character in the comics, but the most notable thing about him is that he’s a villain. It worries me that Kara overlooking Winn is going to cause him to make like Shane from The Walking Dead and turn evil.

I’ll have to continue to root for Winn until that happens.