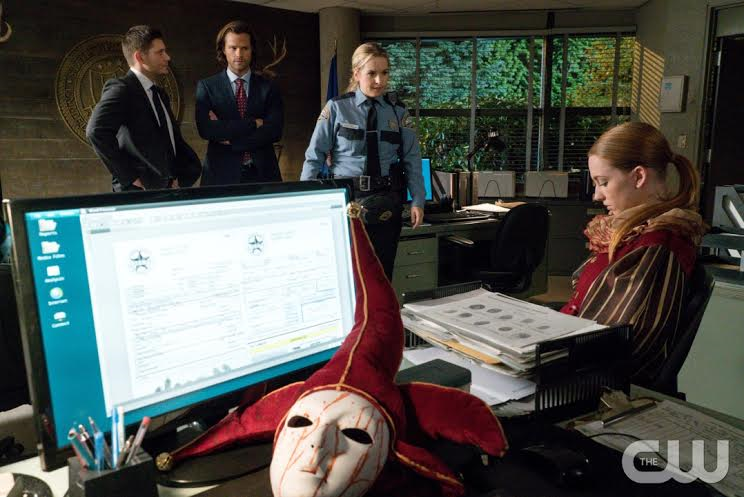 Supernatural needs to stop playing with my emotions immediately. They are back to a monster of the week format, and I’ve already written countless times about how much better this show is when it goes with that style of episode. I’m glad we got another episode like this, but it’s only going to leave me disappointed if they switch it back anytime soon. A purely story-arch episode is good every once and while, but the majority need to be just like this one.

This episode of Supernatural had some fantastic writing, and brought back one of my favorite supporting characters: Sheriff Donna. She embodies Minnesota, and her presence on the show is perfect. She refuses to curse, so phrases like “Up poop creek without a paddle” are just so much better when she says them. It was also worth watching this episode just for all of the rabbit jokes Dean makes in the beginning. Sam had a great zinger as well, so I don’t want to leave him out.

These jokes were inspired by the super creepy rabbit masked killer they must deal with after Sheriff Donna gives the Winchesters a call. It was the first of a few creepy masks and outfits worn by the killers throughout this episode. I actually feel like the writers were trying to see if they could come up with anything more terrifying than Amara has been, and they came close. Here’s a quick ranking of the masks/outfits in this episode by how scary I thought they were based on my own, completely rational criteria:

The Rabbit is in 1st place for obvious reasons. Did you see that beastly thing? Anyone smart 100 percent would not want to wake up with that looking over their bed in the middle of the night. That goes for the rest of them as well, but the rabbit is the one I would LEAST want to see. The deer head gets 2nd place because it’s the little kid that wears it, and we all know how I feel about creepy children.

The clown is in last place because they aren’t scary. I don’t understand why countless people are terrified of clowns. They are just regular people with some make-up on. Granted, they can be eerie at times, but they will always come in last with my rankings of scary things. If you’re scared of clowns just quit being a baby and be scared of something way more rational, like spiders.

All of these costumes were once the property of our killer, now a ghost, who was a children’s performer when he was living. Which is ridiculous because there is no way in hell anybody’s parents were okay with someone wearing that bunny mask around their kids. Just not going to happen in any real or fictional universe.

We only got a small mention of The Darkness or God in this episode and it is at the end when Sam reveals to Dean that he thinks God is showing him Lucifer’s cage in Hell (told you). This doesn’t lead to anything other than hinting at Sam maybe thinking he needs to go to Hell or get into the cage. It wasn’t obvious what Sam was thinking, and I’m sure that’s how the writers wanted it.

This Supernatural episode was definitely one of the best of this season. I hope they keep up their perfect balance of humor and terrifying monsters to fight. That is what Supernatural has always been best at, and nothing has changed.