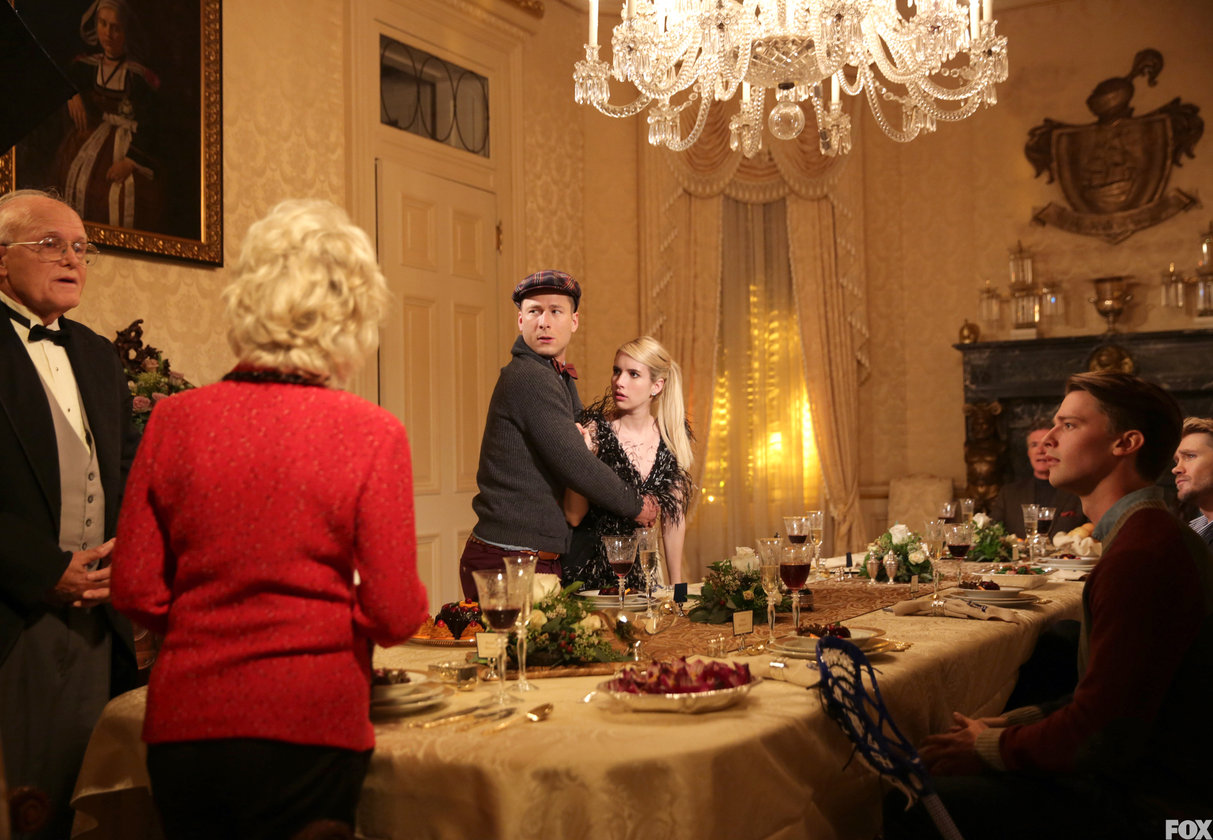 Chanel’s outburst at the table is interupted by Hester’s arrival.

I literally did not see half of what went on during last night’s episode of Scream Queens coming. Perhaps I should have a little, at least with Gigi – the line, “just wouldn’t be Thanksgiving without the whir of a small motor cutting through flesh,” should’ve clued us in. But most couldn’t have predicted Wes being the bathtub twins’ baby daddy.

I know that a few people still think that Grace is one of the Devils, since she’s hardly been a target. However, I’d like to pose the theory, now that we have this new information, that maybe Boone and his sister knew that Grace is their half sibling, and that’s why she’s had it so easy.

Now that Gigi is dead, though, none of the Kappas, or more importantly, Grace’s dad, will ever know that Gigi was the ringleader. This means she died a victim in everyone’s eyes, and I worry that this may hinder Pete’s “investigative reporting” (I die every time he says this, because everyone who’s ever taken a journalism class has encountered a Pete).

One thing that even Stevie Wonder could’ve seen coming was that Hester wasn’t actually dead – you don’t just kill off Lea Michele. Hester shows up to the Radwell house for Thanksgiving, shocking the only person to actually believe her dead, Chanel – what, it’s not like she checked her pulse, what is she a registered nurse?

Unfortunately both Hester and Chanel receive the wrath of Tad, Brad, Chad, and Thad (and Bunny and Muffy) who berate them unnecessarily during a tampered game of Pictionary. The girls finally bond when they ditch the Radwells in a scene that finally shows a softer side to Chanel Number One. I’m glad the girls are finally embracing their sisterhood, because now they can focus their collective bitch-power on finding the last Devil standing, which was a big part of Tuesday night’s episode of Scream Queens.

After a variety of unfortunate circumstances, all of the remaining Kappas, plus Dean Munsch, Pete, Chad, and Wes, end up at the Kappa House for what I’d like to dub Kappasgiving. Dean Munsch leads the gang in a game of Guess Who that led nowhere, but may have been the biggest clue towards who the remaining Devil actually is: Chanel Number Five.

Earlier in the episode of Scream Queens Gigi says that the Devil will need to return to the Kappa House so that she’ll have an alibi. Later, Number Five shows up with the weakest excuse of all the Kappas: her parents forgot to tell her they were going to the Maldives. We got to see the rest of the Chanels’ plans fall through, all except Number Five.

Not to mention, she was one of the only people to not be discussed as a suspect during the episode. Last but not least, she’s escaped being murdered not once, but three times, which is a little fishy. No one really suspects her, and maybe she’s been using that to her advantage.

Two things that had me a bit disappointed this episode of Scream Queens were that 1. Chad and Chanel broke up again only to get back together minutes later, and 2. Carrie Fisher wasn’t in it. I love Chad and Chanel, they’re cute and definitely entertaining. I’m not saying that I didn’t expect them to get back together, because clearly that’s a running gag now, but there was an air of finality to Chanel’s (super empowered) speech this episode, that I thought would at least have them broken up for an episode or two.

And let’s talk about how dumb the writers, casting directors, and producers of Scream Queens were to not cast Carrie Fisher to play her real-life daughter’s on-screen mom. Carrie Fisher would totally have been able to play the role of Chanel Number Three’s crazy, uncaring, and neurotic mother, and I can’t help but be pissed at what a missed opportunity that was. I’ll give everyone working on Scream Queens the benefit of the doubt and say that MAYBE Carrie Fisher was too busy working on Star Wars to make a cameo. But still, you can’t deny it was a big let down when the camera panned to a Carrie Fisher lookalike instead of the real deal.

Next week’s episode of Scream Queens will pick up on Black Friday, so we know that’ll be a great episode for Chanel. So until then, Happy Kappasgiving, guys.