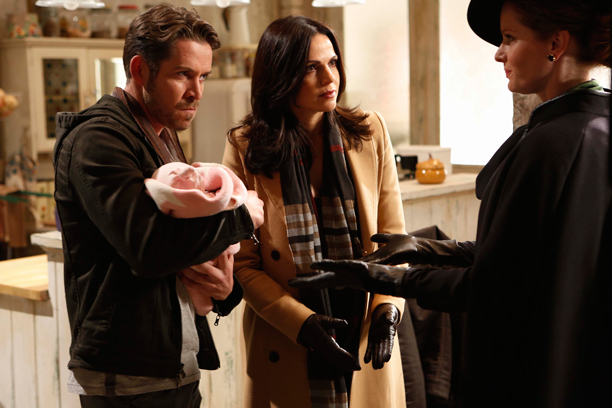 Last night’s episode of Once Upon a Time FINALLY filled in all the blanks, and to be honest I was a little underwhelmed. Not that Hook becoming the Dark One isn’t cool, or interesting, or whatever – it does provide for an awesome couple’s name: the Dark Swan and Captain Dark One. But, once again, the ascent to darkness was more than a little rushed, which ended up making what could have been two great episodes fall a bit flat.

Now, I get it. Next week is Once Upon a Time’s midseason finale, so they needed to start moving things along. But after last week’s non-episode and the previous week’s disaster of an episode about Merida (yeah, yeah, I know, they needed to tie her in somehow), you’d think they could have found somewhere to put an extra episode concerning Hook’s transformation.

We were supposed to be upset that Emma had selfishly turned Hook into the one thing he hated most, because we knew that he’d have trouble not accepting that role. So couldn’t the writers have drawn out this conflict inside of him: part of Hook wanting to hold on to Emma and the light, and the other part wanting to accept the darkness and finally get revenge? It would have been much more compelling, and honestly, way less annoying than I found the super angsty scenes between Emma and Hook.

We already knew that love could mute the darkness; Hook showed us that previously with Emma. But during last night’s episode of Once Upon a Time Hook only held onto that for about five seconds until he totally flipped a switch, and why? Because he thought Emma was trying to control him? There should have been more of a struggle within him, something more than just revenge and mistrust to drive him completely into the darkness when he had been so in love with Emma just minutes prior.

And then there was the matter of ANOTHER dark curse. Yeah, that was really the only answer behind their being back in Storybrook, but having Hook cast the curse only to have Emma hijack it just seemed a little overplayed and uninspired. I had the same sentiment when Hook stole Emma’s memories. Can’t there be conflict and an enemy to face without having to resort to curses and memory loss in Once Upon a Time?!

Lastly, I was upset by the way that the writers of Once Upon a Time sort of just threw Merlin away. I understand the logic behind Hook crushing his heart (mostly), but it seems like it was just an easy way to get around the whole “splitting your heart so you don’t actually have to kill the person you love most” thing. I had wanted a Hook and Merlin smolder showdown, but not like that. RIP Merlin. I’ll mourn your beautiful face forever.

It was good to finally have it confirmed, however, that Emma never went fully dark. She was just embracing her darkness in an attempt to save everyone she loved, which when you think about it is typical of her. Also typical, however, was her belief that she had to do it alone. Because we all know she probably would have fared better if she had sought out the help of her family. Like Emma said, there was no one around to tell her she was being stupid. Which she was. She needed her family’s love and support to stay grounded and figure out how to save Hook from himself. Her plan probably would have worked considerably better had she actually held onto the love like she told Hook he needed to do.

Luckily, Emma has literally the best kid ever. Henry didn’t have to forgive Emma for what she did (you know, ripping out his girlfriend’s heart only to break his). But because Henry is perfect, he chose to forgive Emma, just like he did with Regina. It was great to see Regina and Emma’s first season roles reversed for these past few episodes, but it was even greater to see Emma prove that he could trust her again.

Change is such a big theme for Once Upon a Time. So, even though Rumplestiltskin’s was a bit rushed like I said previously, it was satisfying to see him continue that change this episode. He’s grown so much that, not only did he beat Hook in a fair way, but he also decided that he was bigger than killing him – even though I have no idea if this was the right decision.

Now if only Belle could stop being dumb and hurt so that she and Rumple can finally get back together. It seriously looked like that’s where they were heading these past few episodes of Once Upon a Time, and I was almost as crushed as Rumple was when Belle said she couldn’t forget the pain he’d caused her in the past. My heart literally broke when Rumple said, “not wanting me to die isn’t the same as wanting to be with me.” But I predict that sometime in the near future Belle will change her mind and all will be right in the world. Fingers crossed.

Another person that appears to be changing is Zelena. As Regina and Emma have both proven, having a child can better you as a person. More than anything that’s what Regina is hoping for. They may never be able to become sisters, but I have hope for Zelena to finally accept the change that Regina wants from her. Even so, I find it hard to completely hate Zelena, because, just like her sister her spunk and sassiness has slowly begun to win me over. If she keeps having lines such as, “once you go green, you’ll never go queen,” she may just become one of my favorites.

Like I said, next week’s episode of Once Upon a Time is the mid season finale, and it’ll be all about the hoard of Dark Ones that Hook brought from the underworld. Not gonna lie, I was a little disappointed with that reveal because I had read that the spring season would be all about Hell, which someone predicted would mean characters from Disney’s Hercules, one of my favorite movies. Though it’s not quite as exciting as I’d hoped it’d be, the Storybrook gang battling it out with every Dark One to exist is extremely compelling, and quite possibly the biggest baddy that they’ll ever have to face. I’m excited to see how the writers tackle it.