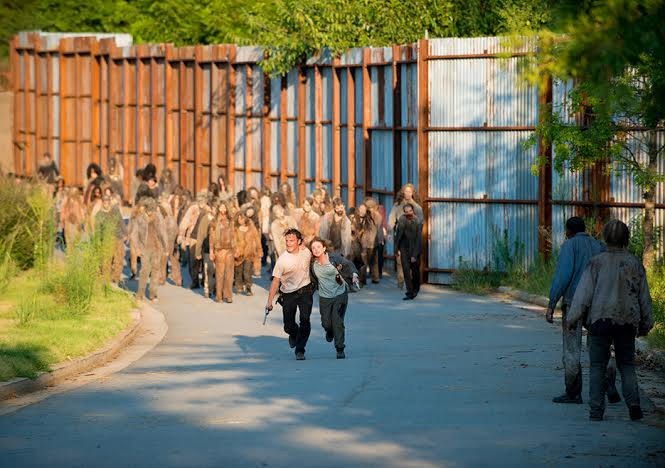 So I was recently accused of having a “nerd-boner” for The Walking Dead and all I have to say to that is this – you’re damn right I do. I fail to see how that is remotely a negative thing, and I will continue to gush over this show as long as it keeps being the greatest thing to happen to television in recent memory.

Before I get into the bat-shit craziness that was the mid-season finale, let’s take a look at how our Kill Count is shaping up:

As you can see, Rick has finally solidified his place as the top dog of walker killing in The Walking Dead and all is right with the world again. We just need Daryl to get into a close second and this will all look better. I added Carl and Maggie to the list because they both got some kills this episode, and I have a growing faith in Carl as a character. More on that later, though.

I’ve made a couple predictions in my reviews of The Walking Dead during the last couple weeks, and I’m a little ashamed that I’ve been wrong pretty much across the board. Last week I said that the walkers probably wouldn’t all get into Alexandria at once, and I could not have been more wrong. The entire horde of walkers squeezed inside the walls in a matter of seconds and began to wreak havoc on everything inside.

I also made the prediction that the voice calling for help over the walkie-talkie a couple weeks back was probably Glenn. However, we learned this episode that it was actually Eugene’s voice Daryl heard. Oh well, I can’t ALWAYS be right. Plus I still have high hopes that my predictions about Spencer’s demise will come true soon enough.

This episode was truly The Walking Dead at its best. We got significant action mixed in combined with the perfect amount of dramatic moments. The most drama came from an altercation between Carol and Morgan that was a long time in the making. Bad-ass Carol just can’t wrap her head around Morgan’s “all life is precious” policy, but really, who can? This leads to her attempting to kill Morgan’s prisoner, and forcing Morgan to knock her unconscious with a body-slam that would make even The Rock jealous.

Of course, Morgan has his own medicine used against him when the Wolf prisoner knocks him out with his own stick. Their little squabble also leads to Denise being taken prisoner and out into the walker-infested world that is Alexandria. Way to go, guys, way to go. Now who’s going to pretend they know how to be a doctor?

The most intense action in this episode of The Walking Dead surrounded Rick and company as they barricaded themselves in Jessie’s house, only to have Ron (somebody kill him already, please) ruin it all when he attempts to murder Carl. The following scene is actually where Carl finally proved to me that he has potential to live up to the Grimes name.

Earlier Ron accused Carl of his father being a “killer” which is valid, but he only kills people who deserve it, like Ron’s dad. Well, Carl’s later response to this was to look Ron right into the windows of his soul and say “You’re dad was an asshole.” BOOM. It’s not that clever, but this is big step up for Carl and I’m happy he’s living up to the bad-ass his name entails.

This episode of The Walking Dead also solidified a Grimes as the official leader of Alexandria, not that it’s much of a community now. Deeana is bitten by walkers and in turn, bites the dust herself. She actually had my all time favorite reaction to finding out she was infected, which was “Well, shit.” Really couldn’t think of a better way to put it myself.

Rick and the gang go real old school The Walking Dead to escape the house by covering themselves in walker guts to mask their smell. This method is tried and true, and they always bring it back at the perfect moment, so it never just seems like some fail-safe they could use at any moment. The plan is going great and they get out of the house into the giant horde of walkers when Jessie’s other son Sam decides to ruin their cover by starting to have a minor freak out. Seriously? Rick and Jessie need to never procreate because all of their existing children are useless and stupid. The Walking Dead also picked Sam’s freak out as the moment to end the show and fade to black, leaving us wondering just how it will all work out.

I have a love-hate relationship with The Walking Dead and its mid-season finales. They tend to be my favorite episodes, like this one, but it also means the show will be going on hiatus for a couple of months and that is just depressing. I’m upset that the season is half over already, but the mid-season finale got me super pumped for what’s to come.