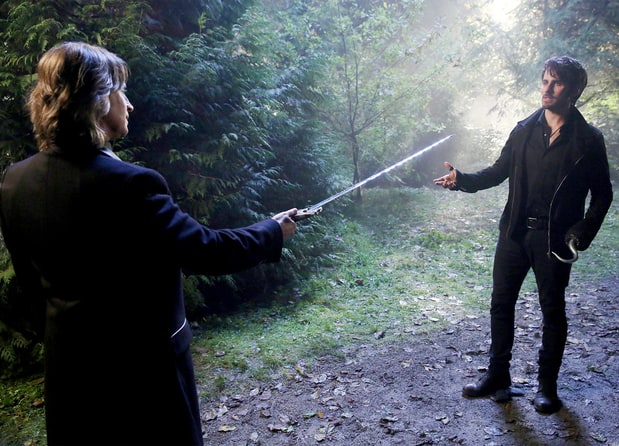 In anticipation of Sunday’s episode of Once Upon a Time, entitled “Swan Song,” a friend of mine from work and I discussed who we thought would be the one to kick the bucket. Because with an episode called “Swan Song” someone has to die, right?

There were many suspects on our list, the most logical being Emma Swan (you know, because of the whole last name pun thing), as well as Hook and Rumplestiltskin. We hoped that it would be Zelena, but we didn’t think that would be likely. Unfortunately we were right, Hook is dead, and I’m devastated. Well, for now he is, but we’ll discuss that later.

I am excited that even though Zelena isn’t dead, she’s the next best thing, gone. Which is fine by me, because I decided this episode that I’m officially over Zelena’s betrayals. I’m always too willing to believe that this time will be the time that she changes, and I’m always wrong. The scene where Regina banished Zelena to Oz was a bit random and over emphasized, which makes me doubt that her disappearance will last long, either. But at least for now, ding-dong the wicked witch is gone!

Before we move on to talking about the real meat of the episode, Captain Guy Liner, let’s talk about another person who took advantage of my trusting personality during Sunday night’s episode of Once Upon a Time. That’s right, I’m talking about Rumplestiltskin. I totally called that Belle would find out that Rumple had sent her away and professed her love to him as a result, but what I didn’t see coming was that he would turn around and deceive everyone.

There’s got to be something wrong with Belle and me that we keep wanting to see the best in Rumple. I actually screamed “yay” when Belle kissed Rumple this episode of Once Upon a Time. That, of course, was before he let Hook die for nothing, and became the Dark One again. Hook was right when he said that Rumpelstiltskin doesn’t care about anything or anyone more than he cares about his power.

I’m furious that Rumple led Belle to believe that he was still good, and still a hero, when in reality he was more than happy to steal his powers back. And now he has the combined power of every Dark One that ever lived. Awesome. I really wanted Rumple to live happily ever after with Belle, but now I can’t wait for her to find out and leave him for good. I’m down to trade either Rumple or Zelena for Hook, thanks.

I already miss Hook. What will Once Upon a Time be without his gorgeous face? Life will have no meaning now that he’s gone. Although, it wasn’t until this episode that I realized I basically know nothing about Hook. Well, besides the fact that his eyes are bluer than any of the seas he’s ever sailed. That’s part of the reason this episode was so great, we finally got to learn more about who Killian Jones used to be. Another reason was that we got to see Evil Queen Regina in the flashbacks, who I had missed.

For some reason, I never totally believed Hook when he talked about what a bad man he used to be. There was no way that the sweet Hook we’d seen with Emma could ever be as bad as he said he was. I thought that in looking back on his past he had exaggerated his viciousness. The scene where he tells his dad that he’s sparing his life only strengthened this belief. Obviously, I instantly changed my mind around the same time that he did and decided to murder his dad while his little brother slept.

Speaking of which, I’m so used to Once Upon a Time weaving together so many stories and fairytales that I was certain that Killian’s dad would be another one of those times. It felt like the writers were trying to allude to another story as a sort of Easter Egg. Unfortunately, I couldn’t figure it out for sure, and now I’m left with two questions: who was his father’s nurse that was also his true love’s kiss? And what happened to Hook’s little brother, Liam the second, after Hook killed their dad? Will we ever find out?

After learning just how bad Killian used to be, I was glad to see Hook kind of make up for all of his wrongdoings of the past. It was brave of him to sacrifice himself for Emma and her family, and it was significantly more redeeming than Rumple’s half assed attempt a few episodes ago. I was also proud of Emma, because even though she had been selfish and refused to let him go previously, she realized her mistake and this time allowed Hook to make the sacrifice.

I know that I’ll sound hypocritical when I say this, because of all the shit I gave Emma for keeping Hook from dying, but I can’t wait for her to bring him back. I never said that she should have let him die, just that she shouldn’t have turned him into a Dark One! This is the way it should have been done, and now that she’s doing it the honorable way, I have no doubts that she will succeed.

Although, I will say this, I don’t understand why everyone – Snow, Charming, Henry, Regina, and Robin – is going to the Underworld with Emma. Like, isn’t that what they fought against the entire episode?

As usual, Once Upon a Time’s mid season finale was amazing, there were so many emotional scenes that had me on the verge of tears, specifically when Snow, the mother of all hope, gave up and accepted her fate. The episode definitely did its part in getting us excited for the winter season, which will be a much needed break from Once Upon a Time‘s usual settings. I’m excited to see just how bad hell actually is, and maybe even run across Hades, Pain, and Panic? A girl can dream.